The government returned over 400 artifacts to Iraq from a raid by U.S. Special Operations forces last May, according to reports. The goods were recovered during the search of an Islamic State leader’s home in Syria, according to the Washington Post.

The items are part of ongoing efforts to repatriate art looted from cultural heritage sites.

Among the objects recovered were an Aramaic religious text suspected to be nearly 500 years old, hundreds of coins from the Abbasid era and Umayyad period, and cylindrical stone seals from the ancient Iraqi city of Nimrud, according to officials at the National Museum of Iraq in Baghdad.

In recent attacks on Nimrud, ISIS militant groups destroyed ruins dating to the 13th century BC and a palace dating to 879 BC, according to the Los Angeles Times.

Museum officials told the Washington Post that they were unable to determine whether the objects hailed from Iraq or Syria originally, and authorities from Iraq, while they are accepting the objects, said it was too early to verify whether the pieces were from IS-controlled archaeological sites.

Some experts have even questioned the authenticity of the objects all together. An archaeologist in the criminology department at the University of Glasgow, Donna Yates, posted a side-by-side comparison of the world famous bust of Neferiti from the Egyptian Museum of Berlin to a small, stone version found in the raid to Twitter, writing: “some (maybe all) of the ‘Iraqi antiquities seized from ISIS in Syria’ are fakes.”

Dear media: some (maybe all) of the "Iraqi antiquities seized from ISIS in Syria" are fakes. https://t.co/zKgif7MUqT pic.twitter.com/G1aVIYPxht 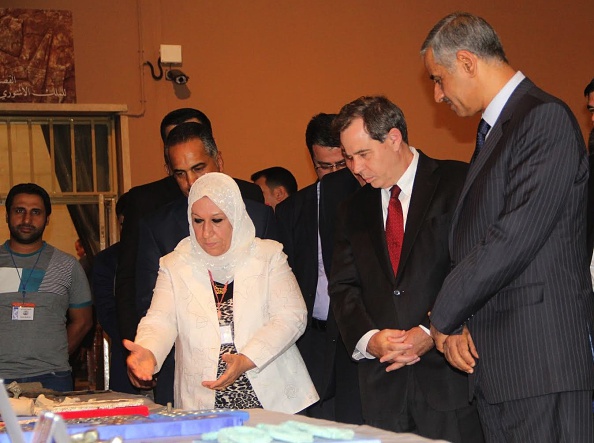