After months in the works, Vice finally launched Broadly, its channel for women’s news.

The new facet of the historically bro-ish media company’s coverage sprung up today, along with a Broadly Twitter account and the channel’s first article. A number of past stories fitting the coverage have been tagged to the new channel as well.

On Twitter, Broadly’s coverage is described as: “Sex, politics, culture, witchcraft. Women’s news you thought would exist by now.” Appropriately, the first Broadly article is a longer read titled, “Why Satanists Are Fighting America’s Restrictive Abortion Laws.” Previously published articles posted to Broadly today have themes ranging from motherhood and rape to Soul Cycle spin-offs and the lives of strippers.

Videos are on the way as well. Shannon Kelley, who is spearheading the launch along with former Jezebel editor Tracie Egan Morrissey, told The Hollywood Reporter that Broadly will be video-driven.

“I just knew that no one else was really doing original video reporting for women,” Ms. Morrissey, who left Jezebel to launch Broadly, said in an interview with Capital New York.

One show titled How (Blank) Found Feminism will tell the stories of what what led public figures to declare themselves feminists. Another, A Day in the Life, will examine women’s careers and lifestyles, from a ballerina to a bullfighter.

Ms. Morrissey reportedly claimed that Broadly doesn’t have a launch sponsor, but because a decent portion of Vice’s content is already sponsored by advertisers, it’s probable that branded content will appear on the new channel as well. Fashion and makeup, for example, are categories of coverage that see a lot of sponsorships. Broadly will be covering both, and there are already plans for a fashion-focused video series called Style and Error that will aim to make high-end fashion more accessible, according to The Hollywood Reporter.

UPDATE: The headline for this story originally stated that Broadly “officially” launched. Vice later informed the Observer that they haven’t launched officially but did begin teasing out content and will launch fully later this summer.

We’re not quite sure what makes a launch official other than a big revel, but new Broadly content is continuing to be posted. 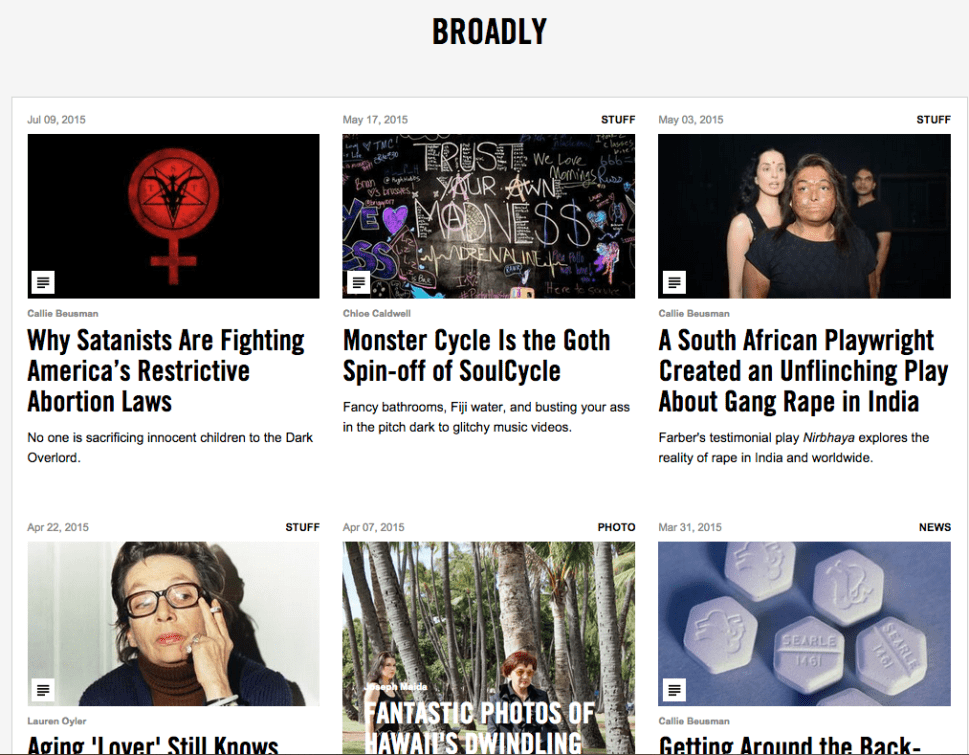