This week’s installment of the Wayward Pine WTF recap is going to be slightly more WTF-ier than normal. Last week, due to some circumstances that are only slightly less horrifying than getting blown up during your first sexual encounter, I completely missed watching and writing about Wayward Pines. I went into this episode, titled ‘A Reckoning,’ without even trying to catch up, because how much could I have really missed and oh my god that kid is just shotgunning people in the head. Who is this guy? Wow, he is just shotgunning everyone this is awful.

Okay so maybe I should catch up a little. Apparently last week the town insurgents decided a music box bomb was too subtle so the plan changed to “drive this motherfu*king truck through the fence.” And it worked like gangbusters until the abberations showed up and ate everyone’s faces.

So, here we are, and before an abberation can get through the truck-sized hole in the fence, sheriff Ethan shows up in his trademark black matched with black paired with black and stops it. Which brings me to the first of what I’m sure will be many asides: Don’t the abberations seem “not that bad?”

I don’t mean “not that bad” as in aw they’re just misunderstood. I mean really the only terrifying thing about them is they eat people. But lions eat people and we’ve got that pretty much under control (or do we?). Right now, there’s nothing about the abbberations that makes me think a group of people, doesn’t even have to be that big of a group, couldn’t line up on top of the fence with some guns and take them out. And yeah, these bloodthirsty cannibal monsters make up like 90% of the world’s population now, so admittedly that’s a lot of bloodthirsty cannibal monsters to deal with, but it can be a gradual process people. You’ve only had 2000 years to deal. Alls I’m saying is, everyone thinks it’s hopeless and then one guy comes along and is like “have you tried shooting them with a gun and/or running them over with trucks?”

But anyway, where were we? Oh yes, Ben is in the hospital eating some truly disgusting looking pudding. I guess Ben’s alive, but does he really want to be when Wayward Pines’ hospital pudding is that disgusting looking? Oh, also I guess Amy, the only high school girl in existence somehow more desperate for bonin’ than a high school guy, has some brain swelling going on. That’s a major bummer, but on the bright side apparently all the crazy first generation high school wackos look up to him now. Look at the way they gather outside the hospital, just rhythmically clapping. I broke my ankle twice in high school and not one of my classmates stood outside the entrance to the hospital mindlessly clapping in unison like one of those cymbal monkeys. Which brings me to another aside: The people behind Wayward Pines have three different views of the high school kids clapping.

Three?? They have three separate cameras trained on the hospital steps, and you’re going to tell me anything in this town happens without them knowing? Maybe they should take one camera away from the hospital entrance and focus it on the shadowy back table at the restaurant where people always seem to be talking in pig-Latin with their hands over their mouths.

But, anyway, Ethan’s having a rough time as well, because the whole town wants Kate and her crew to be reckoned. This kid Jason, who was Class 1 at the Academy whatever the fuck that means, really wants Kate and her crew to be reckoned. So much so that he barges into the sheriffs office and demands something be done to them. Sweet, sweet Arlene Moran (cousin of Lucy) refuses, so Jason respectfully leaves and that’s the last we see of him. Just kidding, Whoa boy. I genuinely did not expect to see an actual “get on your knees while I blow your head off with a shotgun” moment on a FOX show. But that happened. Man, did that happen, despite Kate’s argument that Jason was “such a good kid.”

“One crack in the ark and it all goes down,” Jason argues, which is true unless you have, like, Scotch tape or something I don’t know. Regardless, Pretty much all the incarcerated insurgents get their heads duly shotgunned, until Ethan arrives and saves only Kate. Because of course he does.

Meanwhile Theresa, that clever detective of a woman, finally investigates Lot 33. Turns out it’s some sort of broadcasting station, and there’s videos of people all over the country who made it far enough out of the fence to realize the human race is good and fucked. Kate sees this, but Kate is still pretty convinced that the best course of action is for Ethan to kill her in public. “If someone’s going to do it, I’d rather it be you,” Kate tells Ethan, which is the most romantic plea for murder I’ve ever heard.

And Ethan, that romantic, obliges. Or so it seems. He tells Filcher he needs the whole town assembled to watch him kill Kate, and assemble they do. But it’s a swerve. Ethan doesn’t kill Kate, he just launches into an explanation about how the world has ended, and Dr Jenkins is really Dr. Pilcher and he controls everything. My favorite thing was Ms. Fisher yelling like a particularly drunk and rowdy concert-goer “how dare you say his name Kate how dare you!” And then Theresa silencing her with probably the weakest slap in TV history. Gold. Pure gold.

Before the townsfolk can decide whether or not to believe Ethan, David Pilcher pulls one of those vengeful-God moves and shuts down all the electricity in Wayward Pines, including the fence that keeps out the abberations. Which, in the long term, doesn’t seem like the best idea but then again we’re talking about the judgement of the man who thought he looked good like this.

This whole thing, the entire last five minutes or so, brings me to my last aside. This is the big one: Why are most of the adults in Wayward Pines so cool with murder?

I’m not even talking about the first generation kids, or anyone that seems to know the truth about Wayward Pines, like the insurgents. I’m talking about the normal townspeople, the ones who were gathered screaming “kill her!” when Ethan brings forward Kate. What the story seems to keep forgetting is that these are regular people. They still think it’s 2014! Most of them still think that outside Wayward Pines, the Earth is still there. If one day you woke up in a woodland town, and things just sort of seemed off and they kind of wouldn’t let you leave, would your mindset really be one of loyalty? So loyal, in fact, that you start calling for the murder of anyone that threatens the town? You’re telling me that Pilcher can’t tell these people the truth because they can’t handle it? Looks to me like they can handle some pretty extreme developments in their lives.

I don’t know. Maybe i’m interpreting everything wrong. Is everyone either an insurgent or a person who knows the truth? Because there’s got to be at least one guy who is in neither category. Just mowing his lawn in total ignorance, just content with living in Wayward Pines knowing nothing. “Man this town is weird sometimes,” he might think occasionally, while Ethan is running around doing his thing, “Oh, is that my phone ringing? Guess I better grab muh pitchfork.”

Where’s that guy? Give me a show about that guy. 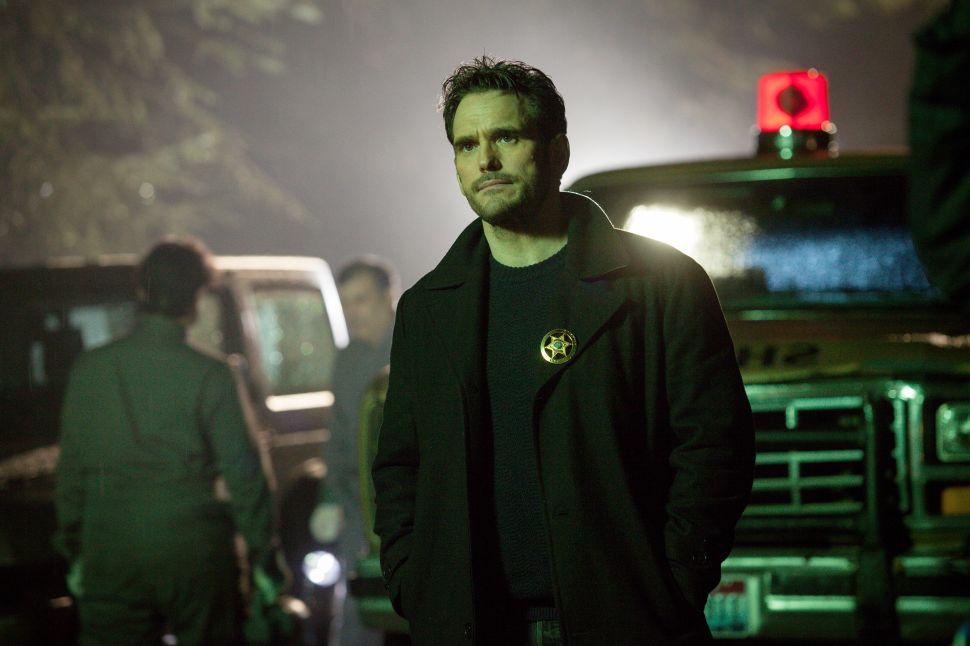