God it’s tough enough still being a virgin technically thousands of years after you’re born, and then you get blown up by a music box bomb right before your first time.

That last sentence, by the way, is Wayward Pines in a nutshell. Like, it technically makes sense but boy is it convoluted.

Poor Ben, though. As Big Bill would say, he ends this episode “crispy like a cracker.” You know, because of the explosions and horrible burning and all that.

How did Ben end up in the back of a truck with Amy before it exploded? Well, the reason they were there is because Amy was particularly inspired by a biology class taught by Mrs. Fisher, the message of which boiled down to “get to boning, children of Wayward Pines.”

The truck exploding is more difficult. So there’s this insurgency of Wayward Pines residents, who graduated from underground group-therapy sessions where everyone had their turn to say “Hi, my name is Kate and I miss dogs and ice cream cones” to building full-on bombs to take down the system. Some of them are more gung-ho than others.

Like Ted, who plants a bomb in Ethan’s car and whooooa Ted. That’s another level of crazy and kind of hasty. Ethan’s been sheriff for, I’m pretty sure, less than 24 hours and Ted is planting a bomb in his truck presumably to kill him but also his wife and child and whoever the fuck is standing near that truck at the time. The last sheriff, that ice cream cone eating bastard, held multiple public executions and everyone just sort of fearfully tolerated it with the exception that some of them gave each other-side eye and kind of mumbled “I don’t know about this.” But no, Ethan has been sheriff for such a small amount of time I don’t even know how anyone knows he’s sheriff, and he needs to get blown up.

But anyway, Ethan discovers the bomb, and also sniffs out the insurgents because they are truly, truly terrible at being inconspicuous. Like when Ethan totally calls out Franklin Dobbs on having explosion and demolition experience and he’s like “I don’t know what you’re talking about but I suddenly really need to leave this restaurant.” And then he goes straight to Kate’s husband Harold to warn him Ethan is on to them, which isn’t a suspicious thing to do in a town full of cameras.

And don’t even get me started on Harold’s attempt to escape from Ethan. One time in college my blacked-out drunk friend Steve tried to run away from four cops and he got about 20 feet further than Harold.

In the middle of all this, Ethan tells both Theresa and Kate the truth about Wayward Pines, and they are simply flabbergasted. Which, I think I have a problem with? Okay, I probably wouldn’t believe it right away. But in the grand scheme of things, is it really that preposterous? Like, both Kate and Theresa are immediately on board with the fact that they’re being kept in a town filled with cameras and microphones, run by a shady, unseen figure, where public throat slittings have occured and can occur again, and a massive, electrified fence keeps them all in. That’s fine. That’s reality. They’re down with that. The world ending? Get out of here with that sci-fi bullshit, say Theresa and Kate.

Anyway, this ends with Kate telling Theresa “You’re a good person…I wish we met under different circumstances.” Which loosely translates to “before I fucked your husband and we were transported to the future.”

But also, Theresa finds some metal in the ground!

Ethan foils the rebels’ first attempt to blow up through the fence with a bomb that, I got to be honest with you here, I don’t think is big enough to get through that fence. But he foils it anyway, and takes Kate into custody and thinks that’s all she wrote. But it isn’t.

With some help from Pam, who has just turned poor Melissa Leo into the most useless of characters, Ethan learns Crazy Ted has another bomb, and he’s driving it out to the fence in his truck. Just the truck, Ted, a bomb, and Ben and Amy about to get started on making some Wayward Pines first generational babies. Get it, Scarecrow.

But before that can happen, Amy just had to pick up the bomb and get it started didn’t she? Explosives, the ultimate cock block. Ethan races after the truck, and the insurgents race into action to stop him by sort of slowly rolling an easily avoided dumpster in front of his car. It works, because of course it does.

Forced to pursue on foot, Ethan is too late to catch up to the truck before it goes kablooey, a word that isn’t used enough in serious television criticism. Ethan is just in time to find Amy and Ben inexplicably outside the truck. Amy is shell-shocked, and Ben sure looks pretty darn dead. Not that I wish death on teenagers, but I wouldn’t hate it if Ben was actually dead. It would add a motivation to this show other than “I don’t understand anything that’s happening.”

But again, poor Ben. Right before he lost his virginity a sudden explosion happened and ruined everything for both participants. Actually, wait. I guess that’s exactly how that usually works. 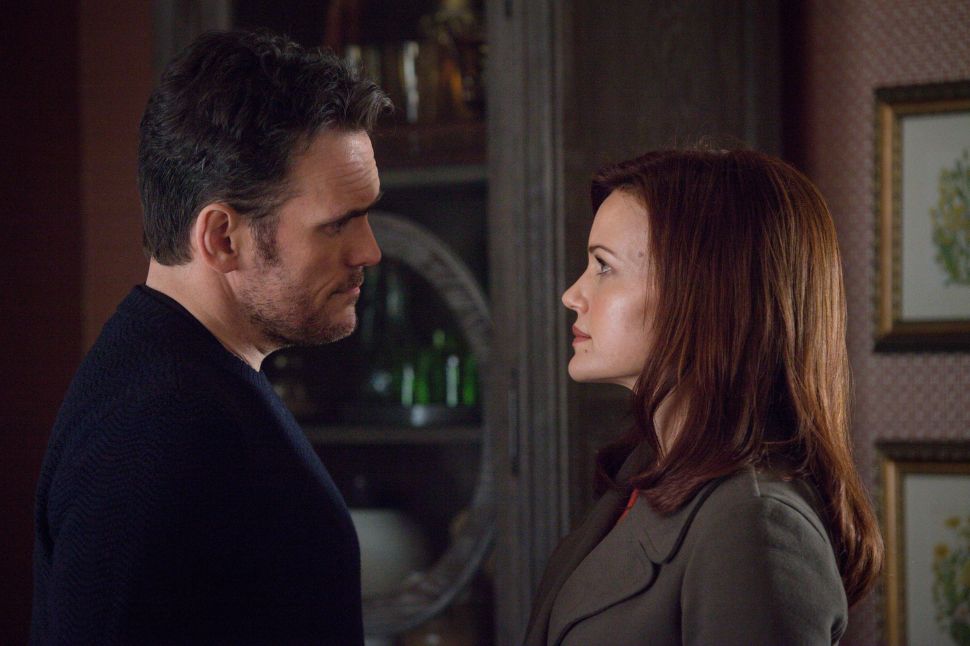