More than 2,000 Jewish athletes are currently competing in the stadium that Hitler built, the stadium that hosted the famed 1936 Olympics in Berlin, the Olympics that turned Jesse Owens into the “fastest man in the world.”

The European Maccabi Games started July 27 and end August 5.  They are a testament to the greatness of Jewish creativity. Holding the Maccabi games, the Jewish Olympics in Berlin, in the heart of Europe, in the midst of increased anti-Semitism, where Israel is often portrayed as a pariah, sends a very strong and loud message, one of pride.

The last European games took place in 2011 in Vienna. Israel, too, also hosts games every four years, they call it the Maccabiah.  Between the two events, in Israel and in Europe, there is a Jewish Olympics competition every two years. Interestingly, only Jews can participate in the games—unless you are an Israeli citizen. If you are an Israeli, no matter if you are Arab, Muslim or a non-Jew, the competition is open to you.

In 1936, when the Olympics were hosted in Berlin under the watchful eye of Adolf Hitler, they were intended to be further proof of the superiority of Aryan science and the perfection of Teutonic, German genes, of eugenics.

For a while, the Americans thought they might boycott the games because they were told that Jews could not qualify and compete. There were press reports of rampant, official, anti-Semitism. President of the US Olympic Committee Avery Brundage sent a committee to investigate. The committee reported back to the larger Olympic Committee that they saw no anti-Semitism in Germany. This was enough to allow Brundage to squash any idea of a boycott of the games.

So the American contingent went to Berlin.

Hitler was present at the opening parade and watched as all the athletes representing their participating nations marched around the track. He watched as the athletes extended their raised arms in the official Olympic salute. As the first country entered the stadium and raised their arms the German crowd in the stadium rose to their feet with a huge roar. The crowd also saluted.

Hitler, too, rose and also saluted. But he misunderstood the Olympic salute. He thought the athletes were saluting him and his Nazi party.

Jesse Owens became the hero of the 1936 Olympics. Owens’ victories in the 100, the 200, the 400 meter dash and the broad jump were a great big slap in the face to Hitler’s concept of racial superiority. The fastest man on earth was not a German— he was a black African American.

A pair of American Jews, Marty Glickman and Sam Stoller, were on the track and field team in Berlin. They never got to run though. US Olympic Committee President Brundage barred the Jews from their event so as not to offend Hitler.

Jesse Owens replaced Glickman, who later became the radio voice of the New York Jets and who died in 2001. Glickman recounted that during the meeting when the announcement was made that he was not to compete, Jesse Owens stood up and said that he already had three medals, that there was no need to replace the Jewish runners.

Brundage replied that he wanted to make certain that the US won the gold. He told Owens that he had no part in the decision making.  And then Owens proceeded to win the event and his fourth gold medal. Interestingly, a few months later the original four teammates—including Glickman and Stoller—and trounced the Olympic time set by the replacement team.

The stadium which hosted the 1936 Olympics, the same stadium that is being used by the European Maccabi Games today, was the centerpiece of many Nazi rallies, especially those rallies held at night with pyrotechnics and theatrical performances. The stadium was a part of the Nazi propaganda, used to sell Nazi ideology.

Even the name of the stadium was important. Hitler named it after his mentor Deitrick Eckart, a racist poet and thinker.

It is deeply moving to know that 79 years after the 1936 games, thousands of young Jewish athletes are proudly celebrating Jewish life in the very spot where Hitler plotted and preached their total annihilation. 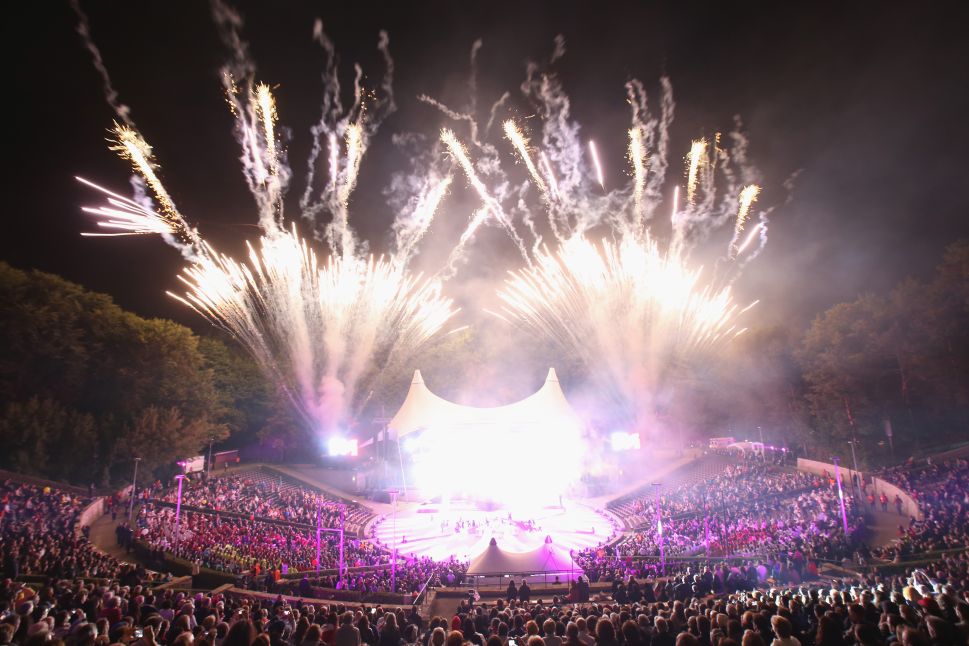