Assuming they have the cash, there’s precious little a Manhattan apartment dweller need do without. Wine cellars, golf simulators, dog spas—if you can dream it, some enterprising developer has probably installed it somewhere.

Harvard Business School grad Emre Okay moved to the city last summer for an internship, renting an apartment at the Biltmore Plaza in Murray Hill. When he returned this summer to take an investment banking job, he decided to re-up at the same place—in no small part because of the youthful scene he’d found there the first time around.

“Every day you’re in the elevator with other young people, and so you meet people,” he told the Observer. “You meet guys who went to good schools who got good jobs. It’s great in terms of building a network.”

Also, he added, “It’s a great building for meeting some beautiful women. So that definitely played a factor.”

“There was someone who stayed [in the building] for a few weeks,” Mr. Okay said. “I hung out with her for a few weeks [last summer] while she was here. We met in the elevator.”

Steven Tyler would be proud.

Each summer, hordes of freshly minted grads descend on Manhattan looking for places to live. And just as the city’s literati love brownstone Brooklyn and its foreign billionaires tend to flock along 57th Street, the post-college crowd has certain preferred habitats of its own.

Many buildings have stopped allowing the installation of full floor-to-ceiling walls, thereby complicating the sharing situation.

Generally speaking, the recent grad market is looking for a combination of reasonable rents and good amenities, said Citi Habitats broker Rory Bolger. In practice, that means lower-priced doorman buildings with largish one-bedrooms that can be converted to two-bedrooms or, in the case of the especially impecunious, threes.

Which raises the all-important question regarding a rental building’s recent grad potential: Can you build a wall?

Once upon a time, divvying up an apartment was a fairly straightforward affair, Mr. Bolger recalled. “You came to the city, you moved to one of these buildings, and you put up a wall.”

In recent years, though, in response to (depending on who you ask) either a real or perceived crackdown by the Department of Buildings, many buildings have stopped allowing the installation of full floor-to-ceiling walls, thereby complicating the sharing situation.

In some cases, this leads to games of cat-and-mouse, noted Mirador agent Andrew Rose, citing the case of an acquaintance who had built a wall in his Stuyvesant Town rental.

“Someone from [the development] showed up on his doorstep and left a note telling him that his apartment was going to be inspected next week and that if he had done anything contrary to his lease he would be kicked out,” he said. “So he took down the wall, and then it was inspected, and then he put it back up again.”

More commonly, the crackdown has forced recent grads to divide their pads with “bookshelf” style walls that don’t fully extend to the ceiling, or door-less “walk-about” walls (likened by Mr. Bolger to the entrance to an airport bathroom).

Or, Mr. Rose said, it’s meant that “for all intents and purposes, one person lives in the living room. Which,” he added, “recent grads are fine with, because they’re only making $40,000 a year.”

Buildings that are wall-friendly, meanwhile, can expect a steady flow of post-collegiate customers, said Citi Habitats agent Tammy Hsu. And some, she noted, go out of their way to take advantage of this fact.

“For instance, there’s a landlord, Manhattan Skyline, that owns buildings like the Habitat (154 East 29th Street) and the Murray Hill (115 East 34th Street),” she said. “And they actually give you a flyer when you walk in on what kind of temporary walls they allow.”

But when you capture the recent grad market, what, really, have you won? Extra wear and tear on your apartments? Overstuffed elevators from all the shares? Why, in other words, would a landlord want this demographic in the first place?

Additionally, the company hopes young grads will rent within its portfolio as they get older and, presumably, a bit wealthier. “We’re very happy to have people grow with us,” she said.

It also lets a building squeeze a bit more rent out of its units, Ms. Hsu suggested.

“I think it’s hard for a single person or couple to justify spending $4,200 on a one-bedroom, but you can charge $4,200 for a one-bedroom if two people [share] it like a two-bedroom,” she said.

The Financial District has also emerged as a popular option of late, with buildings like 2 Gold, 45 Wall and 100 Maiden Lane carving out a niche with recent grads, noted Warburg broker Gabe Leibowitz.

“The majority of the apartments [in FiDi] allow for some sort of sharing or conversion, and when you are talking about the luxury market the prices down here are much more feasible, so you get a little more bang for your buck,” said Platinum Properties rental manager Daniel Itingen.

Then there are those who’d prefer to steer clear of the traditional spots.

Upon moving back to the city after college, Justin Forman, who grew up on the Upper West Side and currently rents at Manhattan Skyline’s SoHo Court, had three non-negotiables for his apartment. No. 1 was proximity to the subway; No. 2 was an elevator; and No. 3, he said, “was not to live in Murray Hill.”

“More and more clients are discovering that they can actually move to a place like Soho or Tribeca or the West Village and live in a place that’s a little bit smaller, a little bit older, for the same price as those larger doorman, elevator, amenity-type [buildings] in Murray Hill,” said Blair Brandt, CEO of Next Step Realty, which focuses specifically on the recent grad market.

Dartmouth grad and Next Step client Rex Woodbury, for instance, opted for a West Village walk-up. “I looked at one or two [big doorman buildings],” he said, “but I really kind of fell in love with the West Village and the walkup. When I thought about moving to New York, that’s what I thought of. It just has that good character.”

Mr. Woodbury’s new place will likely have a collegiate vibe all the same. His two roommates are both recent Princeton grads, and three friends from Dartmouth live on the floor above.

Back in Murray Hill, meanwhile, Mr. Okay is gearing up for his building’s full experience. Last summer, he said, he didn’t pay for access to amenities like the pool, gym and roof deck.

A word of pessimism from Mr. Rose regarding that latter feature, though.

“People do absolutely love a roof deck,” he said. “I don’t think I do a single [recent grad] appointment without someone asking if [there is] a roof deck.

“But nobody [actually] uses those things. They’re wastelands.” 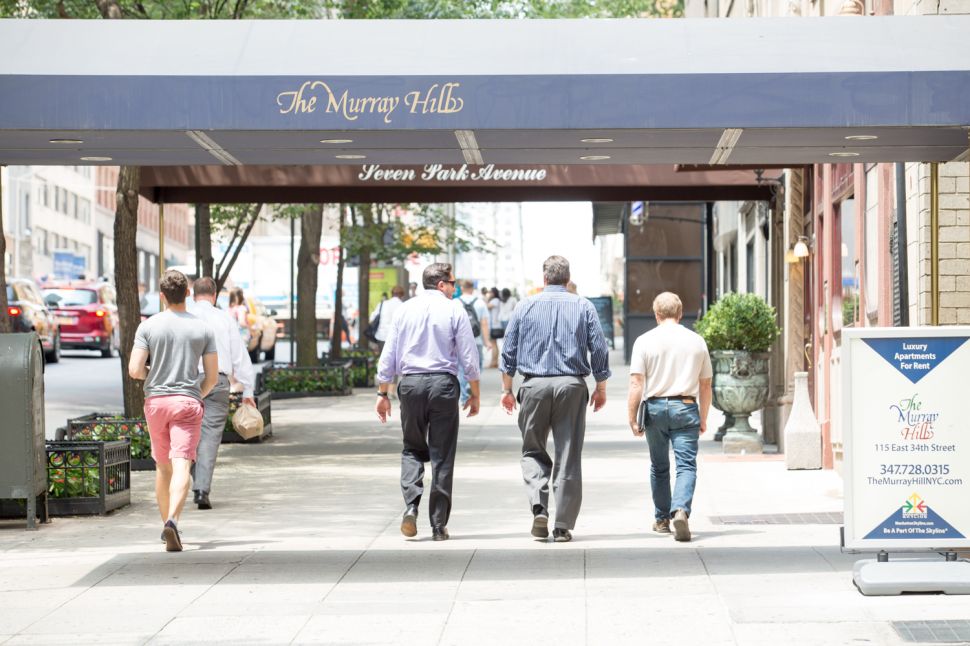