The cutting television ads. The coalition-building. The incessant lobbying.

It was a textbook 21st century campaign.

And Mayor Bill de Blasio, long the maestro of messaging, was at the wrong end of it. The “tale of two cities” Democrat met Uber, the e-hail giant which forced the mayor last week to back away from a plan to cap the startling growth of their fleet. Uber tapped into a burgeoning coalition–tech-loving millenials and minorities who hate yellow cabs–that could haunt him through his re-election.

Allies and critics of the mayor also say he appeared uncharacteristically unprepared for a public relations clash with Uber, and failed to emphasize some unflattering truths about the tech behemoth. For all their money and lobbying power, it was Uber’s ability to make the fight about an upstart company ferrying black and brown people in the outer boroughs get around town that helped win the day–and turned plenty of big-name Democrats against Mr. de Blasio.

At the minimum, there were two words that should have always been on Mr. de Blasio’s lips, politicos say: surge pricing.

“With Uber, why weren’t they working on a bigger campaign weeks if not months ago? They had to have anticipated Uber would pull out all the stops. Where was the Campaign for One New York, where was [Mr. de Blasio’s campaign consultant] BerlinRosen?” asked a left-leaning Democratic consultant. (BerlinRosen also serves as a consultant for Uber competitor Lyft.)

“A lot could have been done to attack on the issue of surge pricing,” the consultant added. “That’s the number one complaint for a lot of people. Why not have Campaign for One New York throw down money, do polling, roll out a bigger campaign? ‘Uber drives away with your money.'”

Mr. de Blasio may have kept his biggest gun in the holster. The Campaign for One New York, a nonprofit created to promote Mr. de Blasio’s agenda, never launched a counter-offensive to Uber, which employed several of the nation’s top strategists, including David Plouffe, President Obama’s former campaign manager. Mr. de Blasio’s nonprofit can accept far larger individual contributions than his campaign account and has been used to promote his initiatives in the past, including the the expansion of universal prekindergarten.

How effective a Campaign for One New York-backed PR barrage against Uber would have been, given the company’s own deft strategy, is not clear. What a more revved up anti-Uber campaign could have done, liberals say, is highlight Uber’s practice of rapidly hiking fares–1.7 times the normal rate–when their cars are in demand, whether there’s a weather emergency or just a sudden collective need to go crosstown.

Instead, the de Blasio administration seemed to cycle among various criticisms that failed to resonate with the broader public. While City Hall made cogent arguments for Uber’s cars contributing to Manhattan’s congestion, and originally articulated this as the reason for an immediate cap on Uber’s growth, surge pricing was rarely mentioned when Mr. de Blasio eventually broadened his attacks on Uber to portray it as another greedy corporation trying to flout the rules of government.

Uber owned the inequality debate, slapping around Mr. de Blasio as a career politician beholden to the yellow taxi cartel. Any action he took could be viewed as a cynical repayment of their campaign cash. It didn’t help that Mr. de Blasio was a past opponent of congestion pricing and outer borough green cabs.

Loudly criticizing surge pricing, a rhetorical move that would have been well in line with Mr. de Blasio’s left-of-center weltanschauung, never happened.

“His messaging doesn’t match what people really care about, even when he’s right on the issue,” lamented a city Democrat aligned with Mr. de Blasio.

A City Hall spokesman insisted Mr. de Blasio had always been clear about his concerns regarding surge pricing.

“It’s worth noting that the City of New York highlighted the issue of surge pricing transparency early on, and for the first time passengers will soon be seeing surges reflected in actual dollars and cents before they enter a car,” said the spokesman, Wiley Norvell. “Surge pricing has been, and continues to be, among the host of serious policy issues we’ve raised with respect to this growing sector.”

The outcome of Mr. de Blasio’s battle with Uber was a compromise that the two sides had sought earlier: a bill to cap their growth at 1 percent was tabled, and in turn a four-month traffic study will be conducted to determine how much the for-hire industry contributes to congestion. In a small victory for City Hall, Uber will share additional data about the trips it makes.

For Uber, which has tussled with regulators in Europe and California, the fallout was a warning to mayors across America: if we can force the mayor of New York City to back down, we can do it to you too.

The blitzkrieg strategy worked. Even the mayor of the largest city in America, a former top campaign operative to boot, could not prevail–at least in the short term. Given more time (a traffic study will be completed in November), allies are betting Mr. de Blasio can cook up a more effective counter-attack. “This was never about paying back the taxi donors. This was about hitting pause to figure shit out,” said a strategist with ties to City Hall.

Unlike the charter school lobby, which bludgeons the mayor chiefly through the alliances it has made in Albany, Uber can turn to Democrats in New York City who don’t want to face the wrath of a Silicon Valley darling. Few politicians dare to seem like they’re opposing a shining symbol of ingenuity, no matter what form it takes.

A prominent liberal activist and ally of Mr. de Blasio suggested City Hall was too grounded, at least initially, in the congestion argument. Winning a public relations fight against Uber, or at least passing regulatory legislation, will take a new approach.

“I do think it was genuinely about traffic when this thing started,” the activist said. “The fight needs to broaden out … we have to bring in the issues of worker rights, part-time work, misclassification of workers. We have to bring in surge pricing.”

Not everyone is convinced this will make any difference. Mike Morey, a Democratic consultant who worked for one of Mr. de Blasio’s rivals in the 2013 mayoral race, said it was always ill-advised to pick a fight with Uber, and the liberal mayor should just look elsewhere.

“If I were them, I’d back away,” Mr. Morey said. “I just don’t see a winning argument here, both on the consumer side and the political battle itself.” 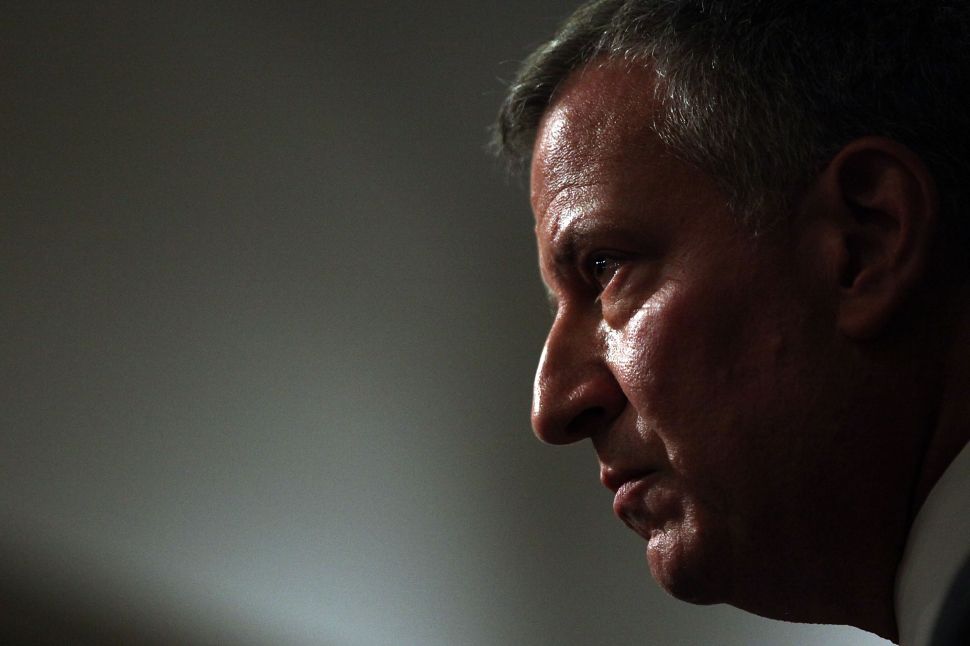