Ta-Nehisi Coates is the single best writer on the subject of race in the United States. This is what it says on the cover of his new book, Between the World and Me. It’s actually a quote from The New York Observer.

I would take it a step further and say that he’s one of America’s best writers and journalists, period. I’m a big fan.

But before we get there, I suppose I should declare my various biases. First off, it was a book I have eagerly anticipated for some time–if only selfishly because this book has taken him away from the prodigious amounts of daily output that his fans have come to cherish over the years. The other bias is that my father was a police officer. First as a hate crimes detective and later the robbery division, and also as the head of Explosive Ordnance Disposal. Also I am white (though puzzlingly tan) and a writer myself.

In other words, I bring some baggage to the table. But I also desperately wanted to love this book.

Someone needs to articulate and detangle the pernicious myths and bad history that has long held our country back from dealing with, understanding and moving forward when it comes to the issue of race. It’s in literature that unique human experiences can be shared and communicated–and what it feels like to be black in America is a powerful and important reflection on this nation as a whole. In a world of television pundits and pageview hungry bloggers, it is rare to see someone as big picture and historical and thoughtful as Coates. It’s even rarer still to see them reach such a massive online audience without pandering, and without exploiting politics to get traffic.

I am humbled at the way that Coates makes you think, makes you question your assumptions, and makes you see the inhumanity and disgrace of many of this country’s laws and politics. There are moments in this book that accomplish that.

The problem with the rest of it is that it often feels like it was written by a writer who has fallen in love with their own voice (something that can increasingly be said about his blog as well). This is apparent from the very beginning of the galley copy which contains a letter from Chris Jackson, the book’s editor. It says that the book was originally supposed to be a book of essays about the Civil War (which I do hope Coates also writes) but instead changed after Coates re-read James Baldwin. He writes “[Coates] called after his reading and asked me why people don’t write books like that anymore–books that combine beautiful story-telling, intellectual rigor, powerful polemic, and prophetic urgency.”

This is dangerous territory for a writer–when they’re motivated to emulate someone else, particularly a style from a different generation (a unique and peerless one I would add to that). It’s dangerous for an editor to encourage it too and to set such expectations for advanced readers is in poor judgement. As a fellow author put it to me recently, “emulating Baldwin is death.”

The result is that this book seems to rarely come out and say anything. Or at least, say directly what it means. The opening scene is Coates writing about an appearance on cable television where he discussed race, fear and safety with the host. But instead of coming out and saying that, he writes “Last Sunday the host of a popular news show asked me what it meant to lose my body. The host was broadcasting from Washington, D.C., and I was seated in a remote studio on the far side of Manhattan. There was a one word snaking into my ear and another dangling down my shirt. The satellite…” I’ll cut it there but it goes on like this for some time.

My point is, what Coates is talking about is urgent and important. But it’s almost as if he doesn’t want to get to it. He can’t be direct. He has to refer to Howard University as “The Mecca” throughout the book, he has to use a million other euphemisms and overwrought phrases, but why? It doesn’t make his point clearer. On the contrary, if you’re not searching for it, you might miss it. In fact, it often feels like he missed it—or at least lost track of it.

Some of the other reviewers have focused on his controversial reaction to 9/11 and the deaths of many police officers on that day. Despite my bias, I appreciated this. Because it was real. It was authentic. It was a powerful revelation and powerful personal point (which is all it was intended to be). It makes you think–what if my close friend had been brutally executed by the police, how would that change my perspective?—EVEN if you ultimately push back on it

Elsewhere, I tried to imagine someone currently not convinced of Coates’ genius or the significance of his message. Sadly, I could not see them making it more than a few chapters before closing it and moving on to someone else. Someone less talented, less insightful, but at least more straightforward. No one would make that argument about his past writing, which is almost always cogent and clear and definitive.

The response here will be that this book wasn’t written for me, or someone like me. The book was written as a letter to Coates’ son, so of course, some of this is to be expected. But certainly, no father would ever actually speak this way. Not without their kid rolling their eyes anyway.

The irony is that there is a section in the book where Coates discusses what he learned from poetry. He writes “I was learning the craft of poetry, which is to say I was learning the craft of thinking. Poetry aims for economy of truth–loose and useless words must be discarded, and I found that these loose and useless words were not separate from loose and useless thoughts.” The reality is that this is a very short book that somehow manages to violate that dictum. It certainly waxes poetic at times, far too indulgently.

A writer’s job, as Fitzgerald once said about ‘genius’, is “to put into effect what is in your mind.” An editor’s job is to help a writer sort through their own experience and lens of seeing so that the vision best reaches the audience. The audience’s job is take the step forward to the material and be prepared to receive and interact with it. Somewhere in the rush to publication (which was moved up in light of recent news events) these parties have not fully met.

The book exists in some kind of thick bubble.

Which is really unfortunate because as events have shown recently, America is its own impenetrable bubble.

There’s that line from Kafka about how a book should be an axe that breaks the frozen sea within us.

This could have been this book. Coates has been that writer for me, personally. His guided journey through the Civil War, through segregation and race relations and so many other topics, have been that for thousands of other people.

Between the World and Me is a book with many gems in it but it forces the reader to search for him. And thus it fails to fully break through as one would hope. 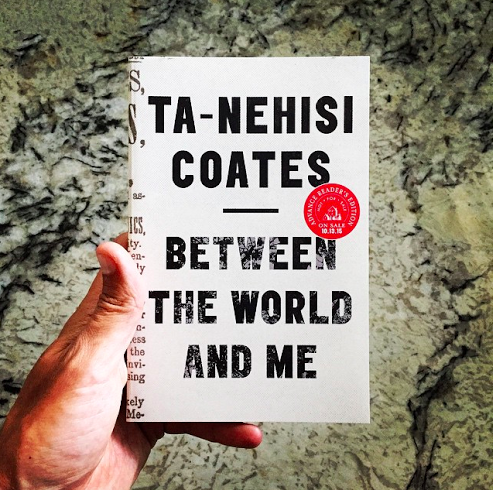