Many years ago, when my daughter’s playmate was dropped off at our home, her prim mother would whisper to her, “Now mind your manners, darling.”

Today, “minding manners” is a foreign concept to many children. Etiquette and respect have gone out with bell-bottoms, but unlike those groovy jeans, it never made a comeback. Kids’ manners are arguably worse than ever.

“Kids are rude because they’re modeling rude behavior that they see around them,” says April Masini, relationship expert with the AskApril.com advice site. “From parents to teachers to rappers to movie stars—kids learn from what they see, so if your kids are exposed to rude behavior, they’re going to model it.”

According to Alex J. Packer, Ph.D., author of the book How Rude! The Teen Guide to Good Manners, Proper Behavior, and Not Grossing People Out , good manners must be taught, discussed, and practiced. Yet manners are no longer stressed in many homes and schools. “A lot of parents would rather be their child’s friend than their parent,” he says. “So kids get mixed messages and etiquette instruction falls by the wayside.” In a survey Mr. Packer conducted with parents for his book, he asked: “Do you think children today are more polite, less polite, or the same as when you were growing up?” Of the 70 parents that responded, three-quarters answered that today’s children and adults are less polite than when they, themselves, were growing up.

Is Our Lack Of Manners Partly A Result Of New Technology?

“I wouldn’t say it’s necessarily the instant gratification that’s the culprit,” says Mr. Packer. “It’s the nature of what the technology demands or allows one to do. Texting and tweeting encourage brief communications, which can lead to a lack of clarity, nuance, and sensitivity, in other words, bad manners.  Relating through electronic devices creates a breeding ground for rudeness since it’s easier to be rude anonymously or remotely; you get less practice for ‘real’ relationships; and, for most people, brief written communications are more likely than face-to-face interactions to lead to rude, insensitive, or misinterpreted remarks. In the same way that the automobile introduced a myriad of new opportunities for rudeness, so do today’s new electronic devices, social media, and communication methods.”

Darlene Sweetland, Ph.D. and Ron Stolberg, Ph.D., clinical psychologists and authors of Teaching Kids to Think: Raising Confident, Independent, and Thoughtful Children in an Age of Instant Gratification fret that kids in this generation are technology focused. “Their faces are in their phones, not attending to those around them. “In past generations, eyes were up observing the social interactions around them all day long,” says Ms. Sweetland. “Now, their eyes are on their electronic devices, missing all of those opportunities to learn manners and social skills. You can’t use manners when you aren’t attentive to others. In addition, parents are modeling it for their kids. How many times do you see parents on their phones any time there is a minute of waiting?”

A 2014 study by the Boston Medical Center, published in the journal Pediatrics, found that 75 percent of families observed at fast food restaurants checked their smart phones during the meal. About one-third of parents were on their smart phones the entire meal.

“As far as digital manners go, the apple doesn’t fall far from the tree,” says David Ryan Polgar, cofounder of the Digital Citizenship Summit, and a frequent commentator about tech etiquette.  “While it is easy to spot a child glued to their device, oblivious to the world around them, it should be noted that poor digital manners are a cross-generational issue. There are countless adults displaying rude behavior while being engulfed in devices.”

Mr. Polgar adds that he is more concerned with parents not modeling proper behavior in front of their kids. “This starts with the classic example of parents ignoring their children during meals while being on their devices, which sends a negative signal and sets a poor standard for expected tech etiquette. Similar to the famous anti-drug commercial of the late 80s, a child can explain their rude tech behavior by saying, ‘I learned it by watching you, Dad!’ Parents who poorly use tech may be raising children who poorly use tech. No wonder everyone is so rude.”

Mr. Polgar believes the pendulum will swing the other way as we establish what is and what isn’t appropriate tech behavior. “There is a movement afoot to teach digital citizenship skills, which includes tech etiquette as a major component.”

In a survey conducted by psychologist Alex J. Packer, parents revealed the most important manners they would like their children to practice:

4. Clean up after themselves.

7. Give people a firm handshake.

8. Have compassion toward others.

9. Respond when spoken to. 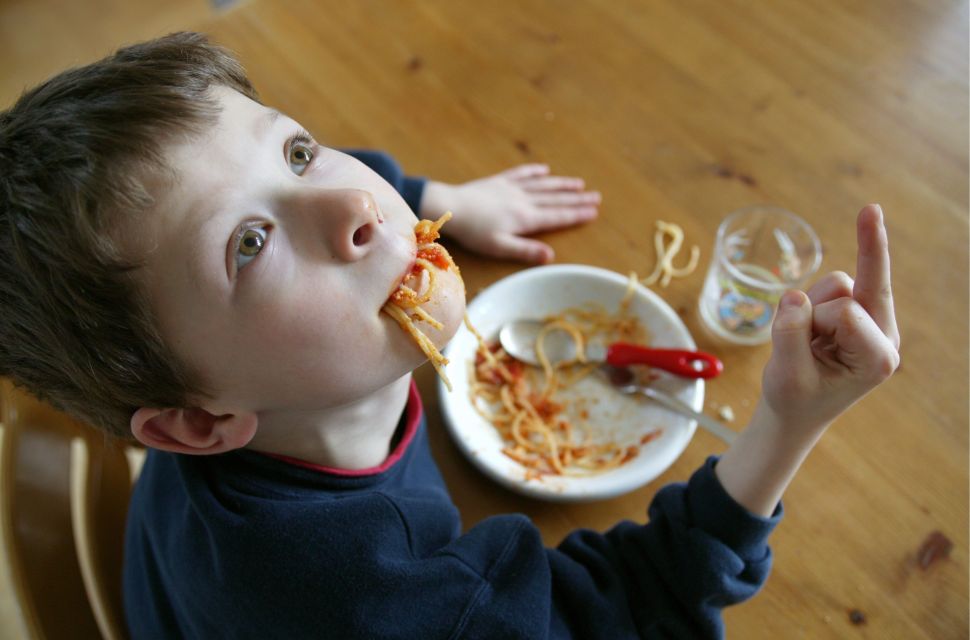