A new installation by Ian Gerson at the alternative art space Tomato House is submerging visitors inside a room-size spaceship/submarine. But the show is also taking visitors beyond Brooklyn’s established art districts—to Brownsville, just past the western limit of Crown Heights.

The installation work looks like a spaceship that’s managed to insert itself inside the building. Visitors can enter, check out what it looks like inside and check out its unique elements, such as a hole in the floor filled with and found objects. Are you looking at the supply or down into the ocean?

“It’s like an experimental vessel for underwater or outer space,” the artist told the Observer, saying that suggesting both the ocean and the sky together in one piece was meant to direct visitors to contemplate these vast unknowns.

The work is made from some of his usual materials, the artist said: wood, cardboard and found objects. Black lights enhance the otherworldly quality.

Ms. Bird said that as gallerists she and Mr. Thurber look for experimental, fun work that doesn’t require a lot of explanation.

“We like things that are accessible on a really direct level,” Ms. Bird said. They also like to do shows featuring the work of a single artist, though it’s not always a single giant piece, like “Future Floor.”

She and Mr. Thurber purchased the Brownsville building about five years ago and set up the storefront as her art studio. When they left the doors open as she worked sometimes, they found that people came inside. So they thought they might as well turn it into an occasional exhibition space.

“We have an audience of artists we know and also an audience of kids who live on the street,” she said. They had previously run small shows together in an apartment they shared, so this wasn’t their first rodeo.

Of course, frontier art exhibitions don’t always mesh well with neighbors. Empty No More learned that when it turned an empty court house into a temporary art space. That said, there are some key differences between that one-off show and this ongoing space. Ms. Bird and Mr. Thurber aren’t only visiting. They’ve moved in.

“Tomato House is perhaps the most elaborate of a series of collaborative projects we have undertaken together over the course of 17 years,” Ms. Bird said. While she doesn’t know of other similar spaces in Crown Heights or Brownsville, she says others are coming closer, to the north, along Broadway Avenue.

‘Future Floor’ is Tomato House’s second show so far in 2015. 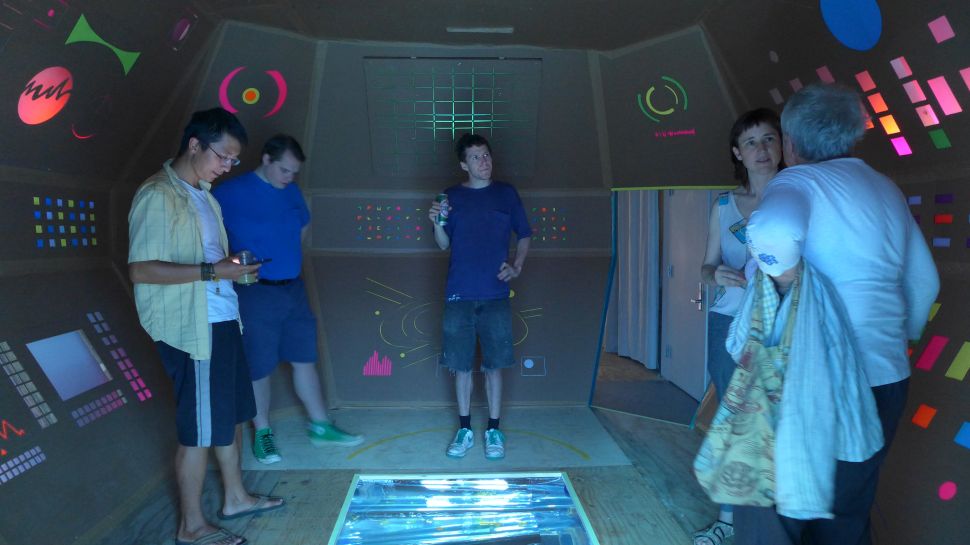