At an obvious crossroads in his life, Woody Allen has been thinking about guilt, morality, consciousness and the limitations of the intellect. I wish he had done it in a more entertaining and satisfying film than Irrational Man. Coolly received in May when it made its debut in Cannes, this odd, absurdist discourse on the subject of cockeyed philosophy offers, among other things, surface opinions about impotence, the illogic of ethics, the never-ending war in Iraq, and Mr. Allen’s own never-ending depression. Its commercial outcome looks cloudy. But this is Woody Allen. His box-office predictions are always dubious, and the profits often turn out as surprising as hailstorms in July. Lately we’ve had some of those too. You never can tell.

The star is Joaquin Phoenix, a quirky actor who proves again and again that he cannot carry any movie by himself, especially one that casts him as a sullen, morose and drunken college professor with years of alleged maturity and experience. All he really has is a sordid background as a journalist whose mother committed suicide when he was 12 by drinking bleach. He’s also an author with crippling writer’s block who once wrote a book that inspired pseudo-intellectual students to embrace the absolute meaninglessness of life. He hasn’t written a word since. Arriving at a new job in Newport, R.I., his mumbling, detached boredom turns on at least one oversexed faculty wife (Parker Posey) and one fresh, impressionable student (Emma Stone), who is drawn to his pain and anguish with a romantic fantasy of fixing his angst. He’s also impotent. She’s determined to be a replacement for Cialis.

To make a short story even shorter, he overhears a conversation in a diner about a distraught mother whose kids are being taken from her by a bad judge who rules her incompetent. Using the power of philosophy, he solves the problem by committing the perfect crime. Literally getting away with murder, his zest for life returns, his writing flows, and he’s having affairs with two women at the same time. It’s amazing how liberating a crime against humanity can be. Ironically, the two women who brought him out of his lethargy eventually orchestrate his downfall. Now there’s only one key to his survival. He has to kill again. That is not a spoiler. The tables are just about to turn—in more ways than one.

The homicidal comedy elements are not in the same league as Manhattan Murder Mystery, Emma Stone is no Diane Keaton (although she manages a few fizzy moments), and Parker Posey as a campus cougar is a casting joke that backfires. In the doofus incarnation Mr. Allen usually plays himself, Joaquin Phoenix is a lost cause as hopeless as shipping frozen popsicles to Afghanistan. Never comfortable in comedy shoes, he fails to capture Mr. Allen’s whimsical style with the loopy finesse Owen Wilson found in Midnight in Paris, and you won’t find any chemistry or sexual rapport between him and Emma Stone with a microscope.

In Woody Allen’s 45th film, he poses the question: Can a murder that makes the world a better place really be considered a crime if nobody catches you? Not exactly a write-off, but nothing memorable, either, Irrational Man is a sardonic exercise in cynicism that will most likely appeal to the same pretentious art-house eggheads it’s making fun of. One review I read is already comparing it to Dostoyevsky. 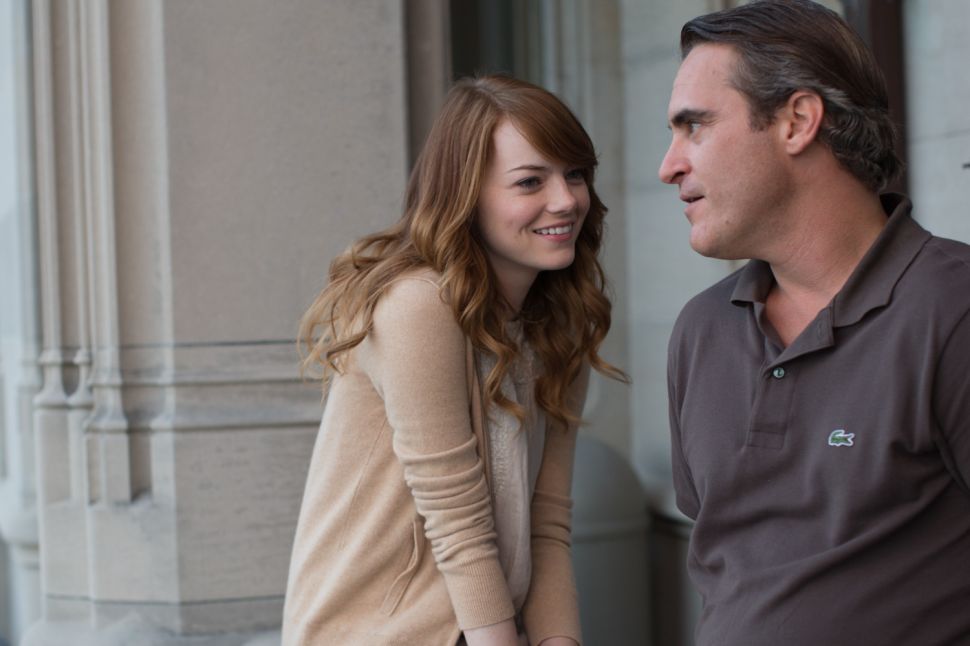