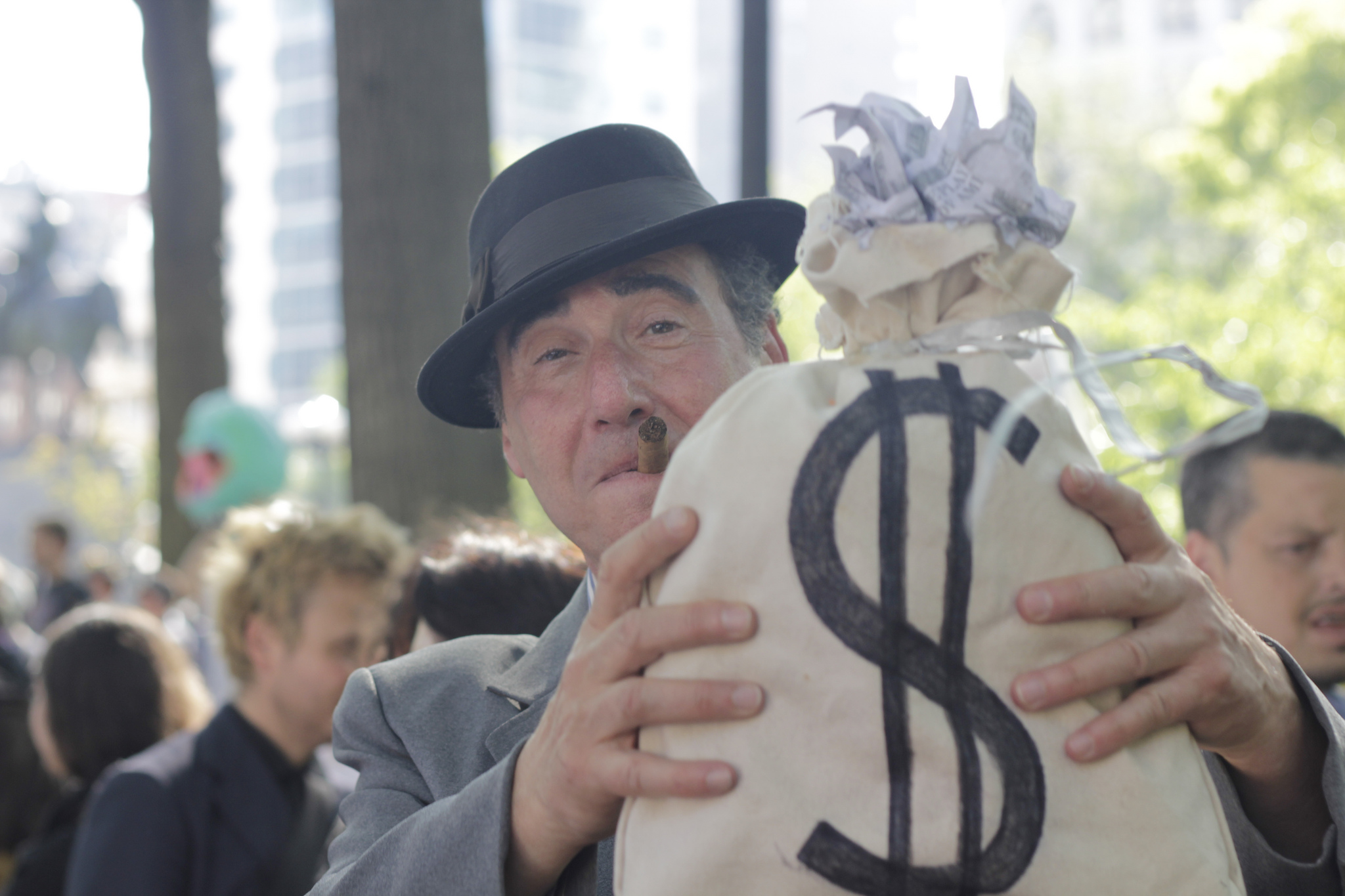 What do millionaires do differently?

Are they harder workers? Do they have brains that can bend spoons? Do they exhibit Bond Villain levels of cunning?

Eighty percent were self-made, accruing all their wealth in one generation. And they were doing a number of things you and I probably aren’t.

Here are a few patterns the researchers saw:

1) Most Millionaires Are Self-Employed

Got a great idea for a business? Make sure the profits are going in your pocket, not your boss’s.

Twenty percent of the affluent households in America are headed by retirees. Of the remaining 80 percent, more than two-thirds are headed by self-employed owners of businesses. In America, fewer than one in five households, or about 18 percent, is headed by a self-employed business owner or professional. But these self-employed people are four times more likely to be millionaires than those who work for others.

Sound risky? It is. Less than a third of new companies survive 10 years.

…no matter how you measure new firms, and no matter which developed country you look at, it appears that only half of new firms started remain in business for five years, and less than one-third last 10 years.

But millionaires have a different perspective. They think it’s risky to work for someone else. You could get laid off. Your boss could make a bad decision.

They want to be in control of their own destiny and yes—they’re quite confident. And research shows confidence boosts your income.

But not only is entrepreneurship risky, it’s also hard work.

In only two countries out of all the ones surveyed did the self-employed not work harder than salaried employees: 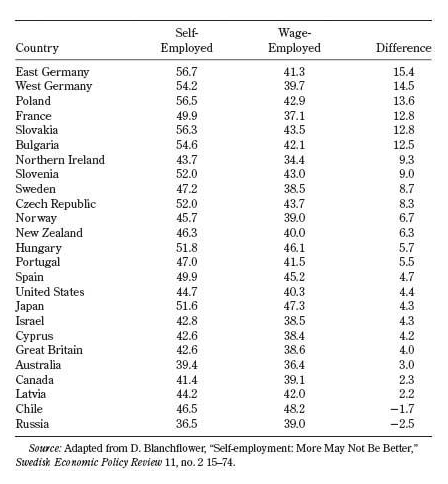 Why do something so risky and difficult? Research shows one of the main things that makes us love our work is autonomy.

And this is definitely true here. You’d need to earn 2.5 times as much money to be as happy as someone who is self-employed.

(For more on what the most successful people have in common, click here.)

So these aren’t salaried employees. But how do they decide what kind of companies to start?

They don’t start a business they’re necessarily passionate about. They don’t even do something they necessarily understand or have experience in.

They start a business that they think is going to make money. They look for areas of big demand and small supply.

Some of you are saying, “Duh. Of course that’s how you should pick a business.” Yeah, but that’s not what the vast majority of people do.

…there is no evidence that entrepreneurs select industries in which profits, profit margins, or revenues are higher.

63% of new business owners admit their venture doesn’t have a competitive advantage. Only a third say they really did a search for good business ideas.

And the industry you start a business in is very important: some industries are over 600 times more likely to be successful than others.

One of the authors of The Millionaire Mind is a business school professor. Every year he asks his students what the most profitable businesses are.

And every year the students can’t even name one correct answer. If smart, educated business students don’t know, why would the average person?

But millionaires pride themselves on thinking differently and looking for underserved markets and hidden opportunities.

And, frankly, the companies they start usually aren’t sexy. They fall into the category of “dull-normal.” But they make bank.

Many of the types of businesses we are in could be classified as dull-normal. We are welding contractors, auctioneers, rice farmers, owners of mobile-home parks, pest controllers, coin and stamp dealers, and paving contractors.

Despite thinking differently and doing things their own way, they’re not jerks. Ninety-four percent of millionaires said “getting along with people” was key.

(For more on how not following your passion can be the smartest career strategy, click here.)

So they run their own shop and choose wisely what type of business to be in. But to make it a success don’t they have to be brilliant? Nope.

We’ve all heard the old saying, “If you’re so smart, why aren’t you rich?” What was the average college GPA of an American millionaire?

(Not a lot of Phi Beta Kappa keys jangling around here, folks.)

Few were ever called intellectually gifted and many were explicitly told they didn’t have what it takes for medical school, law school or MBA school.

But what most people don’t know is that GPA is a very poor predictor of success.

Via The Millionaire Mind:

I find no substantial statistical correlation between the economic-productivity factors (net worth and income) and SATs, class rank in college, and grade performance in college…

And this may be part of the reason they’re so successful as entrepreneurs: “smarter” people are less likely to take such risks.

Via The Millionaire Mind:

Overall, there is an inverse relationship between taking financial risk and various measures of analytical intelligence such as SAT scores.

And maybe this is why former drug dealers are more likely to start businesses.

…people who dealt drugs as teenagers are between 11 and 21 percent more likely than other people to start their own businesses in adulthood. And their higher rate of self-employment isn’t the result of wealth accumulated dealing drugs, greater likelihood of having a criminal record, or lower wages.

In entrepreneurship, you’re the boss. So it requires leadership. And some research shows being super-smart actually makes you worse at being a leader.

Via Mind in Context: Interactionist Perspectives on Human Intelligence:

(Though research shows if you want to be a successful terrorist, definitely study hard in school.)

But future millionaires do work hard. When asked what their teachers did compliment them on, what was the most common response?

When asked what they did learn in college, 94 percent replied “a strong work ethic.” And research shows self-discipline trumps IQ when it comes to success.

So we know how they bring their money in. Is there another part to the equation? Yeah. Don’t let that money out.

When the authors of The Millionaire Mind interviewed the wealthy, they didn’t want them to feel uncomfortable.

So they rented a penthouse in Manhattan, loaded it with four types of pâté, three kinds of caviar and plenty of fine wine.

The millionaires arrived… and felt completely out of place. All they ate were the gourmet crackers.

When offered the fancy wine one interviewee said he only drank two types of beer: free and Budweiser.

The researchers were stunned. They quickly realized the media images we see of millionaires aren’t representative.

Expect a millionaire to be a fancy dresser? Fifty percent have never paid over $399 for a suit. (Ten percent had never paid $195.)

In fact, if you do see someone wearing a $1,000 suit, it’s more likely they’re not a millionaire.

Fancy car? More than half have never paid over $30,000 for a car. See someone in a Mercedes? They are probably not a millionaire.

…approximately 70,000 Mercedes were sold in this country last year. This translates into about one-half of 1 percent of the more than fourteen million motor vehicles sold. At the same time, there were nearly 3.5 million millionaire households. What does this tell us? It suggests that the members of most wealthy households don’t drive luxury imports. The fact is that two out of three purchasers or leasers of foreign luxury motor vehicles in this country are not millionaires.

Most millionaires live a lot more like you and me than Jay Z, Elon Musk or Donald Trump.

They’re thrifty, not very materialistic, and they think a great deal about how much they spend.

And the more materialistic people are, the less satisfied they are with their lives.

Via 100 Simple Secrets of the Best Half of Life:

Among participants in one study, those whose values were the most materialistic rated their lives as the least satisfying.—Ryan and Dziurawiec 2001

Research shows people are better with their money when they think long term. Experts say you should have a system.

Are you as money-conscious as a millionaire? Most millionaires answer “yes” to these four questions. Can you?

(For more on research-backed ways to spend your money so it increases your happiness, click here.)

So it’s clear how millionaires make their money. But what should we take away from all of this?

Being a millionaire must be nice. But we won’t all get there. And that’s okay. Money isn’t everything.

So even if you don’t get rich, what lessons can we all learn from millionaires?

That’s advice anyone can follow and everyone can benefit from.

Join over 205,000 readers. Get a free weekly update via email here.

How To Make Your Life Better By Sending Five Simple Emails 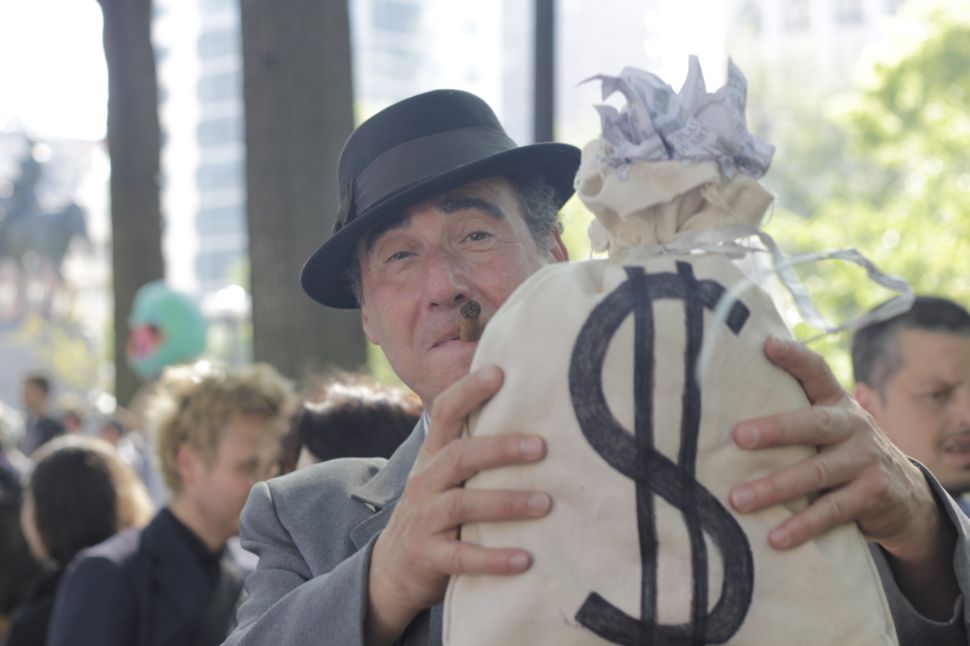