In two appearances in recent days, in Washington State and Oregon, Bernie Sanders drew massive crowds of supporters that were larger—for these two speeches alone—-than the combined crowds of every Republican and Democrat running for president added together over the entire weekend.

First, on Saturday night, a spectacular crowd of 15,000 people turned out for a Sanders rally at the Alaska Airlines Arena in Seattle. And then, on Sunday, Sanders roused a humongous crowd at the Moda Center in Portland, estimated in The Oregonian to be 28,000.

For serious analysts of politics the summer belongs to Sanders—and no other candidate can come even close to the size of his crowds or the clarity, passion and idealism of his message. The Republican campaign has become a reality television show while the Sanders campaign offers the reality of a surging movement of progressive politics, progressive organization and progressive inspiration that is transforming American politics under the radar of the national political media.

Remember where you heard it first: When the next quarterly campaign finance reports are released in October the political world will be shocked by the breathtaking increase in small donor money to the Sanders campaign.

When the last quarterly reports were announced in July and Sanders campaign had raised $10.5 million from small donors giving less than $200. The Washington Post story on this report was headlined: “The Bernie Sanders campaign, brought to you by small-dollar donors.”

If the major media and political worlds were surprised by the summer surge in support for Sanders, the increasingly huge crowds for his campaign appearances and his impressive small donor numbers in the past, they will be shocked and stunned by the humongous surge in small donors to Sanders that will be announced for the current quarter.

Everything happens for a reason, and the reason for the Sanders crowds and small donor surge is this: The coming political revolution that is caused by the explosion of social media combined with the waves of progressive grassroots enthusiasm and action that is widely ignored and disrespected by old-style political pundits opining on old-style broadcast media but is exploding throughout the social media world that is powerfully underestimated by those who meet the press and face the nation.

This is why I was one of the first to predict that Mr. Sanders has a very strong chance of achieving an outright victory in the Iowa Democratic caucus. Look at the Sanders Facebook page; count the crowds tomorrow from events promoted on his Facebook page today; watch the huge small donor surge that will stun the political world in October; and imagine the turnout in Iowa and other caucus states when the Sanders Facebook page posts the addresses of the caucus meetings and how, when Sanders builds it, they will come.

Fox News may be the Babe Ruth of cable television politics, but is a small potatoes minor leaguer compared to the progressive equivalent of the invasion of Normandy by the young people and liberals and progressives and idealists who are storming the beaches of American politics like tens of millions of little liberal Koch brothers who want to take America back from corruptions of big money and the stench of politics as usual and the arrogance and insiderism of political oligarchs and their mouthpieces and hired help.

In July I had a fascinating two hour conversation with Jenny Ta, a superstar West Coast social media entrepreneur and founder of Sqeeqee who predicted—and I entirely agree—that social media has begun to assume the politically powerful and profoundly game-changing role that television assumed with the Kennedy-Nixon debates in 1960. As Ms. Ta and I discussed, social media empowers the individual man and woman—not network television executives or cable television pundits—to determine the ideas and values they want to discuss, debate and share.

Even Wall Street is beginning to agree. This explains the recent mini-crash of old media stocks because of the well-taken fear of investors of a mass migration of eyeballs away from old media that wants to force-feed media product that fewer consumers want to buy, toward social media and new media that empowers citizens to decide what entertainment they want to enjoy, which political causes they choose to support, and what ideas they want to share.

This is why I have done everything short of staging a hunger strike to urge Hillary Clinton and her team to shed their caution and old media and old politics thinking and be bold and daring and speak to the real aspirations of real people in a real politics. In the end, voters will not care a whit about the email obsessions of the hyper-partisan right, but they will care a lot about whether Hillary speaks to them with clarity and conscience and authenticity in her way—as Bernie Sanders does today in his way.

The media visionary Marshall McCluhan said brilliantly at the dawn of television that the medium is the message. But McCluhan is dead and the age of television dominance is beginning to die before our eyes. What matters today is that the media and the message are fused together in the open and sharing communities we call social media, and not the closed shop of insider pundits regurgitating talking points on insider old media.

True politics is not a television show but a battle of ideas between alternative futures for America, offered by competing candidates and parties, in the marketplace of public opinion.

Yet not a word of GOP attacks against Obama or Clinton, or against other Republicans, offer any hint of how they would make life better for Americans if they were brought to power.

Meanwhile, while the GOP wages its obsessive war against Obamacare, and would rip away the insurance of Americans with pre-existing conditions and children now covered by the policies of their parents, Bernie Sanders calls for the one true and powerful healthcare reform of a single-payer and Medicare for All system that has worked wonders for leading democratic nations around the world.

When 15,000 people cheer Mr. Sanders in Seattle and 28,000 people are brought to their feet by Mr. Sanders in Portland they are applauding the causes he champions, the values he believes in, and the future for America he battles for.

Let Republicans battle over taxpayer-financed Congressional inquisitions in Washington, and the history of emails, and their low regard for each other, and whatever they battled over during their last debate. Bernie Sanders is battling for genuinely affordable college education, and truly universal healthcare, and a more fair and prosperous economy, and greater social justice, and an end to the corruptions of politics in Washington, and a better life for Americans who will cast their votes on election day.

The gigantic rise in crowds is a Bernie Sanders shocker that remains unnoticed by the bastions of old media and old politics, but the probable humongous surge in Bernie Sanders small donors that will be revealed in October could be a Mt. Vesuvius earthquake event that will make today’s political media freak show coverage a distant memory. 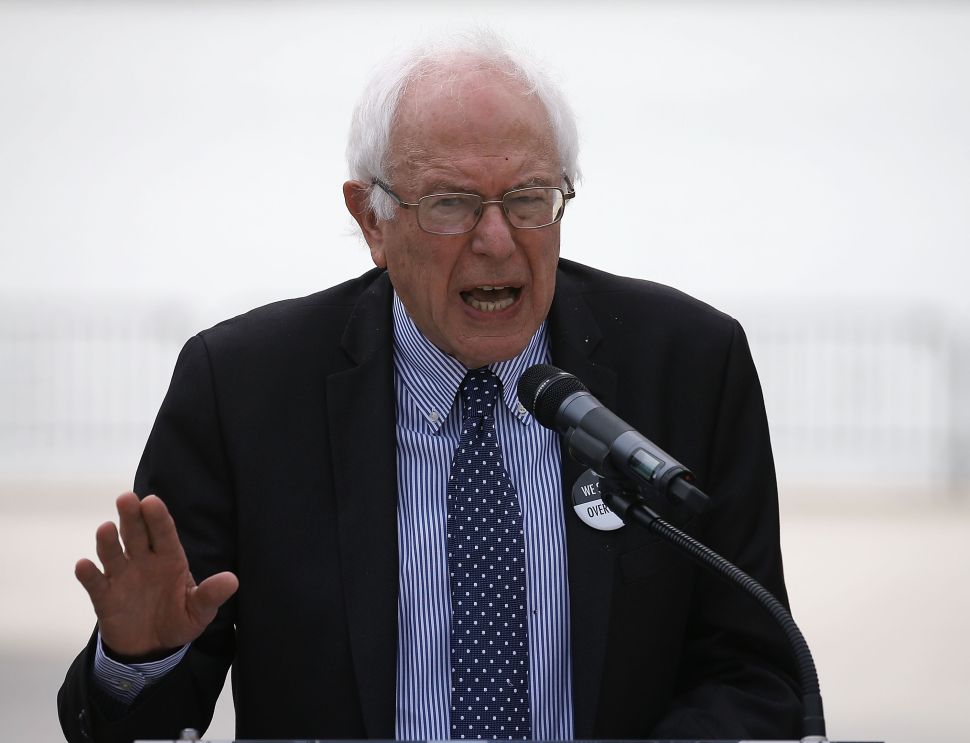