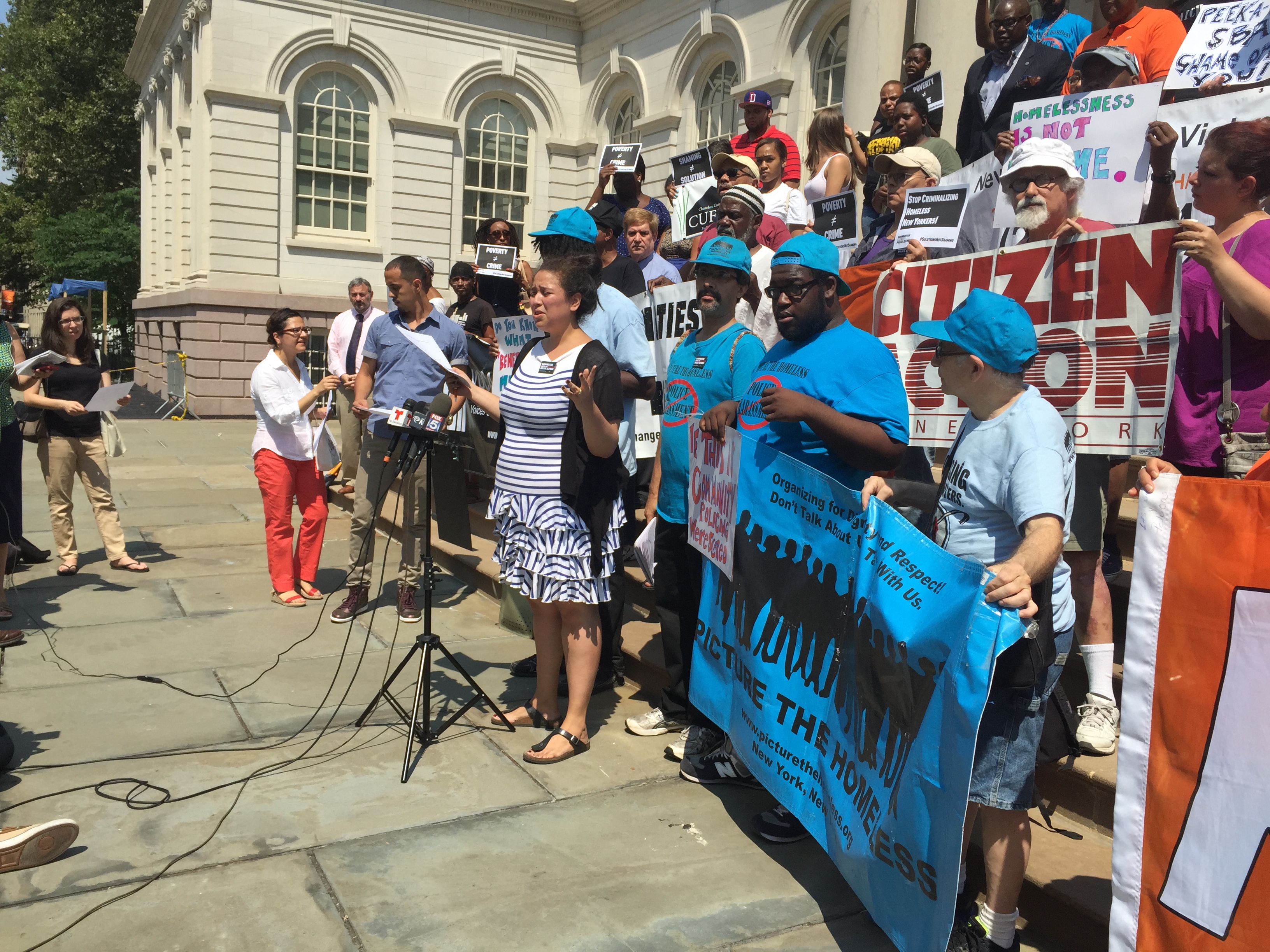 Advocates rally for help for the homeless outside City Hall. (Photo: Jillian Jorgensen for Observer)

Advocates took to the City Hall steps today to demand action to help the homeless—and bashing the Sergeants Benevolent Association and the media outlets for vilifying people on the street.

“To the New York Post and the SBA: homeless people are not the problem,” said James Addison of Life Experience and Faith Sharing Associates. “The problem is not enough decent affordable housing. That’s what we need.”

Still, the protesters directed most of their ire not at Mayor Bill de Blasio, nor at Gov. Andrew Cuomo, whose administration has cut back on homelessness funding to the city even as Mr. de Blasio has requested more for the NY/NY housing program. Instead, most of their outrage was saved for the SBA, led by outspoken Sgt. Edward Mullins, for the media, and occasionally for police, with advocates insisting homelessness not be criminalized and that homeless people not be targeted for summons for other minor crimes. (Police Commissioner Bill Bratton has said there is little police can do about the problem of homeless people on the streets, as it is not a crime to ask for money or be without shelter.)

“You know, most police officers understand and respect the dignity of someone who is homeless,” Councilwoman Helen Rosenthal said during the rally.

She recently met with cops in her Upper West Side district about the issue, and said the officers “had only kind and compassionate words to say” about the homeless in the area.

“What’s tacky, what’s not impressive, what’s sending the wrong signal, is the notion that a group who is supposed to represent the leadership of police officers would say take a photo of the homeless in your district, post it on the website to show how you’re not gonna be helping out anymore—you know what? That’s just wrong. It’s tacky,” she said.

Joel Berg of the New York City Coalition Against Hunger put it another way: “The may represent sergeants, they may be an association, but they’re certainly not benevolent.”

Mr. Mullins, president of the SBA, said he was pleased the advocates had taken to the steps.

“I hope they’re there tomorrow,” he told the Observer in a phone interview. “People are being unattended for and uncared for on the streets of New York, and it’s their job to put programs in place and address the issue of mental health and make sure that these people have somewhere to go.”

He said he hoped his photo project had spurred them to action on behalf of those homeless people:  “I feel I’m doing something as a New York City police sergeant, to address these issues by forcing these New York City public officials to help.”

But at the rally, the advocates universally painted Mr. Mullins’ project as an effort to mock and humiliate the homeless. Mr. Berg noted some of the people in the photos were in wheelchairs, while others were likely veterans. After the rally, he noted that mocking the homeless goes against every major religion—including Catholicism, which for a long time was the dominant faith among the police force.

“I urge you, when he comes to town, ask the pope what he thinks about this,” Mr. Berg said, referring to Pope Francis’ upcoming visit. “I guarantee he’s going to side with Jesus Christ and his love of homeless people—not to mention the fact that he was born homeless. So I would ask whether they’d humiliate Jesus Christ if he had no place to sleep.”

But Mr. Mullins said the idea he was trying to humiliate the homeless was “spin.” He said he’s a “huge” supporter of veterans, and a product of Catholic schools.

“We’re the greatest city in the world and we have human beings sleeping on the streets and we find that acceptable?” he asked. “I’m a product of Catholic schools, and you talk about Jesus Christ I never found that acceptable.”

Councilman Stephen Levin said that with the negative focus on the homeless, some people had begun to question whether the homeless have a right to shelter in the city.

“That is settled policy. That is 35 years old,” he said. “You have a right to shelter in New York City.”

After the rally, Mr. Levin said the Council had worked on homelessness by focusing on the budget and holding oversight hearings, but said much of the law and funding for the homeless was a matter for the state. He said Mr. de Blasio had worked to help deal with the “runaway train” or family homelessness, and now it was time to turn attention to single adult homelessness, which is more visible on city streets.

After DNAinfo reported that complaints to 311 about homeless New Yorkers had gone up by 60 percent, Mr. de Blasio argued that he thought the media had perhaps been focusing more on homelessness than was warranted, in turn driving up complaints.

Asked if he agreed, Mr. Levin said he would have liked to see month-by-month statistics, and noted homelessness can be cyclical—more people are on the streets in warmer summer months.

“Obviously this has become a bigger issue in the last couple of months,” he said. “I think there is a real possibility that that is leading to more and more people calling 311.”

Mr. Berg said he did think the media was overblowing homelessness, saying the tabloids in particular had not covered the issue as the population of homeless New Yorkers grew under Mr. Bloomberg.

(The population of New Yorkers in homeless shelters grew during Mr. Bloomberg’s tenure, from 31,063 in 2001 to 53,173 in December 2013, according to city shelter censuses. That figure continued to rise under Mr. de Blasio, to a high of 60,939 in January 2015, before falling down to 58,761 this June. The population of New Yorkers living on the streets—the issue highlighted by Mr. Mullins’ photo campaign and by the media—actually decreased under Mr. Bloomberg, according to the annual Hope count of homeless people on streets each February. The number of unsheltered New Yorkers counted was 4,395 in 2005 when the survey began, and fluctuated over the years before landing at 3,180 in 2013, Mr. Bloomberg’s final year in office. The population was at 3,357 in 2014, when the survey was taken just over a month into Mr. de Blasio’s tenure. In 2015, the first full year under Mr. de Blasio, the figure was, 3,182, down from 2014 and two people higher than 2013.)

Mr. Berg said the attacks on the homeless from the press and from the SBA seemed to be a proxy for a war on Mr. de Blasio. (The Post, at least, has been unabashed in its war on Mr. de Blasio—it is currently hosting a website with a clock counting down to the end of his first term.)

This story has been updated with statistics on homelessness under Mr. de Blasio and Mr. Bloomberg. 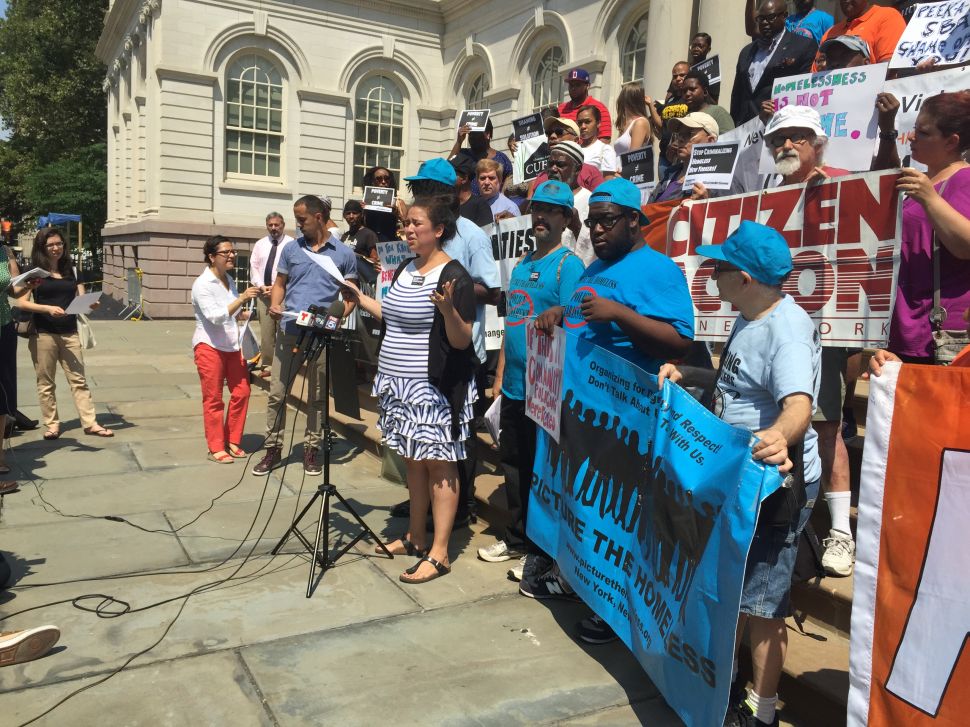