ATLANTIC CITY – At the North America Building Trades Union’s 69th annual convention in Atlantic City this afternoon, the organization passed a resolution encouraging Senate President Steve Sweeney (D-3) to run for governor in 2017. The resolution went through in a unanimous vote that met with applause.

After the passage of the resolution, Sweeney told PolitickerNJ that he was very pleased to be recommended by the committee and that issues like New Jersey’s flagging Transportation Trust Fund, higher education development and economic initiatives would be essential to his potential gubernatorial run. He also had harsh words for Governor Christie’s administration, its role in New Jersey’s exceptionally slow recovery since the recession and its inability to meet the required payment for the state’s pension fund this year.

“Labor issues are no different from anyone else’s. It’s ‘jobs, jobs, jobs,’” said Sweeney. “And this administration has not done a very good job of it. In fact, it was shocking to see how many jobs we just lost.”

Saying that labor leaders had sat down with Christie in an attempt to reach a compromise, Sweeney said he is disappointed that the governor’s approach to the pension issue has become more and more adversarial.

“If the governor would stick to the agreement that he had put forward in the beginning, we could have solved it. You can always go back at people when you’re making your best effort to fund this and there just isn’t enough money. The reality was, our economy lagged behind the entire nation’s.”

“We’ve only recovered 60% of the jobs since the 2008 recession,” said Sweeney of positions in New Jersey’s public sector. “Every single government entity in the country has recovered their jobs. We’re it.

“We have an obligation to these people for their pensions,” he added, saying that a true good faith effort to reach the minimum payment would be necessary for Christie to regain credibility with union leadership.

“We strongly urge him through the adoption of that resolution to consider running for governor,” said Sean McGarvey, President of the North America’s Building Trades Unions. “We think he would be a terrific person at the right time and the right place for New Jersey, and what the working families of this state need.

Said Sweeney, “I grew up in this organization. To have the national leaders unanimously support something that I’m considering and asking me to do it, it means a lot to me. These were the leaders of North America’s labor movement.” 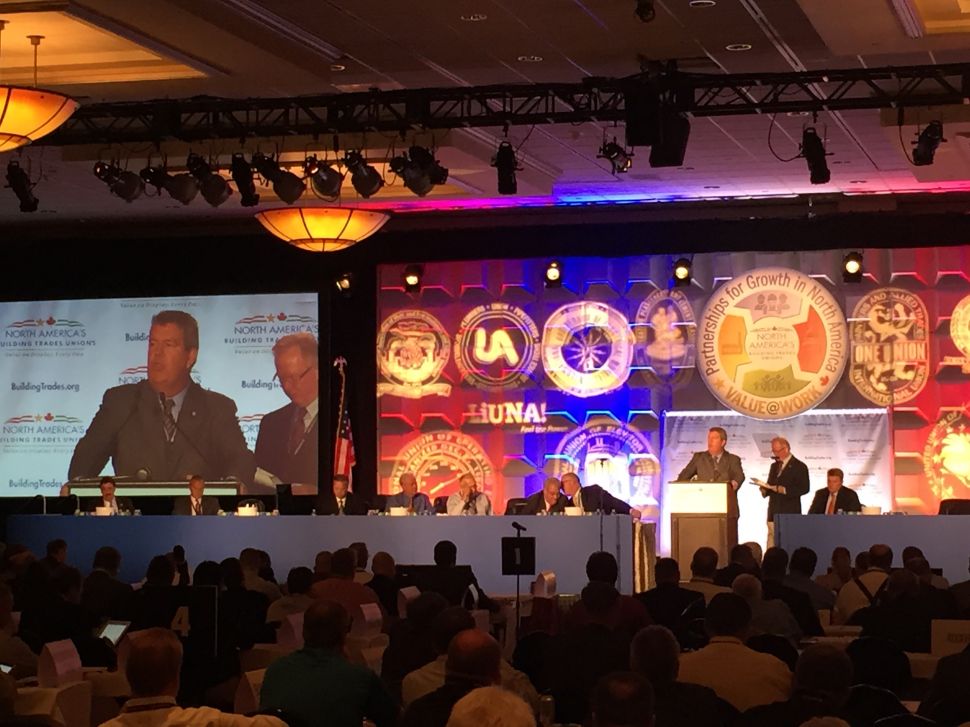