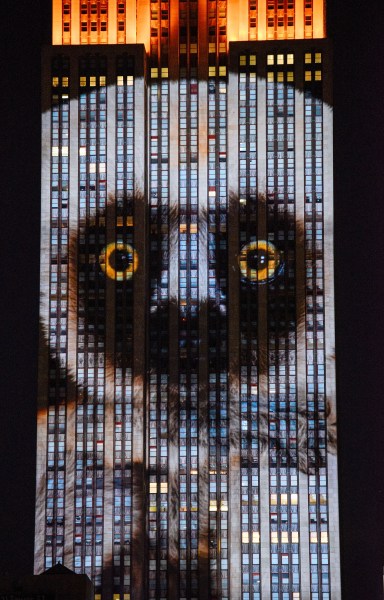 Last Saturday night, for the first time in its 84-year history, the Empire State Building turned into the King Kong of video screens.

Six blocks south, many guests crowded into the rooftop bar atop 230 Fifth Avenue for a bird’s eye view of Projecting Change, a video spectacle intended to raise awareness about the plight of threatened species (and drum up publicity for Racing Extinction, a new film by Louis Psihoyos, the director of the Oscar-winning 2010 documentary, The Cove).

‘We feel like the marketing department for mother nature,’ said Obscura’s Andrew Plourde.

“We’ve been trying for over a year to do this,” said director/actor Fisher Stevens by phone the day before (one of Racing Extinction’s producers; he also worked on The Cove). “Because I am a New Yorker and cynical, I was like, ‘Yeah, let’s try.’ The city is really tough, but Louie persevered.”

The dogged Mr. Psihoyos successfully lobbied Antony E. Malkin of the Empire State Realty Trust, enlisted Norman Lear to pull strings, and convinced Mayor Bill de Blasio to give his blessing for the spectacle. But the Department of Buildings initially resisted the idea. (While it could be criticized as thwarting innovation, one has to credit the department with its reservations—that is what keeps, say, the Pepsi logo from covering the Empire State Building on a nightly basis.) But DOB, fortunately, relented about five weeks ago, spurring the event’s organizers into overdrive.

Obscura Digital, the San Francisco-based technology studio, created the projections. Its team was stationed on another rooftop closer to the Empire State Building, where its staff spent the previous week setting up 40 HD projectors stacked in grids, angled up at the famous edifice like giant hairdryers. “We are really happy to be doing this,” said Andrew Plourde, Obscura’s technical director. “We feel like the marketing department for mother nature.”

It was not roomy on the rooftop. Guests squeezed by each other and had to work their way around two large dolly tracks set up with cameras, along with several roving cameramen, all recording the crowd’s reactions. Racing Extinction will be released in theaters this fall, and then, in December, will air on the Discovery Channel in over 220 countries and territories.

Footage from tonight’s event will be added to the final cut. 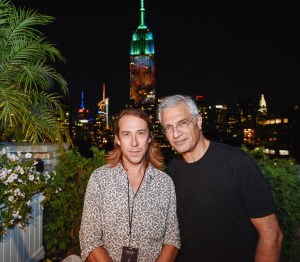 At 8:45, Mr. Psihoyos got up on the upper patio to say a few words. Dressed in all black, tall and imposing, he resembles Burt Lancaster in wire-framed glasses. “I always think about the words of Margaret Mead: ‘Never doubt that a small group of thoughtful, committed citizens can change the world; indeed, it is the only thing that ever has.’ ”

At 8:59, a countdown started and at precisely 9 p.m., oceanic waves rolled up the Empire State Building’s south facade, dissolving into a tiger, a lizard and then hands holding the earth. Blasting out of speakers, Sia sang “One Candle,” a new song composed for the film.

Soon the distinctive warble of Antony (of Antony and the Johnsons) played. “All the loving, all the separating… I cease to exist,” the high-pitched crooner sang, as butterflies floated up the 102-story screen. Timed with the video, the iconic building’s usual monochrome lighting began blinking and moving, mystifying many in the audience.

“I didn’t know the tower could even do that!” said a woman in the crowd. “How did they pull this off?” added a man in glasses.

Throughout the event, one couldn’t help but think of the recent killing of Cecil the Lion by an American dentist on a hunting holiday in Zimbabwe. It seemed like an unfortunate, but well-timed, occurrence, as Mr. Stevens pointed out. “I almost feel like Cecil took a bullet for the cause,” he said.  “These are the things it takes for people to wake up.” 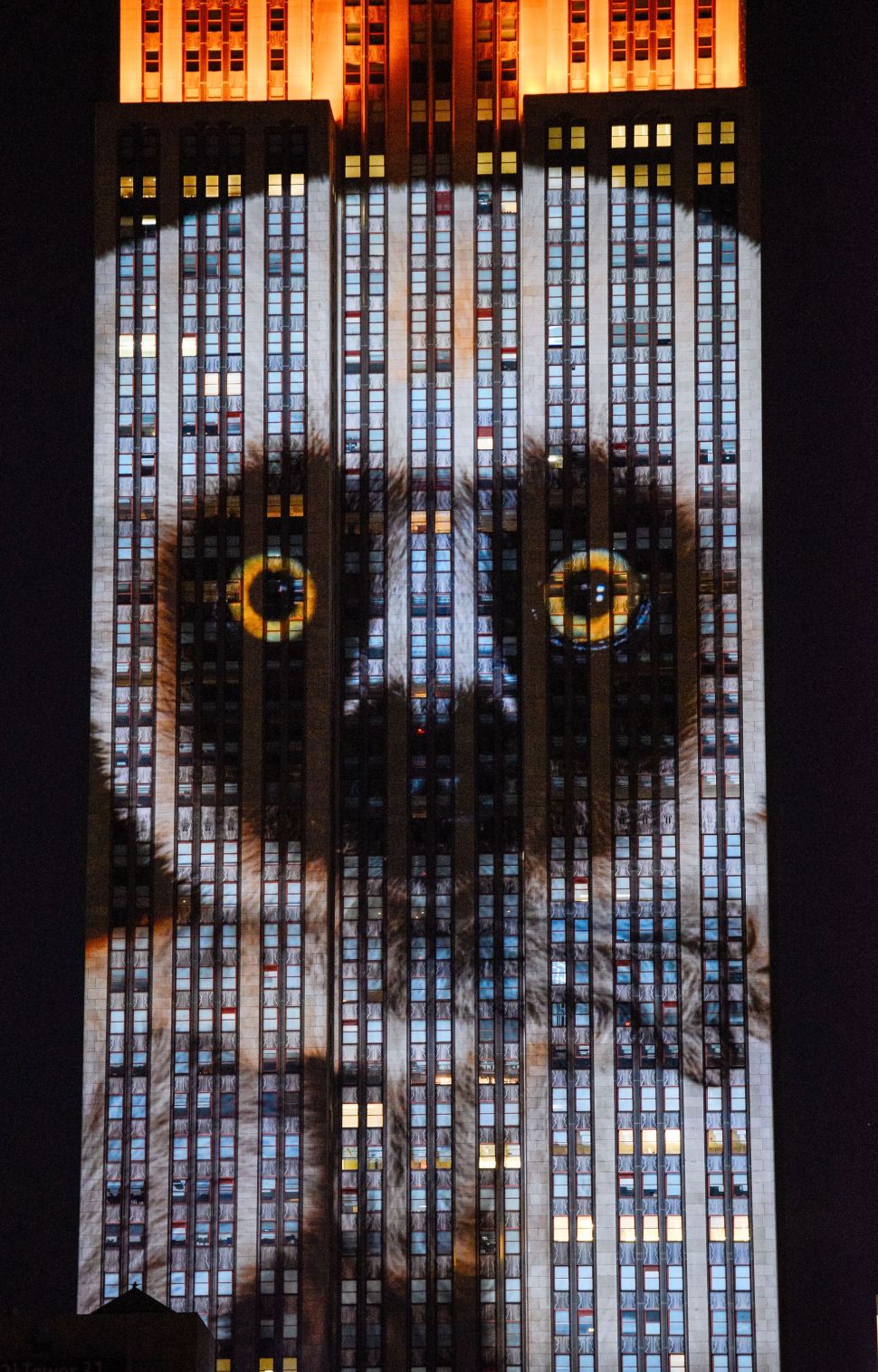