Since the beginning of the year, Putin’s propaganda industry, feeling the economic crisis, has had to tighten its belt. The Russian Information Agency TASS announced a 25 percent staff reduction and 20 percent salary cut for its employees. Rossiyskaya Gazeta, which holds the monopoly on the official publications of new laws and government decrees, fired 10% of its staff. Similar examples are innumerable, as Bloomberg reported in January.

Despite all the economizing, the level of anti-Americanism in Russia has reached its all-time high, fluctuating from 70 percent to 73 percent of negative and strongly negative feelings towards the US this year, according to the respected polling institution Levada-Center.

The possible explanation—somebody else is doing all the heavy-lifting for the Kremlin propaganda machine, helping it to save millions and outsource the humongous task of proving to the Russians that the West started the final, doomed-from-the-start crusade against Mother Russia.

One of the big helpers has been the Fox News channel and a handful of its analysts. (Yes, one can watch Fox News in Russia, as well as CNN, EuroNews and unlimited number of other TV channels the world knows).

Back in March, Maj. Gen. Scales infuriated the Russian public with his solution on how to help Ukraine regain control over the territories that have fallen into the arms of pro-Russia insurgents. “The only way the United States can have any effect in this region and turn the tide,” Mr. Scales said, “is to start killing Russians … killing so many Russians that even Putin’s media can’t hide the fact that Russians are returning to the motherland in body bags. But, given the [small] amount of support we’ve given to the Ukrainians, given the ability of the Ukrainians themselves to counter-attack against these, what? 12,000 Russians camped in their country … eh…sadly, it’s not gonna likely to happen”.

This gift from Fox News was eagerly accepted by the Kremlin propaganda machine and Russian media bit into the story like a pitbull.

“No less disgusting was the fact that the calls for the killings of our fellow citizens—of you and me—were made live by one of the leading national channels, during the prime-time, aiming at the maximum audience possible. This is exactly how the country’s mainstream media forms the atmosphere of hatred towards Russia in American society.”

The representative of the Russian Investigative Committee, Vladimir Markin, reacted with less political correctness, Tweeting the following: “We thought that, at the arrival of the spring, only maniacs, schizophrenics and pedophiles become more active, but it turns out, American retired generals also. We will keep this fact in mind.”

The US State Department, when asked for explanation, shrugged off the whole thing, stating that they didn’t comment on the views expressed by retired military personnel.

Russian media immediately made an anti-celebrity out of Mr. Scales, the main argument being “What if a Russian retired general would have gone on a major Russian TV channel and called for killing Americans in Ukraine? How would the State Department have reacted?”

As the scandal was growing, Mr. Scales was surprised to discover that Russians watch Fox News in addition to the “official propaganda” TV channels. “Isn’t it funny they watch us?” He said during his next interview on Fox. “I got emails today from people in Russia I’ve never heard of before. I didn’t know that the Fox News was watched in Russia but I’ll tell you this—Fox is not Vladimir Putin’s favorite network because … we are trying to tell the truth about what’s going on in places like Ukraine.”

He was even more surprised to discover that his statement launched a criminal case against him under the Russian Criminal Code Article 354 “Public calls to start aggressive war, made with the use of mass media” whose punishment varies from 500,000 rubles (or the criminal’s income of three years) to five-years jail term. According to the argument of the Russian Criminal Investigation team, “taking part in the live show of one of the TV channels, retired general of the US Army Robert Scales called on the highest political and military leadership of the USA, American citizens to conduct the military operations on the territory of Ukraine and to killing of the citizens of the Russian Federation, and, also, Russian-speaking people.”

In addition, Russia’s Investigative Committee stated that the retired general’s calls to “kill Russians” broke international norms, including Article 20 of the International Pact on Civil and Political Rights of 1966, which prohibits any war propaganda and any incitement to discrimination, animosity and violence.

“No vodka and no borsch for me” was the retired general’s public reaction to the investigation, expressed live on Fox News again. “If we don’t help the Ukrainians do something to take back lost territories in the east, if we don’t give the Ukrainians the weapons they need … The Russian military is in disarray. … Only military actions by the Ukrainians that we support will turn the tide,” he added.

Mr. Scales was not concerned “at all” about the criminal investigation that Russians launched against him, although he stated that his wish to vacation in Russia “is not gonna happen”.

According to Mr. Scales, the attack on him by the Russians was an attack on the First Amendment in the US and an attempt to intimidate the free press. Despite all the bravado, he abruptly canceled plans a cruise to the Baltics, being careful about the long arms of Russian Femida.

One of the papers wrote: “All the meaning of American politics is hidden, which is based on the unlimited egoism and egocentrism. It turns out that, according to the US general, to call for mass murder of the citizens of a particular ethnicity in front of multi-million audience – that is within the framework of things, it is allowed to him, but to call him to justice is an attack on western media and freedom of speech!”

Mr. Scales’ public statement that he had to buy the polonium detector as a precaution against the evil Russians most likely already plotting against him—an obvious referral to the mysterious murder of the ex-KGB Alexander Litvinenko in London in 2006—again hit the headlines in Russia, adding gasoline to the fire.

“How many diapers does he use in a day?” asked the representative of the Russian Investigative Committee Vladimir Markin via Twitter. “And the spring is still ahead of us!” Vice-Prime Minister in charge of the Russia’s military-industrial complex Dmitry Rogozin echo—also on Twitter—“He [ret. Maj. Gen.] is a real cuckoo! Let’s send him a diaper!”

“US general was prescribed diapers” was the least vicious of the newspaper headlines.

Nobody knows if the Russians in fact did send Mr. Scales a package of diapers or if he used his new detector to check it for polonium poisoning upon its arrival, but definitely the Russians have been on alert for his every word ever since.

Take my word for it—in Russia people don’t usually pay attention to San Diego Union-Tribune or to the opinions expressed in it—unless the opinion belongs to the retired major-general Robert H. Scales.

The very title of his piece, published on August 15, “The Army is broken,” was music to the ears of Russia’s hawks and America-haters.

On the day after Mr. Scales’ opinion appeared, Russian news media giant RIA Novosti published a story with the sensational headline, “The General Who Said ‘Kill Russians’ Complains about the Decline of the US Army.” Shrugging off the general’s intimate emotions expressed in the piece, the Kremlin media machine provided a dry summary of Mr. Scales’ outcry.

The US army is destroyed for the third time since the mid-20th century—this time, by the reduction of the army and defense budget cuts by ‘ahistorical and strategically tone-deaf leadership in Washington.’ The US army is broken by the lack of training and antiquated equipment. Low morale, alcoholism, hard drug abuse by soldiers, domestic violence and suicides among US troops led to the decline in ‘military spirit.’ Young army leaders are voting with their feet.

In other words, implied RIA Novosti, the US army is not as strong an adversary as it looks. It cannot be otherwise, since no less a celebrity Russophobe than retired major-general Robert H. Scales said so, the one who is wanted by Russian police for calling for the killing of Russian citizens.

There were no mocking Tweets this time, nobody offered to send diapers to America for Mr. Scales.

While retired US army general’s story was unfolding in Russia, the US State Department announced the renewal of its crusade against what it called “Russian propaganda,” heralding the increase in spending on the program, including a $500,000 grant to train journalists to fight “Moscow lies” in the Baltic states alone. If the point is to counter Russian rhetoric, the State Department might do better to spend its half million keeping General Scales away from microphones and keyboards. 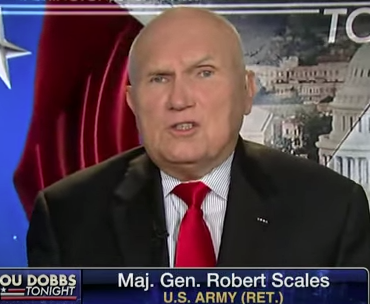