Ben Carson, a Republican presidential candidate and retired neurosurgeon, said today that Donald Trump’s surge to the top of the GOP heap is good for the Republican Party.

Mr. Carson, speaking to reporters outside Sylvia’s Restaurant in Harlem, argued that the bombastic billionaire is engaging more voters in the democratic process.

“I think he’s bringing more people into it,” Mr. Carson said. “I think he’s getting people excited who have, you know, felt that nobody’s listening to them and that nothing’s gonna change so that’s good.”

Mr. Carson, the lone African-American in the primary, met with business leaders and religious leaders in Harlem, a traditional seat of black Democratic power in America. He came to New York at the behest of another black Republican, John Burnett, who ran unsuccessfully for city comptroller in 2013. (Mr. Carson previously traveled to New York City in April to speak at Rev. Al Sharpton’s National Action Network convention.)

Though most pundits–as in the case of Mr. Trump, a celebrity real estate developer–give Mr. Carson little chance of becoming president, he is inspiring grassroots conservatives with his attacks on the Obama administration and liberal economic policies. Mr. Carson himself is no stranger to controversy: though soft-spoken, he has compared Obamcare to slavery and likened same-sex marriage to bestiality.

Mr. Carson is one of the few Republicans to not offer some kind of criticism of Mr. Trump, who leads the field in the polls despite a string of comments and incidents that would have permanently damaged the campaign of a typical politician. Mr. Trump has questioned Sen. John McCain’s war record, insulted a popular Fox News host and said illegal immigrants coming from Mexico are “rapists” and “killers.”

Both Mr. Carson and Mr. Trump are drawing strength from the most conservative elements of the GOP, where front-runners like Jeb Bush, the former Florida governor, are viewed skeptically. Mr. Carson today derided Democrats for leading America on the path to socialism.

“You’ve got certain people saying, ‘There, there you poor little thing, you can’t take care of yourself. We’re gonna take care of you’ and they’ve gotten people to believe they can’t survive on their own which is absolutely ridiculous,” Mr. Carson told Observer. “We never will succeed by saying, ‘Oh he’s got this, let’s take his and give it [away].’ That doesn’t work. That’s called socialism. That’s not what made America into a great nation.” 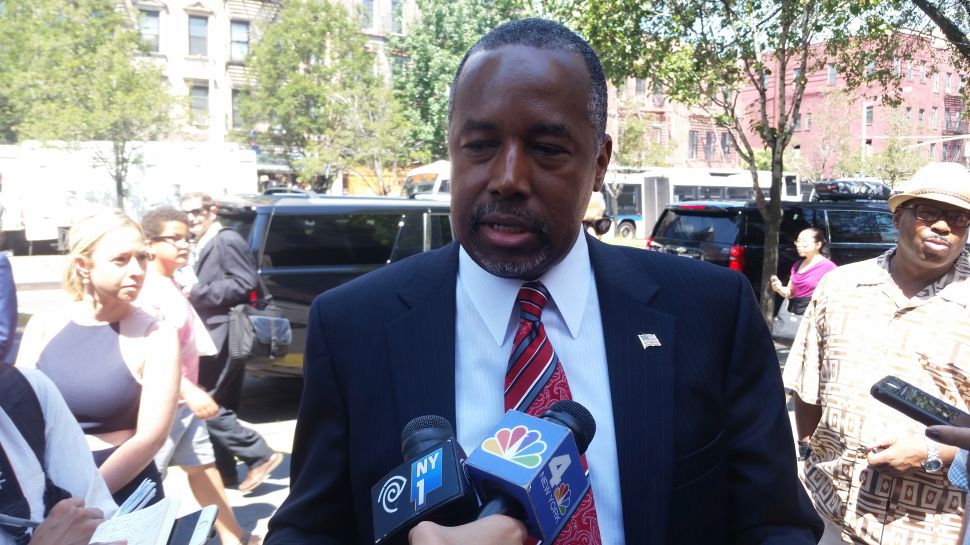