Thomas Sullivan is a candidate running for Bergen County freeholder.

Thomas Sullivan Jr. was appointed to the Bergen County Board of Chosen Freeholders last year when former freeholder Jim Tedesco was elected to serve as the Bergen County Executive. Now, the Democrat is running to keep ahold of his seat and hopes that his experience in government and labor-oriented career can propel him to win the upcoming November election.

While Sullivan was not elected to the board, his turn as a freeholder is not the first time he has been involved with government.

Sullivan also currently is the president of the IBEW Local 164 union, which represents over 2,600 electricians in Essex, Hudson, and Bergen counties. For Sullivan, that role translates to support from those groups as well as valuable experience that can change the future of Bergen County.

“I am a labor kind of guy, I am a blue collar guy,” said Sullivan. “I think people can support my values. I don’t think they will come out just because I am a labor candidate but because they believe in the cause.”

If elected to a term on the freeholder board, Sullivan said one of his main goals is to help people in Bergen County find jobs.

“I have talked to the technical schools about apprenticeship programs and being able to put kids into technical schools,” Sullivan said. “This way, if they don’t go to college, they have a path to a good career. I am able to lend my expertise on that to the county on how to transition to life other than college.”

For Sullivan, an increase in apprenticeships in Bergen means that more young residents can find “jobs that are careers and not just jobs that are going to last them a month or two.”

If elected, in addition to tackling unemployment and underemployment, Sullivan also plans to push forward on another issue that is impacting Bergen County’s young population: the heroin epidemic.

“I have really taken on the heroin epidemic to a high proportion,” Sullivan said when asked what on his track record as freeholder he feels is most notable. “I met with the prosecutor over ways to combat it. I think that is something I am at the forefront on and will continue to do.”

According to Sullivan, his desire to serve on the board has little to do with his party affiliation.

“When you are serving your county, I think it is important that people are in the position to do the right thing,” Sullivan said. “I think you need to believe in who you elect and whoever is there should do their job regardless of party affiliation. And I have shown that, I have reached across the aisle. You have to be able to separate parties in politics.” 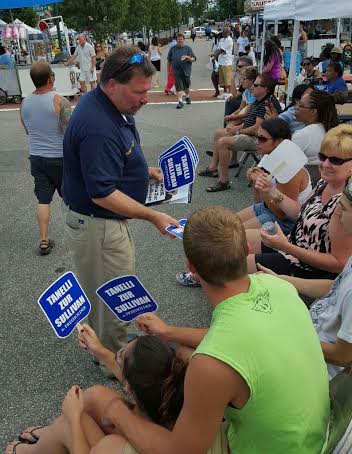