I recognize the fact that there are a few different types of Big Brother watchers. Not everyone goes in for the spoilers and Livefeeds. With that in mind, I never want to put out any info here that would give something away before its proper time. That being said, I cannot hold off any longer on my mourning for Becky being officially out. Last night, the competition for the current Jury house member to rejoin the game was played as part of the Head of Household competition. It was an endurance challenge and whoever was left of the Jury cast made it back into the house. The person that stayed on the longest, including that one Jury contestant, would become HOH. I won’t spoil it other than to say, it wasn’t Becky.

Oh Becky, my Becky, our time together was so short. You will never just be “the girl that got hit in the face with a train” to me. You genuinely seem like an okay person who tried to play some game and couldn’t pull it off. Me and you, we’re cool for real. Not fake cool, like when I said Austin and I were cool last week. We’re real cool.

Aside from losing Becky, this was a tough week all around. Look, not every day can be Christmas, okay? This week kicked off with possibly the most boring Head of Household competition of all time. Everyone had to line up along a track starting line. There were two buttons on the ground for your hands and one on a foot pedal for your feet. Once you pressed these down, you weren’t allowed to let go of any of them or you’d be disqualified. Then, you’d look at a screen and wait for it to say “Ready, Set, Go” except instead of “Go” different words would flash that rhyme with “Go.” Like “Blow” as in that is what this competition is doing. Once “Go” went off, everyone had to run and the first one to hit a buzzer like twenty feet away wins. Last person to hit it is eliminated. The problem is that half of everyone competing let go of a button so it was mostly all false-starts. I think they only showed two actual relays being run. I was looking forward to seeing these races play out because

Of course, Austin won because Austin is a foot taller than everyone else and basically hit the button from thirty feet away like at the end of Space Jam when MJ realizes he can do cartoon stuff too and he dunks from half court by making his arm really long. It took about twenty minutes of airtime to run this whole thing and it just didn’t come off right.

It was only a week or two ago that Steve mentioned he felt like people took their speeches a little too seriously and I agreed. Then Austin / Judas dropped bars during his nomination speech like it was the DJ Clue Desert Storm mixtape. He included such gems as “Life is meaningless and important at the same time.” And “We’re all gonna die.”  Plus my personal favorite, “Victims aren’t we all.” I think I am starting to understand Austin though. He acts like he’s from another planet because he actually is from another planet. Austin has seemed really familiar to me this entire time. And now I’ve cracked it. Austin speaks in cult-like code because he is actually Justin Theroux with Forrest Whitaker’s hair from Battlefield Earth. He is a Psychlo from the Year 3000. Be careful Liz, he’s going to try to suck out your Thetans.

Speaking of Austin and Liz, Zingbot came through the house this week. If you don’t know Zingbot, he’s a giant robot who comes in and disses the houseguests. His insults this year were kind of soft: James is in the friendzone with Meg, Meg’s gameplay sucks (bonus for the Sex and the City reference since Meg is from NYC), Steve is a dork that misses his mom, Vanessa cries a lot. But his zing on Liz about Austin having a girlfriend was definitely the most brutal. They’re downplaying this angle a little bit on tv, when Austin won HOH, Liz was truly worried his letter from home was going to be from his girlfriend. But I’m sure if/when Austin gets eliminated, Julie’s going to hit him with some girlfriend Q&A.

James’s pranks continue to be a highlight of the show. If he gets eliminated, I don’t know what they would fill all that airtime with…? Somehow, he and Meg have managed to stick around this far into the game. Meg is really, really where the entertainment is these days. The veto competition this week involved recognizing features from the houseguests’ faces. Meg, who has yet to win a comp, got stuck on her own nose. Now, I’m not going to blast Meg for this because actually the face you end up seeing the least in the house is your own. I have no true idea what my nose looks like and if I ever saw it out there in the open, I’d lose because I would refuse to acknowledge it as my own. But it’s just so typs Meg at this point to have her own face screw her up. Don’t be shocked if Meg slips by until late in the game and then happens to find her comp and wins one. It’s happened before

At this point, everyone has had alliances with each other and they’ve mostly all been broken and backstabbed. The thing I don’t get is how nobody has made a move on Austin and the twins. They’re the only group that has remained loyal to each other. Normally, a two-person alliance is dangerous this late in the game, they have three people! And their names are not even being mentioned. Everyone is talking about Vanessa. The key is to go after Liz. She’s the lynchpin there. Julia and Austin don’t exactly get along. You take out Liz, you got from a three-person alliance to two-people who may or may not go elsewhere. Johnny Mac is looking to take out Meg if he gets back in the game? He’s bugging. If someone doesn’t make a move on Battlefield Earth soon, one of those three is going to take it all.

Head of Household and Jury member back in the house will be on Sunday. Veto on Wednesday. Double eviction next Thursday! 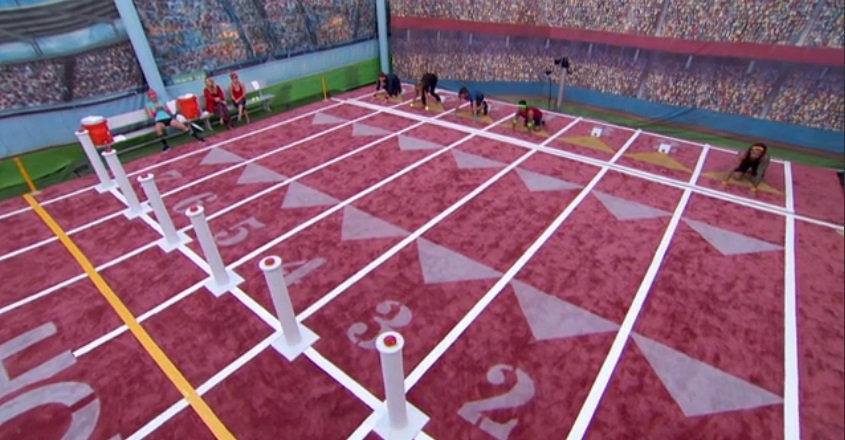