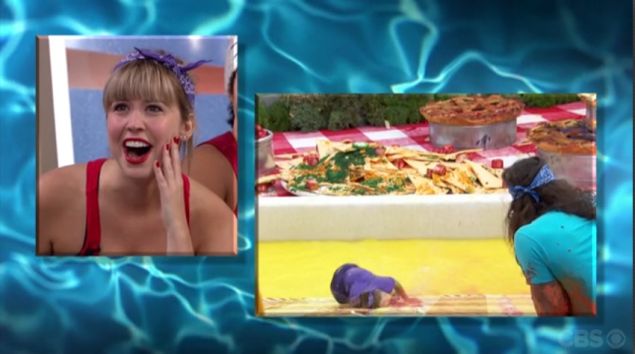 I wish I was publishing this on a 2004 MySpace page so that when you opened it up, Boyz II Men’s It’s So Hard to Say Goodbye to Yesterday would automatically start playing (editor’s note: just hit play and pretend). Last night, my girl Becky was eliminated from the Big Brother house. Hashtag-BasicBecky, the Trainiac, herself.

I will not yet write Becky’s eulogy on here, because there is a chance Becky could be back next week when the three current Jury members (Shelli, Jackie, Becky) and whoever is evicted next week will get a chance to compete to get back into the house. Becky could be back so I hold out hope of seeing her again. Until then, I will treat this as if it is our nation’s most holy of holidays, Rex Manning Day in which one must refuse to let oneself cry.

I have to talk about Steve for a minute. Steve has very shadily crept up the entertainment ladder the last few weeks for the following reasons:

The one question I have about Steve has to do with his speech pattern. Does Steve wear a retainer sometimes? You’d think Production would not do interviews with him if it were in. I’m not here to poke fun at someone with an actual speech impediment so if it is a real lisp, I will sit down about this. But the thing is, it’s totally inconsistent. Sometimes he doesn’t have it and then other times, he sounds like Mac in that episode of Its Always Sunny in Philadelphia when he’s wearing the wooden teeth. I just want to know one way or another and I’ll never bring it up again.

I’m not rooting for Steve to win, but I’m definitely enjoying watching his hijinks. Much the same way that I don’t think I want James to win but at least he’s making the house interesting with his pranks. I could watch an entire show of people hiding in the dark and jumping out to scare someone but that’s just me.

The big news of the week is a little bit of a scandal. I don’t want to go into too much detail about it because to me, what happens in the HoH room, stays in the HoH room (even if it’s done with 24/7 hi-def cameras recording in night vision). If you know what I’m talking about then you know. And if you don’t know what I’m talking about just do an internet search for “bb17 austin liz finger.” I cannot confirm or deny whether this actually happened but there is obviously Livefeed video of something happening and ever since this alleged event the Livefeed cameramen have been zooming in on Austin’s fingers so there’s at least a major implication that something happened. Either way, the fact that the network show talked about Liz’s hickey as if it were a major deal makes this all the more titillating to the fandom.

Lit Meg didn’t actually make an appearance this week but Meg did faceplant during the veto competition. It was Otev, which is a repeated favorite, where this huge monument sings out a clue and then the houseguests have to run down a ramp, find the name of the evicted houseguest that matches the clue, run up a ramp, and present it to Otev. Each round, another pedestal disappears like in musical chairs and someone is eliminated. Meg ran up the ramp, tripped, and busted her face on it. Man, I like Meg. Meg gets some heat for basically losing every competition first but she does it with huge personality. Her nickname is “Grandma” which is awesome, and also the name of the debt collector inRounders, which is a movie I’m sure Vanessa has seen one-hundred thousand times. Vanessa has now become a target of most of the house. They’re all onto her like Ed Norton’s card cutting from Rounders.

Johnny Mac knew he was safe being on the block against Becky this week so he gave the “it’d be dumb to keep me around” farewell speech which was cool, I guess. I agree with Steve that people make too much about the speeches. The whole house’s mind is usually already made up by that point, they never sway anything, and they don’t really get good unless it turns into a fight. The interesting thing for me was that Johnny Mac decided to dress for the live episode like he was the guitar player in AC/DC. Most of these houseguests don’t give a damn about how they look on tv. I’m not saying last year’s parade of men’s fashion between Frankie, Cody, and Caleb, etc. was preferable, but Austin didn’t even put on a shirt to play HoH live last week.

Speaking of Austin, in my travels around the web seeking out Big Brother content I have found the ultimate item. Austin is a professional wrestler so I figured there are probably several videos of his matches. I wanted to see what Austin looks like in the ring. This may be old news to Big Brother diehards. But this is a video of Austin wrestling a woman named Andrea the Giant. Well, technically I guess it is a video of Judas wrestling a woman named Andrea the Giant. The referee is a man in a gorilla suit. Judas enters the ring to I Adore Mi Amor by Color Me Badd. He’s shirtless (obvi) but wearing a peace sign necklace from Claire’s. There’s an image up on the screen, a painting of The Last Supper but instead of food on the table, there is a stripper-looking woman dancing for all the apostles. Get it—Judas! The match begins and tango music starts to play but instead of wrestling, they lock arms and mimic a dance. It is simply THE GREATEST WRESTLING VIDEO I HAVE EVER SEEN. Austin, we are now cool. Very cool.

The Head of Household competition went into the Livefeeds so I won’t spoil it. We’ll find that out on Sunday along with nominations. Veto Wednesday and a Zingbot appearance. Eviction Thursday along with the Jury competition to bring someone back into the house. 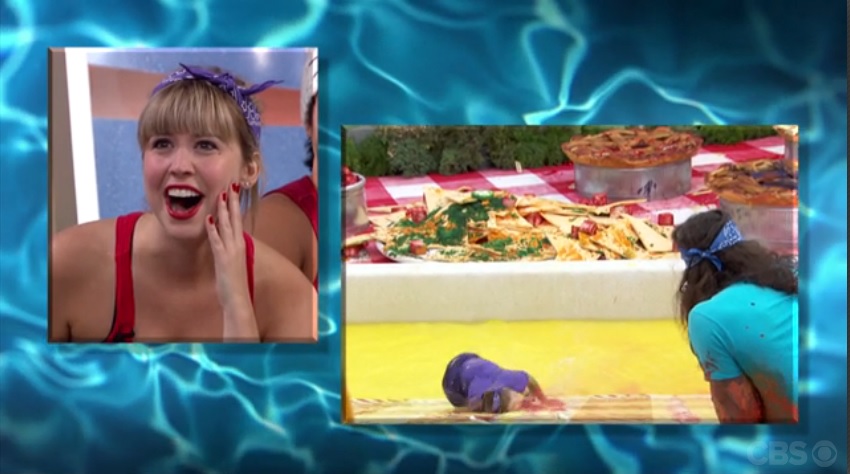