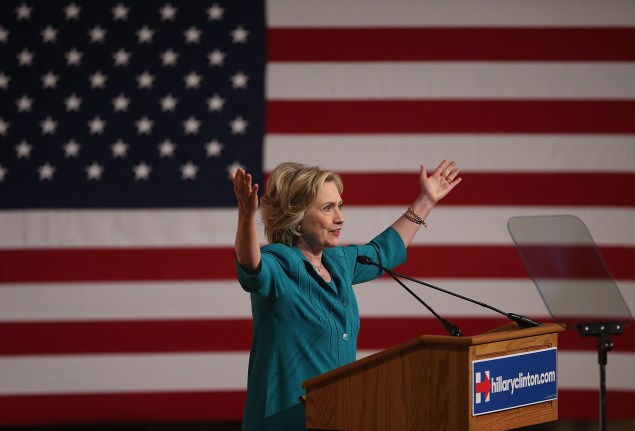 Democratic Presidential hopeful and former Secretary of State Hillary Clinton calls for an end to the Cuban trade embargo as she gives a policy speech at the Florida International University on July 31, 2015 in Miami, Florida. (Photo: Joe Raedle/Getty Images)

The most significant moment of Bill Clinton’s rise to the presidency was the choice of then Senator Al Gore to be his vice president. Mr. Clinton was from Arkansas. Mr. Gore from Tennessee, the adjoining state. The idea of regional balance never entered their minds. Mr. Clinton and Mr. Gore did not then and do not now represent states or regions. They represent a distinct generation. They see themselves as representing “the world” but hovering above it like a UFO, broke free from the mortal coil of earth. They saw their generation as rising to world dominance and they its high priests.

Like all things, each generation has a beginning, a middle and an end. Theirs began fifty years ago this month when Bob Dylan put aside his acoustic guitar for a Fender Stratocaster at the Newport Folk Festival. All would rise from that. The Beatles met Mr. Dylan in New York. The encounter stirred them on to greater artistic vision and the age would find its epiphany in John Lennon’s cryptic claim to be the “Eggman” – Mr. Lennon’s transfiguration possibly related to a visionary painting by Salvador Dali in 1943 entitled Geopoliticus Child Watching the Birth of the New Man, in which a Krishna-like avatar rises out of an egg suggestively to awaken the world again. Such mystic rumors swirled in torrents throughout the brief era, egged on perhaps by Mr. Dylan’s command in 1966 that “. . . everybody must get stoned.” (Mr. Dylan, at times a born-again Christian, later suggested in a Rolling Stone interview that he was referring to the Book of Acts and ”couldn’t really identify with what was happening.”)

The Millennials are a misconception, something more is ahead. And that new generation will repudiate the preceding generation, just as every generation does.

In the following year, in the Summer of Love, everybody did get stoned in an astonishing, historic hippie scene in the Haight-Ashbury district of San Francisco, birthing a new era potentially, birthing a new millennium.

It was an extraordinary time. Oddly enough, even back then, Mr. Gore was a figure. A wildly popular novel by Erich Segal, Love Story, was said to be about the friendship of Mr. Gore and his college roommate Tommy Lee Jones. And Hillary was as well, having been featured in Life Magazine as a rising leader of the generation.

And that is a problem now for the Democratic Party. It could be a problem for America. As in generationality alone, we do not hold real estate, but as in Woody Guthrie’s tune, “Pastures of Plenty,” “we come with the dust and we go with the wind.”

That is Hillary’s problem today and Bill’s and even Bill Cosby’s. Questions arise today about Mr. Cosby’s behavior: Why did the women not speak out sooner? The answer is that until now perhaps, no one would listen. Mr. Cosby, like Mr. Gore and the Clintons, was an icon, an avatar of the generation. They could do no wrong in their times. So the question is for our purposes, why do collective ire and righteous indignation arise today?

Because the generation has passed in its authority. And Hillary, who was never really a key figure in the generation but more of a Madame Mao figure chasing after the blue fire trail of the geist which brought Bill to god-king status, will take the hit now and hard. We are beginning to see it.

In the chronicles of generations which make a civilization’s cohesive period of statecraft from beginning to end, it is in the nature of each generation to despise the last. It is not here yet; it is too soon. The Millennials are a misconception, something more is ahead. And that new generation will repudiate the last generation as every generation does, as the hippie generation despised the world-conquering warrior generation of WW II.

Worse than that, in generational terms, America is almost on the cusp of a revolutionary paradigm.

Washington chopped down his father’s tree. The great anthropologist Sir James George Frazer wrote that they do it every time; it is a primary necessary action of a new generation which wishes to rise to dominance. The idea is to repudiate everything which the last generation held of value. They will chop down Bill’s tree as well. The generation is no longer “relevant” – a phrase heard constantly in the Sixties to refer to anyone over 30.

And Hillary will now begin to take the hit hardest as the wife of the emperor never satisfies anyway and extending the generation’s empire beyond it’s time draws the heaviest fire and the most caustic, Kafkaesque condemnations.

The Clintons have already brought great injury to the Democratic Party. New shoots arise with Massachusetts Senator Elizabeth Warren, New York Mayor Bill de Blasio, former Virginia Senator Jim Webb, former Maryland Governor Martin O’Malley and above all Vermont Senator Bernie Sanders. But it will take longer now for this group to coalesce and materialize into policy-based action and passion. If Hillary remains and takes the nomination, it will send the Democratic party over the cliff.

Worse than that, in generational terms, America is almost on the cusp of a revolutionary paradigm. Pat Caddell, liberal commentator and consultant, has said not long ago that “this country is on the verge of an explosion”; that we have entered a “pre-revolutionary condition.” The states in the middle of the country have in the last ten years adopted the language of insurgency. Mrs. Clinton’s election to the presidency could trip the wire.

And that is perhaps why state governments suddenly, spontaneously, turned red all across America in 2014. The day approaches, a benign annoyance that grows vaguely threatening as time draws closer, as we have felt her approaching since she first entered the White House as First Lady and refused to bake cookies.

Now it comes into sight. But now heartland America, the South, the West and the middle, appear ready; “Ready for Hillary.” 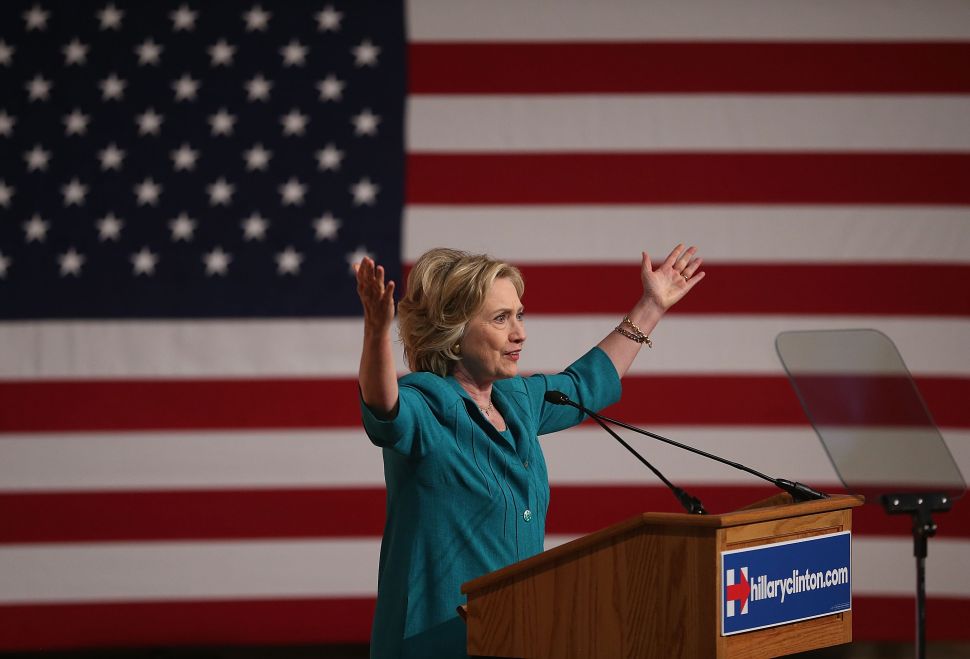