Is it possible that a boy’s misstep in a Taipei Museum may have exposed a low-rent fake in a major exhibition?

The Taiwanese newspaper The Apple Daily is raising the issue that the supposed $1.5 million Paolo Porpova Flowers artwork that the boy’s fist went through over the weekend may actually be a far less pricey work by artist Mario Nuzzi that was spurned at an Italian auction last year at a price of $30,000.

To recap: While visiting the exhibition “The Face of Leonardo: Images of a Genius” at the museum Huashan 1914 Creative Park over the weekend, a 12-year-old boy caught his foot on a barrier and tumbled into what was identified in the show as a 350-year old oil painting, putting a small fist-sized hole into the bottom half of the canvas.

The boy was visiting the museum with his mother on a guided tour of the exhibition, which includes a selection of 55 rare works from the 16th century through the present. The incident received worldwide attention.

Taiwanese press found a virtually identical image by Mario Nuzzi, a contemporary of Porpova’s who is not as renown, and questioned the authenticity of the artwork. Our resourceful colleague Brian Boucher at artnet.com found that Nuzzi in artnet’s own auction database. 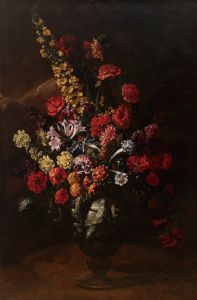 The painting identified as Flowers by Paolo Porpova.

Porpova was a leading 17th century baroque painter specializing in floral still lifes. Organizers of the exhibition say the painting is a Porpova.