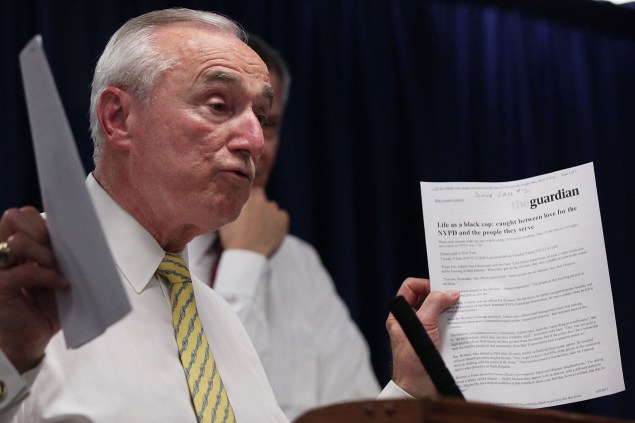 Police Commissioner Bill Bratton today reiterated that, despite intense media coverage, crime is not actually surging on the streets of New York this summer—but allowed that an increase in homeless people on the city’s streets might make it feel that way.

“The perception is different than the reality, and the perception is understandable, as it relates to first off to homeless related types of behavior,” Mr. Bratton told radio host John Gambling during his show on AM 970 The Answer today. “We have seen an increase in homeless and homeless-related activities on the streets of New York.”

That activity has garnered a great deal of media attention in recent weeks—beginning with the New York Post devoting significant ink to a man who urinated in the street. While Mayor Bill de Blasio often scoffs at such coverage from the city’s tabloids—especially the Post—the coverage often influences other news outlets, and off-topic portions of recent press conference have been peppered with questions about homelessness and crime. Last week, CBS aired a package about a man who took a bath in a fountain at Columbus Circle.

The spike in homelessness, coupled with several high-profile shootings—including one multiple shooting in Brooklyn where a pregnant woman lost her fetus this weekend—are driving the perception crime is on the rise, Mr. Bratton said.

“But the reality is, John, that crime is continuing to go down in the city,” Mr. Bratton said.

Shootings—which often spike in warmer months—are down compared to last year, Mr. Bratton said—when there was a great deal of media coverage devoted to an uptick in shootings. While murders are up “by about 15 or 16,” the commissioner said he expected that to level out by the end of the year.

While the department is aggressively trying to curb shootings with programs designed to flood problem spots with cops, Mr. Bratton said there is less his department can do when it comes to homelessness.

“We are very limited, being quite frank with you, in what we can do,” Mr. Bratton said. “The idea of being homeless, the condition fo being homeless is not against the law.”

Homeless people have the right to sit in parks, or on subways, or, under the Constitution, to beg for money.

“If you see somebody sitting on the street with a sign that, ‘I’m homeless help me,’ you might be disturbed by it, it may upset you, but it’s not against the law,” Mr. Bratton said.

Aggressive panhandling—or dancing on subways for money, an activity Mr. Bratton has railed against since his time as transit police chief—is illegal, and officers can enforce those issues. But much of the behavior people are complaining about doesn’t fall under those guidelines, and has more to do with mental illness, Mr. Bratton said.

“A lot of the behavior is not against the law. It is the way it is,” Mr. Bratton said. “I’m damn sure not going to be encouraging my cops to break the law to enforce it.”

Mr. Bratton said he believed the problem stemmed from the end of the use of institutions in the 1970s, with day clinics meant to treat people never getting built and the mentally ill turning instead to the streets. Many of those on the streets of New York should be in institutions, Mr. Bratton said.

“What happened? They ended up in the streets, so a lot fo the behavior that is so disturbing and scares people are actully mentall ill people, a number of whom really need to be in institutions where they receive appropriate care. They should not under any circumstances be out on the streets,” Mr. Bratton said.

He said the mayor’s approach would be comprehensive and coordinated, and loop in agencies who can have more impact than the police.

The commissioner sought to differentiate the homeless from the kinds of people who were involved in this weekend’s multiple shootings—and said people who are often pushing to reduce incarceration rates should keep in mind the city’s criminal element needs to be behind bars.

“There are people in our society, I’m sorry, they’re criminals. They are bad people. You don’t’ want to put them in aversion programs.  You don’t want to work to keep them out of jail,” Mr. Bratton said. “We need to put them in jail.” 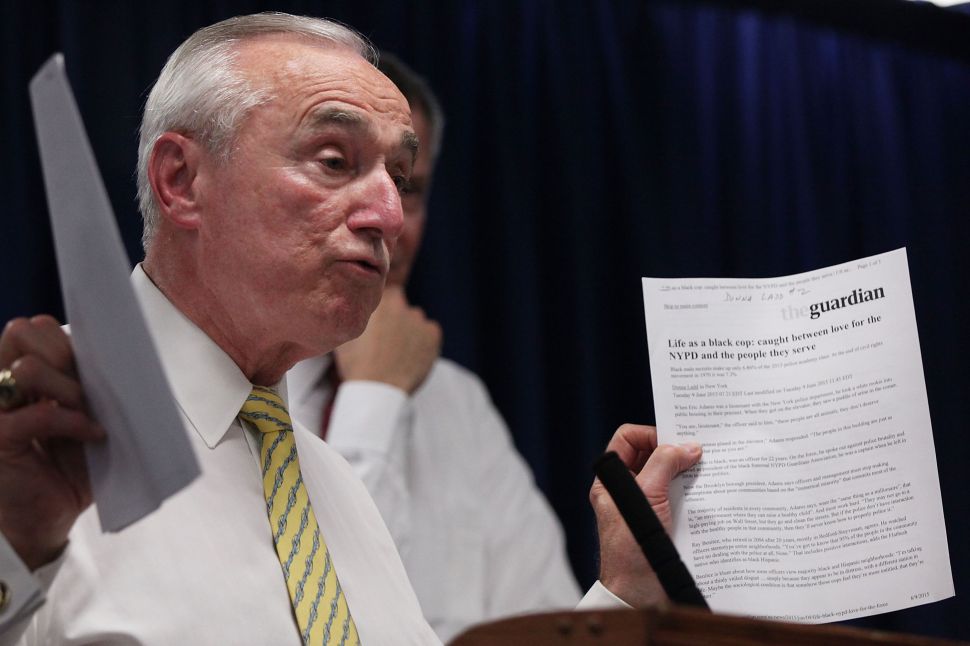