First, the breaking news: A Facebook-driven grassroots movement of Bernie Sanders supporters is seeking 100,000 or more RSVP’s from other Sanders supporters to attend a mass rally at the Washington Mall on or around October 17, with the theme “enough is enough,” in support of the Sanders candidacy.

As of Monday morning, this Facebook RSVP movement has garnered over 87,000 signatures and is preparing to formally present the idea of a Sanders movement march on Washington later this week.

In effect if one views the Sanders campaign as a movement for social change that advances beyond the tactics and strategies of a conventional political campaign, which is largely driven by a social media movement that advances beyond the insider-driven mainstream media, the push for a grassroots Sanders march on Washington should be viewed as a movement within a movement and the ultimate expression of grassroots democracy and politics.

Even assuming that some who formally sign an RSVP for a Sanders march on Washington will not ultimately attend, the publicity surge leading into the event would be enormous. The grassroots movement through social media mobilizing Sanders supporters to attend would go mega-viral the minute Sanders agrees to attend, and the likely crowd attending this rally would be far larger than any event for any candidate in either party.

The Sanders presidential campaign, more than any other campaign in either party, has drawn large crowds and huge support from small donors.

If a mega-rally for Sanders at the Mall in Washington does take place the lead-in to the rally would serve as a powerful organizing vehicle for the Sanders campaign. The rally itself would dramatize the sense of community surrounding the Sanders movement, and the aftermath of the rally would lead more local organizers to return to their communities in support of his campaign with a particularly powerful impact in caucus states, including Iowa, and the enterprise from beginning to end would create yet another dramatic surge of small donor contributions to the Sanders campaign.

There are lessons for Hillary Clinton in the social media and grassroots-driven surge for the Sanders campaign that political insiders and the mainstream media continue to vastly underestimate.

Last week I wrote “Hillary vs. Media Malpractice” for The Hill newspaper, a column that was a sister column to a piece I wrote for the Observer, “Hillary Battles the GOP Hate Machine.”

These columns drew a powerful reaction, particularly from women who support Ms. Clinton, who are angrily offended by what they correctly consider unfair attacks against her from the GOP right, which are unfairly megaphoned and exaggerated by the mainstream insider political media.

If the Clinton campaign were to initiate a major small donor moneybomb to fight back against these attacks I predict it would generate a major surge of small donations to the Clinton campaign, for the same reasons I recently wrote that the Bernie Sanders birthday moneybomb on September 8, to celebrate his birthday, will generate a huge surge of small donors for the Sanders campaign.

The Sanders presidential campaign, more than any other campaign in either party, has drawn large crowds and huge support from small donors. The reason is that Mr. Sanders battles against a system that is widely considered corrupt and rigged in favor of those with the most money, and his grassroots supporters mobilize around social media, which is a revolutionary and democratizing influence on American politics and media.

In several columns, I have quoted Jenny Q. Ta, a vanguard social media entrepreneur and founder and CEO of the social Net-WORTHING platform sqeeqee.com, who suggests that social media in the 2016 campaign will be as powerful and transforming as television was during the Kennedy-Nixon debates in 1960.

Ms. Ta is absolutely right. American politics today is at a stage similar to the middle of the Kennedy-Nixon debates, when the debates had already begun but political elites had not yet recognized the power of television in 1960, in the same way and for the same reasons they still do not recognize the power of social media in 2016.

Bernie Sanders is the only candidate in 2016 who has fully embraced and taken advantage of the political and media revolution that remains largely unnoticed and underestimated by insider politicians and the mainstream media.

When we watch television network news, morning shows such as Today and Good Morning America, cable television and Sunday network talk shows, how many supporters of Bernie Sanders appear as panelists? Virtually none. How many experts on social media appear to discuss HOW and WHY the Sanders campaign has so far confounded the experts with large crowds and small donors? Virtually none.

It is no coincidence that the movement for a march on Washington for the Sanders campaign is driven by the theme “enough is enough.”

The widespread public disapproval of American politics and insider politics, and the gravitational pull of consumers away from old media whose ratings and stocks are under pressure, and toward social media, whose “audiences” are growing exponentially, results from the insider and top-down-driven nature of political and media establishments, which are largely one and the same.

It is no coincidence that the movement for a march on Washington for the Sanders campaign is driven by the theme that “enough is enough.” Our democracy is becoming an oligarchy dominated by those with the most money. Our government is becoming a private auction where legislation is sold to the highest bidder of lobbyists dispensing or exploiting the donations of big money donors. The the mainstream media acts like a megaphone for competing factions of insiders in league with competing factions of big money donors, while treating most citizens as political nonpersons who must be forced to choose between options they widely disapprove of.

The explosion of social media politics in 2016 is a reaction to the widespread view that if the political game is fixed, the deck is stacked, and the old media has become the home page for those who fix the game, stack the deck and rig the bid.

The Bernie Sanders crowds are not driven by condescending political insiders who wrongly believe they are a temporary phenomenon that is not important, or by old media elites that barely acknowledge that the crowds even exist for the Sanders campaign. No, their motivation was stirred by the moment when the revolution of social media met the “enough is enough” view of millions.

Those in the old guard of politics and old media who said that many losing campaigns have drawn large crowds were then surprised by the magnitude of small donor support for Mr. Sanders—as they will be surprised again when citizens in Iowa and other states caucus.

The potential power and resonance of a march on Washington by Bernie Sanders supporters, if it materializes, is that it will dramatize and escalate the grassroots uprising that is brewing on behalf of progressive values, progressive causes and the progressive movement.

Like the movement for Occupy Wall Street, which achieved a communications revolution by putting the cause of the 99 percent on the political map of America, which was also fueled by the social media revolution at an earlier stage, a march on Washington by Sanders supporters would further energize grassroots inspiration and action.

A Sanders-for-president march on Washington would take the Occupy Wall Street concept to a whole new level by bringing a large number of people to the same place, at the same time, in the city that houses the White House and Congress, in ways even the mainstream media could no longer disrespect, for a cause that seeks to achieve political power in an organized political campaign designed to take back America and restore a government of, by and for the people.

This democratization of politics would be a great moment for the progressive moment, good for America, healthy for democracy, revitalizing for Democrats, and helpful to whomever Democrats nominate as their candidate for president in a nation ready for true and lasting change. 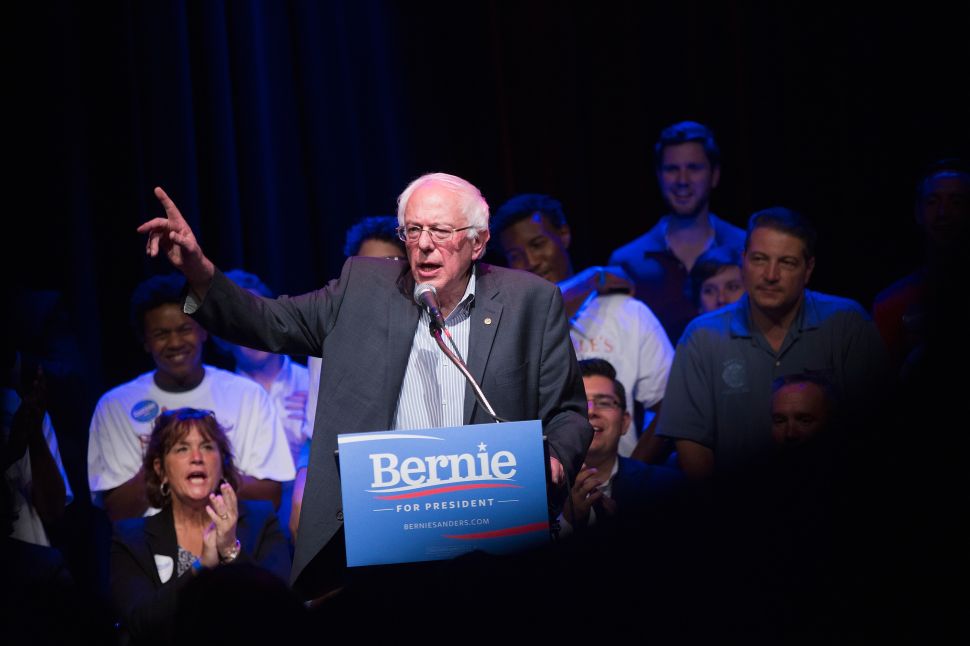