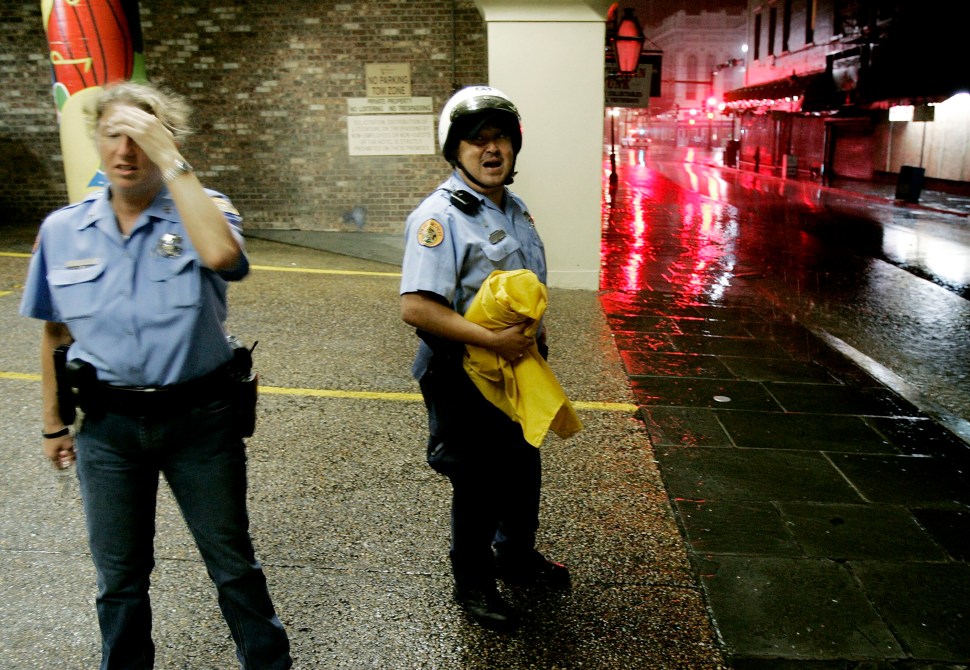 New Orleans Policers look out into an alley in The French Quarter where debris is starting to fly from Hurricane Katrina August 29, 2005 iin, New Orleans Louisiana, Katrina has been down graded to a category 4 storm as it approached New Orleans. (Photo by Mark Wilson/Getty Images)

“Events reflecting shocking breaches of prosecutorial ethics,” “cyber-bullying, and lying to the court,” “compounded by further breaches” by experienced and high-ranking federal prosecutors in the New Orleans United States Attorney’s Office have just caused the Fifth Circuit Court of Appeals to affirm the grant of a new trial for five New Orleans police officers in a scathing decision authored by Judge Edith Jones with Judge Edith Clement.

In the chaos following Hurricane Katrina, New Orleans police officers responded to calls of shots being fired on the Danziger Bridge. When they arrived in the dark of night, they heard shots and returned fire. When the firefight ended, the officers had killed two unarmed citizens and injured four more. The government alleged that the officers made matters worse by engaging in a massive cover-up of their crimes.

The case was plagued with mysterious leaks to the press—all of which favored the prosecution. Commenters on the website for the New Orleans Times Picayune vigorously debated the significance of the case and the guilt of the individual perpetrators and the entire New Orleans Police Department. The jury found the police officers guilty on most counts.

The case began unraveling as a target in another case was able to identify Assistant United States Attorney, Senior Trial Counsel, Sal Perricone as one of the anonymous commenters who was making “inflammatory, highly opinionated, and pro-prosecution” statements about the case and the defendants under multiple assumed names (one of his more colorful aliases was “Henry L. Mencken1951”). As District Judge Kurt Englehardt in New Orleans began pushing the government for answers, and putting lawyers under oath, the prosecution unraveled even more.

It eventually became apparent that First Assistant United States Attorney Jan Mann had lied to the court. She too had been commenting online under an alias. So was DOJ attorney Karla Dobinski. Prosecutors had also threatened defense witnesses with perjury prosecutions to keep them from testifying for the defense, and coerced at least one guilty plea. They “stacked” mountains of charges against the defendants who demanded their right to trial and sought and obtained sentences up to ten times longer against them than for those who “cooperated.”

Judge Englehardt was forced to reverse the convictions of the police officers because of the outrageous misconduct and deceit of these high-ranking prosecutors and the failure and refusal of the Department of Justice to investigate it fully and deal with it. He entered a scathing order, which the Fifth Circuit decision today affirms by a vote of two to one. Judge Edward Prado dissented—not with the description of the egregious misconduct, but with the result.

The Department of Justice finally issued a whitewashed report that did not even address the involvement of a high-ranking Department of Justice attorneys—Karla Dobinski, who Judge Englehardt found also posted comments or Barbara Bernstein—whose remarks to the court were at best “misleading.” Fifth Circuit Judge Edith Jones brilliantly described that report as “a whirlpool cycling toward and gradually reaching its drainage outlet.”

With respect to the prosecution as a whole, Judge Jones, joined by Judge Edith Brown Clement, wrote:

The reasons for granting a new trial are novel and extraordinary. No less than three high-ranking federal prosecutors are known to have been posting online, anonymous comments to newspaper articles about the case throughout its duration. The government makes no attempt to justify the prosecutors’ ethical lapses, which the court described as having created an “online 21st century carnival atmosphere.” Not only that, but the government inadequately investigated and substantially delayed the ferreting out of information about its in-house contributors to the anonymous postings. The district court also found that cooperating defendants called to testify by the government lied, an FBI agent overstepped, defense witnesses were intimidated from testifying, and inexplicably gross sentencing disparities resulted from the government’s plea bargains and charging practices.

Significantly, the Fifth Circuit takes the Department of Justice to task for its failure to “confront[] the incomplete, dilatory, and evasive nature of its efforts to respond to the district court’s inquiries about the full extent of online activity by government employees and the source of the Lohman plea leak.” It applauded the district court for “doggedly pursu[ing] the truth about these matters,” and noted that “to this day the government has never fully answered the district court’s legitimate questions.” Drawing the only conclusions it could from the government’s conduct, the court minced no words. It recognized that “the government is not serious about controlling extracurricular, employment-related online commenting by its officials; the government feared what it might uncover by a thorough and timely investigation; or the government’s investigation was incompetent.”

The Fifth Circuit repeatedly described the events of this case as extraordinary, but to many who have endured prosecutorial misconduct and relentless persecutions, they are not extraordinary at all. Just to name a few examples, recall our story on Friedman’s Jewelers’ CEO Brad Stinn, who’s serving a twelve year sentence for drawing his salary; read my book LICENSED TO LIE: Exposing Corruption in the Department of Justice, and read from JAILER TO JAILED, by former NYPD Commissioner Bernard Kerik. Prosecutorial misconduct is rampant. The tactics that outraged the Fifth Circuit and Judge Englehardt are employed every day and often compel even the innocent to plead guilty.

What is extraordinary is the work of New Orleans federal District Judge Kurt Englehardt who pushed and dug and questioned until he finally got to the truth. Had it not been for his tireless efforts, these prosecutors would have gone unscathed—despite their prolific misconduct and outright lies to the court—and the defendants stood no chance of a fair trial.

Also extraordinary, but long overdue, is that judges are heeding the words of Judge Alex Kozinski and starting “to put a stop to it.” It will take reversals like this to make the point. Anything less is just swept under the large rug in the office of the Attorney General in the Department of “Justice.” 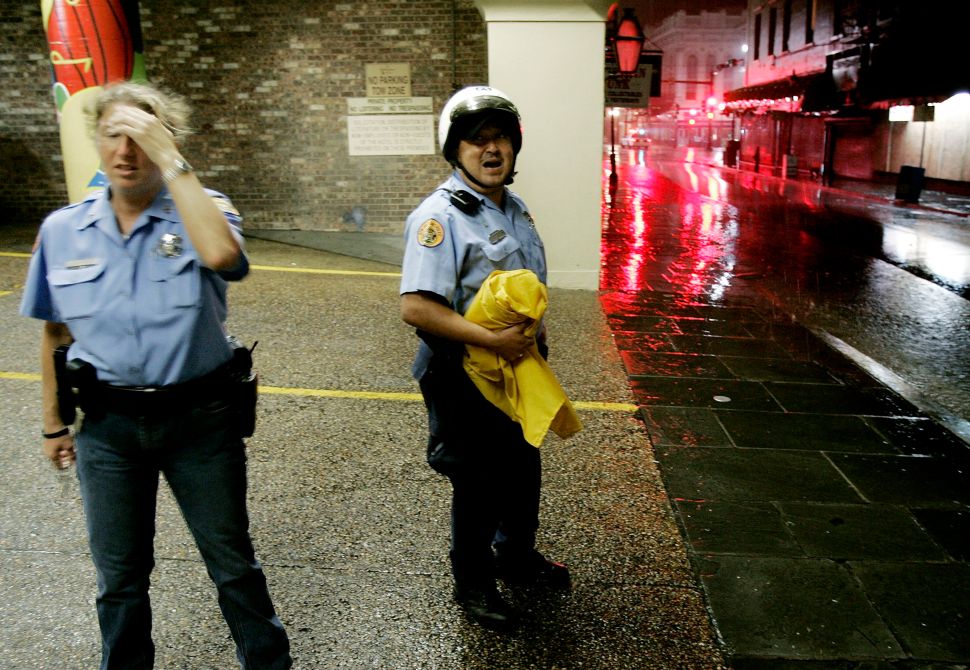