Health officials said today that the ongoing outbreak of Legionnaire’s disease in the South Bronx is unprecedented for New York City—but said the illness poses little risk to most healthy adults and that the number of new cases is likely to decline.

“This is the largest outbreak of Legionnaire’s disease that we are aware of in New York City,” Health Commissioner Dr. Mary Bassett said today during a briefing with Mayor Bill de Blasio at Lincoln Hospital, one of five locations where a cooling tower tested positive for the bacteria, legionella, that causes the flu-like illness.

Seven New Yorkers so far have died of the flu-like Legionnaires’ disease this summer, all linked to the current cluster in the South Bronx and all of whom the mayor’s office has said are “older adults and had additional underlying medical problems. In all, 86 people have reported having Legionnaires’, and 64 have been hospitalized—the larges outbreak in New York since the bacteria was identified in Philadelphia in 1976.

Legionnaires’ disease is a respiratory bacterial infection usually spread through mist that comes from a source, such as cooling towers, air conditioning or showers. The bacteria is not transmitted person to person.

Mr. de Blasio and Dr. Bassett said they believed the outbreak had peaked on July 30 and is now declining. The five cooling towers in the Bronx where legionella was detected—including at Lincoln Hospital where the mayor spoke today—have now been remediated, Mr. de Blasio said, and the city was confident the cluster had begun within one of those towers. But even with the probable source of the bacteria  cleaned up, people could still become ill during the 10-day incubation period of the bacteria.

“In principle, you could still see new cases as much as ten days from today,” Mr. de Blasio said.

People who are older or have underlying medical conditions—like asthma, which is disproportionately common in the Bronx—are more likely to catch and die of Legionnaires’.

“Sadly, this is a disease that does discriminate,” Mr. de Blasio said.

While Mr. de Blasio and Dr. Bassett sought to reassure New Yorkers that most healthy adults were not at risk—and took pains to reiterate that the city’s drinking and bathing was clean—they also repeatedly urged anyone feeling sick with flu-like symptoms, especially older people, to visit the hospital. It’s not the time to listen when a sick older relative says he doesn’t want to go to the doctor, Dr. Bassett said.

“Legionnaires’ disease is very treatable—it’s curable with antibiotics that are readily available in any pharmacy,” Dr. Bassett said.

Since the cluster was identified, the city has tested 17 cooling towers in the South Bronx neighborhoods where the illnesses occurred, with five testing positive for legionella—including Lincoln Hospital. Other buildings included Concourse Plaza, a shopping mall, the Opera House Hotel—where the mayor of San Juan stayed not too long ago—a Verizon building and a Streamline Plastic Co. property, all of which have done remediation work.

“You do not have to let the city know that you have one of these units,” Mr. de Blasio said of the current laws.

Today Mr. de Blasio said he would seek to change that, asking the City Council to introduce legislation that would require property owners to register their cooling towers and have them inspected. If property owners do not allow inspections they could be sanctioned; if they do not remediate a tower if legionella is found, the city would intercede to do it and charge the property owner.

Mr. de Blasio has offered several briefings on the illness with his health commissioner, Dr. Bassett—harkening back to last fall when the mayor repeatedly provided updates on a single case of Ebola in the city that resulted in no fatalities but plenty of public interest and concern.

The illness is named for members of the American Legion, Legionnaires, who became ill with the bacteria when it first appeared in 1976 during a meeting of the civic group in Philadelphia. 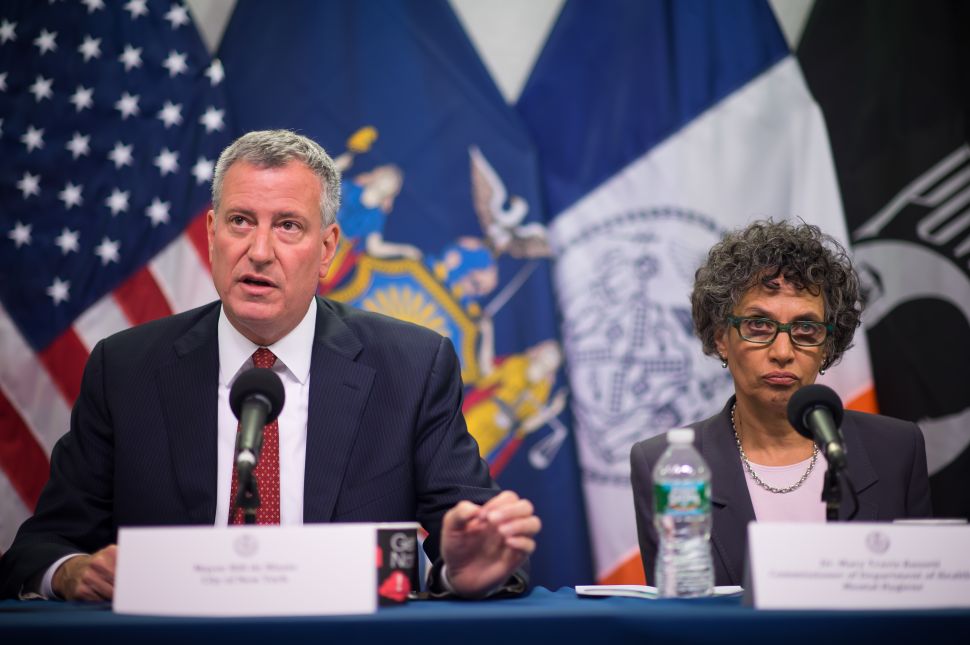