“Our children deserve to live, our adults deserve to live. All lives matter,” Mr. Adams, a former state senator and a police officer, declared. “The temperature rise cannot cause a rise in gun violence.”

Three people died and 16 others were wounded in shootings across the city this weekend. In one shocking incident, nine people were shot and wounded at a backyard party in East New York, Brooklyn. While conservatives faulted Mayor Bill de Blasio and the liberal City Council for the shooting spike, pointing to the drastic reduction in stop-and-frisks (which began under a stop-and-frisk proponent, former Mayor Michael Bloomberg), Mr. Adams and Mr. Williams said the two were not related.

Rather, the Democratic politicians and activists said more gun control, along with increased community resources, are needed to curtail shootings. Mr. Adams called on the State Legislature to restore funding for Operation SNUG, a program that provides former gang members with jobs mentoring adolescents in troubled areas.

Earlier today, the de Blasio administration told reporters that year-to-date figures for shootings are almost identical, despite the bad headlines. On August 2 of last year, there were 674 shooting incidents and 787 victims, compared to 669 incidents and 794 victims this year.

Mr. Adams told the Observer he did not have specific organizations in mind for the emergency $10 million and did not say how he arrived at that figure. Activists from the groups Wheelchairs Against Guns, Man Up!, Lay the Guns Down Campaign, and New Yorkers Against Gun Violence all spoke after the Brooklyn borough president, and he implied all would be worthy of additional support.

“The process of how the money is disseminated, we will leave it up to the criteria and the methodologies that the city carries out,” he said. He added that he reached out to City Hall and the City Council about the funding, and has not heard back from Mr. de Blasio.

Karen Hinton, a de Blasio spokeswoman, said he and the City Council had allocated about $18 million already to groups in 17 neighborhoods, primarily in Brooklyn and the Bronx, that drive 51 percent of shootings. “These groups have just started receiving the dollars to fund their programs, and we are confident we will start to see more reductions. In fact, crime stats clearly show that the number of shootings is going down, not up,” she said.

Mr. Williams, a forceful advocate for police reform, called gun violence an “epidemic” and “pandemic” but chastised media organizations, particularly the more right-leaning tabloids, for “driving a wedge” between minority communities and telling the public they want the stop-and-frisk era to return.

Tony Herbert, an East New York activist and former candidate for local office, said politicians could be blamed, however.

“We can hold our elected officials accountable. At the end of the day, when they take that oath, they get those paychecks, they go to the those functions and those dinners and say they are representing our community–then hell, represent our community,” he said. “We need individuals like this to stand up. Maybe Eric [Adams] should be the mayor.”

The emotional press conference was interrupted several times for different reasons. A woman shouted at Mr. Adams about deaths in the foster care system. A man yelled out that cops who have been killed should also be recognized.

As Mr. Williams spoke, another woman leaped between the podium and television cameras, crying out “somebody, please help me!” She said she and her autistic son were being thrown out of their New York City Housing Authority apartment. After repeatedly shouting and even showing her son’s bedbug bites to the cameras, she was escorted away by security. 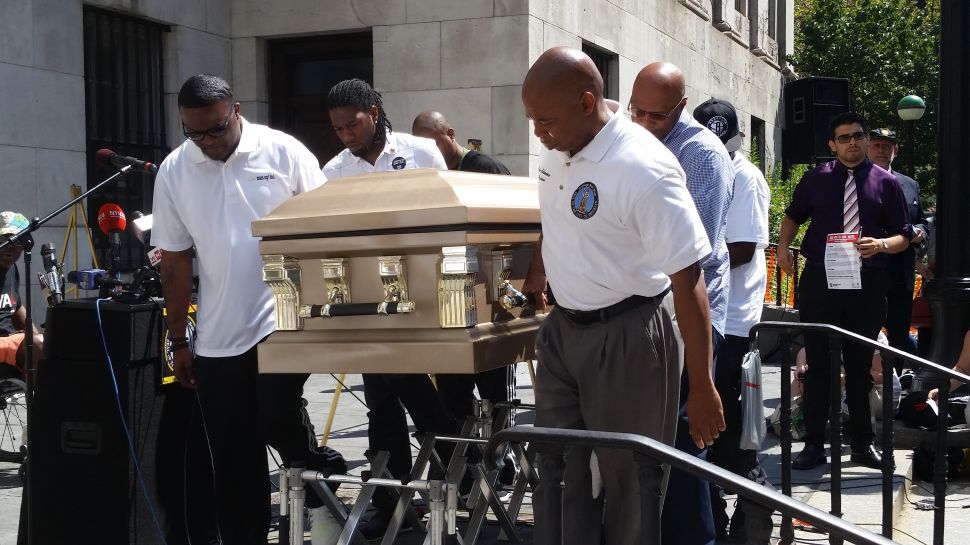