America is heading for war with Russia. Some call the current situation  “an increase of hostility” or “Cold War II.” There are two sides to this story. I believe that American journalists from all political persuasions are not offering critical analysis. Understanding the Russian side and taking their arguments seriously can help prevent serious consequences.

Americans believe that Russians are fed propaganda by the state-controlled media. If Russians only could hear the truth, the thinking goes, they would welcome the US position. This is not so. There are more than 300 TV stations available in Moscow. Only 6 are state-controlled. The truth is that Russians prefer hearing the news from the state rather than the Internet or other sources. This is different from almost any other country. It is not North Korea where the news is censored. Each night during the Crimea crisis, anyone could watch CNN or the BBC bash Russia.

With regard to Ukraine, Russia has drawn a red line: It will never allow Ukraine to be part of NATO. Russia sees the US as the aggressor, surrounding Russia with military bases in Eastern Europe at every opportunity since the collapse of the Soviet Union. The US sees Russia as the aggressor against its neighbors. A small misstep could lead to war. This time the war will not be “over there.” The Russian bombers flying off the California coast on July 4th clearly demonstrate this point. Russians understand that the US has not fought a war on its soil since the civil war. If new hostilities start, Russia will not let the war be a proxy war where the US supplies weapons and advisors and lets others do the “boots on the ground” combat. Russia will take the war to the US. How did we reach this critical point in such a short time?

Russia sees the US as the aggressor, surrounding Russia with military bases in Eastern Europe at every opportunity since the collapse of the Soviet Union. The US sees Russia as the aggressor against its neighbors.

First, some background. I moved to Moscow two and a half years ago. I went to Russia to build a non-government funded news channel with editorial views consistent with the Russian Orthodox Church. I have completed that task and returned to the west. I see both sides of this escalating conflict and unless there is a change in thinking, the result will be catastrophic. When I first arrived, the relationship between the US and Russia seemed normal. As an American, my ideas were welcomed, even sought after. At the time, Mr. Obama planned to attack Assad’s army in Syria for crossing the “red line” for a chemical weapon attack.  Russia intervened and persuaded Syria to destroy its chemical weapons. Mr. Putin had helped Mr. Obama save face and not make a major blunder in Syria. Shortly after, Mr. Putin wrote an editorial published in the New York Times, which was generally well-received. Relations appeared to be on the right course. There was cooperation in the Middle East and Russia phobia was easing.

Then Russia passed a law that prevented sexual propaganda to minors. This was the start of tensions. The LGBT lobby in the West saw this law as anti-gay. I did not. The law was a direct copy of English law and was intended to prevent pedophilia, not consenting relationships between adults. Gay relations in Russia are not illegal (although not accepted by the majority of the public). Regarding gay protests, they were restricted from view of children. I saw this in the same way that we in America restrict children from seeing  “R” rated films. The punishment for breaking this law is a fine of less than $100. Double-parking a car in Moscow carries a heavier fine of $150. Nonetheless the reaction was overwhelming against Russia.

The boycott of the Sochi Olympics was the West’s way of discrediting Russia. Russia saw this boycott as an aggressive act by the West to interfere with its internal politics and to embarrass Russia. Sochi was for Russians a great source of national pride and had nothing to do with politics. For the West, this was the first step in creating the narrative that Russia was the old repressive Soviet Union and Russia must be stopped.

Then came the color revolution in the Ukraine. When the president of Ukraine was overthrown, from a Russian viewpoint this was a Western organized coup. The overthrow of a democratically elected president signaled that the West was interested in an expansion of power, not democratic values. The leaked recorded conversations of Assistant Secretary of State Victoria Nuland and US Ambassador Geoffrey Pyatt suggested that the US was actively involved in regime change in the Ukraine. For Russia, the Ukrainians are their brothers, much more than any other group. The languages are similar; they are linked culturally and religiously. Kiev played a central role in the Christianization of Russia. Many Russians have family members in Ukraine. For Russians, this special relationship was destroyed by outside forces. Imagine if Canada suddenly aligned itself with Russia or China. The US would surely see that as a threat on its border and act decisively.

When the Soviet Union collapsed, from an American viewpoint, the borders of Eastern Europe were frozen. However in the late 1990s, the borders of Yugoslavia changed, breaking that country apart. Russians had accepted Kiev’s rule of Crimea since 1954 as a trusted brother might watch a family property. But when that brother no longer is a part of the family, Russia wanted Crimea back. Crimea also wanted Russia back. Crimeans speak Russian and are closely tied to their 300-year Russian heritage. From the Russian point of view, this was a family matter and of no concern to the West, The sanctions imposed were seen as aggression by the West to keep Russia in its place.

Sanctions are driving Russia away from the West and toward China. Chinese tourism in Russia is at record levels. More transactions are now settled directly between Rubles and Yuan, with the US dollar’s role as middleman being limited. Although the dollar remains strong now, this is deceptive. China has created the AIIB bank to directly compete against the IMF for world banking power and the US is having trouble preventing its allies from joining. This is the first crack in US financial domination as a direct result of sanctions.

We are moving closer and closer to a real war. Republicans and Democrats talk tough on foreign policy towards Russia. When all politicians are in agreement, there is no discussion of alternative approaches. Any alternative to complete isolation of Russia and a NATO build up on Russia’s borders is a sign of weakness. Any alternative to this military build up is criticized as “appeasement,” likened to the failed foreign policy of British Prime Minister Neville Chamberlain toward Nazi Germany between 1937 and 1939.

Liberal Democrats historically are anti-war, but not this time. In the Czech Republic, there was the start of an anti-war movement when NATO paraded its military along its borders. “Tanks but no thanks” became a rallying cry. Czechs became uncomfortable with a muscle flexing approach to the standoff. Only a lone libertarian, Ron Paul raises a critique of the wisdom of this military build up.

The mistake that will cost America dearly is the assumption that Russia has the same ambitions as the Soviet Union. The cold war strategy used against the Soviet Union cannot be repeated with the same result. The Soviet Union was communist and atheistic. Modern Russia has returned to its Christian roots. There is a revival in Russian Orthodoxy with over 25,000 new churches built in Russia after the fall of Communism. On any Sunday, the churches are packed. Over 70% of the population identifies themselves as Orthodox Christians. Combine this religious revival with renewed Nationalism and Russia is growing in self-confidence.

A war with Russia cannot be won economically. Russia has oil and an abundance of natural resources. It occupies the largest landmass in the world.

The Marxist ideology followed by the Soviet Union was evangelistic. Only when the whole world became communist will Marxist principles be realized. When collective farms missed their goals, it was because the whole world wasn’t communist yet, not because the ideology destroyed individual initiative. For this reason, the Soviet Union needed to dominate the whole world. For modern Russia, world domination is not its goal. Russia wants to keep its Russian identity and not lose it to outside forces.

Russian history is filled with invaders trying to conquer Russia. Napoléon and Hitler are only the latest examples. Russia has always prevailed. Driving in from the airport, you can see exactly how close Hitler came to Moscow. You are also reminded that it was here that he was stopped. Russia is sure that they will repel the newest invader NATO.

A war with Russia cannot be won economically. Russia has oil and an abundance of natural resources. It occupies the largest landmass in the world. It is growing in its ability to replace goods restricted from the west. A proxy war using the Ukrainian army will not solve the problem.

There is still time to make a deal. More sanctions, and more isolation from the West are not the way to resolve differences. The US flexing its military muscle will not solve the problems. War is not the answer but too often in history becomes the only solution when two sides refuse to see the other’s point of view.

Jack Hanick recently completed the development of a state of the art television network in Moscow, built without government funding. Its evening news program broadcasts to 65 million homes in Russia across eight time zones. Previously Jack was a TV director, where he won the New York Emmy in 1994 for best director. His biography of Desmond Tutu also won a New York Emmy. Currently Jack is Chairman of the Board of HellasNet, a group of TV stations in Greece. 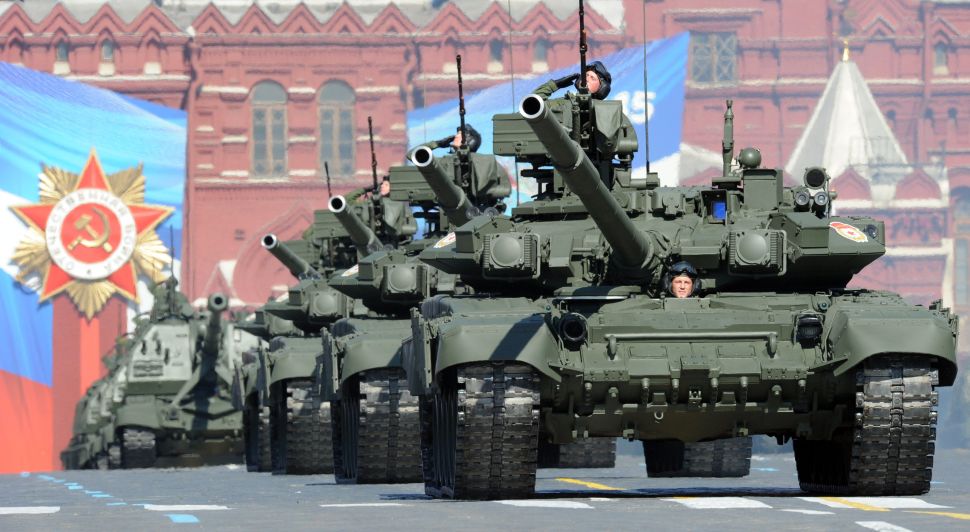