Based on our recent visit to St. Tropez, Chanel has become more a symbol of France than the béret. Golden-tanned Bardots wearing short shorts and Chanel everything zip around the cobblestone streets on mopeds as only carefree Europeans can.

Everywhere are Chanel sunglasses, Chanel flats, and, of course, a doggie sporting a Chanel collar. Sur la plage, Coco would be proud of the number of interlocking C’s, displayed as they are with the national fervor of the Tricolore.

If the Eiffel Tower is the hallmark of a tourist trip to Paris, La Maison de Chanel these days is the heart and center of bustling St. Tropez. Shopping there is akin to having a margherita pizza in Naples or pad Thai in Bangkok.

The store sits astride the most prime location on L’Avenue General Leclerc, functioning as an unofficial embassy where one’s passport is the American Express black card. Surrounding the leather goods is a hushed sense of seriousness and authenticity.

I was doing a little shopping in Lanvin for Dana, when afterwards I ventured toward what I now call La Musée de Chanel, with its imposing façade, elegant green European shutters, gravel and topiaries more befitting an aristocratic summer residence than a retail store. The mansion is one of the most authentic French luxury experiences, with a grandeur and modernity only seen in institutions like the Louvre, where juxtaposition of architectural styles and centuries creates a fabulous frisson.

It was no surprise then, a few days later, when Best Man—he and Second Wife were staying at the Grand Hotel Quisisana with us—asked if I had seen an article about Greeks converting their cash into Chanel bags for safety. That made sense for a country in a state of dire financial upheaval, but how about for the rest of us?

I put the question to NY HedgeFUNder—he and his wife are one of the few New York financial couples with a sense of humor—whom we ran into on our way down to the Fontelina beach club via the Punta Tragara.

As we took the winding path of old Roman steps we looked at the stunning array of mega-yachts in the distance.

“I like the one that has the helicopter on it,” I said, the view so dazzling the vessel looked like a toy boat in an aqua bathtub.

I mentioned a New York Times article about a jeweler in Greece who turned down $1 million for his stock of diamonds. He thought the hard goods trumped cash.

“As a financial person, does this make sense to you?” I asked as I noticed a 10-story slide attached to one yacht.

“Sadly, it actually does,” he said thoughtfully. “It’s all about devaluation. From what I have heard, if the Greeks decide to leave the euro and convert to drachmas, then their currency could be devalued by as much as two-thirds.”

‘Let’s say a woman is getting a divorce,’ Second Wife said. ‘A Channy bag or a Birkin is definitely on the list of things she can sell. I have plenty of friends who go on a shopping spree at Hermès before the big split happens.’

“What does that mean for someone like me who flunked math?” I asked.

“Lets say you have a diamond worth $1 million in euros. If the Greeks leave the euro and convert to the drachma, from what I am hearing, the drachma will be worth one-third of the euro. Which means that if you want to buy a million-euro diamond, after the conversion you will have to pay the equivalent of 3 million drachmas in euros.”

“So what you’re saying is it’s better to hang onto hard assets or they will cost more in the end?” I asked.

“Correct,” he said, as we made our way down to the beach club. “Why not buy a Chanel or Hermès bag, which has lost no value at all?” he added, as a woman in Chanel slid by.

“Do you think there will ever be a time when people are trading Birkins like currency?” I asked.

“Stranger things have happened. Take a look at the auction houses. I am used to seeing a Warhol or a Picasso, but now some of the auctions are selling your mother’s Hermès.”

“I just read about an Hermès bag that was sold at a Hong Kong auction for $220,000—the highest price ever,” I said, as I point to a 300-footer with a snazzy Wally boat trailing it.

He looked at the yacht and then at me. “Maybe I need to reconsider what I’m investing in,” he said.

The open-air garden at Villa Verde is bursting with energy, accommodating the vacationing Americans, South Africans and well-preserved and well-dressed Neapolitans. Since it is a Saturday night and the ferry from Naples makes Capri an easy dinner destination, there is an overflow of tanned skin, South Sea pearls, and bread plate-sized Panerais on display. Dana and I usually eschew big dinners but this evening it’s a round table for 10. Luckily, I get to sit between Dana and the woman I affectionately call Second Wife.

“That’s a cool bag,” I said, spying her gold lamé and fringe clutch of indeterminate brand. With or without labels, Second Wife always is of the moment with her cool, boho, luxury sensibility.

“Yes, I bought it in Amsterdam,” she said.

The topic turned to the article about people in Greece converting cash into Chanel bags. “What’s your POV?” I asked.

“Look,” she said, “let’s say a woman is getting a divorce; a Channy bag or a Birkin is definitely on the list of things she can sell. I have plenty of friends who go on a shopping spree at Hermès before the big split happens. You know the croc ones are big money.”

“Do the husbands know this is going on?” I asked as I inhaled a fried zucchini flower.

“Clearly not,” she said in a barely audible, secretive tone. “It’s the greatest scam in the history of divorce.”

Speaking of luxury goods, L’Actrice and the Silver Fox had choppered in from Roma and made their glamorous entrance on the Quisisana terrace in a blaze of old-school paparazzi flashbulbs.

L’Actrice, one of the few women in New York to have a duplex closet, was resplendent in black lace Dior couture and diamonds.

“Do you think I’m overdressed?” she asked, her gems illuminated by the flashing cameras.

“The Italians more than anyone appreciate la bella figura and we’ll just get better placement for dinner,” I explained. After all, the Sophias—my word for chic Italian women of the Dolce Vita generation—often rock a robin’s egg-sized emerald or Buccellati cuff for a little extra attenzione.

‘Take a look at the auction houses,’ said a friend I call NY HedgeFUNder. ‘I am used to seeing a Warhol or a Picasso, but now some of the auctions are selling your mother’s Hermès.’

Lemon risotto on the terrace of Faraglioni is Capri perfection, and the people-watching cannot be beat. Costanza, our favorite waiter, is always turned out beautifully in a white dinner jacket and immaculate bow tie.

The topic turned to L’Actrice’s habit of reselling bags to consignment stores. “In my experience, they generally want Hermès, Chanel and Dior. Those are the brands that resell,” she explained.

“Are you more predisposed to buy them as a result?” I asked.

“I would have to say yes, though an investment is something worth more money after you buy it and that’s not true of fashion. Even if I get 10 to 30 percent of what I’ve spent after I’ve worn it, it’s still money in the bank.”

“And goes towards the next purchase,” the Silver Fox groused lightheartedly.

“The resale thing is much easier to do it in L.A.,” she remarked. “If someone is buying secondhand they want to see all the original sacks, boxes and receipts and identification card. A collector friend in L.A. has an entire room devoted to the boxes.”

“Would you ever buy Chanel or Hermès from a resale site?” I asked.

There is still a Re Di Capri and his name isn’t Tiberius, it’s Roberto Russo, arguably Capri’s most stylish resident and owner of a veritable retail fashion conglomerate, the crown jewel being the leading men’s store: Russo Uomo.

Even though it was well over 100 degrees, Il Re was attired in a navy blazer with a perfectly starched shirt and pocket square, wearing the short peg leg jeans in favor with chic Italian men. He bestowed a double kiss and an honest appraisal of my clothing.

“I think your blazer is a bit long, no?” he sniffed. “Perhaps we can tailor the jeans and I can make you a new pair with the leftover material.”

“O.K. It’s obvious I need a Capri Makeover and I’m in the right place.”

I told him I was doing a new article on luxury goods as currency. “And since you own most of the luxury shops in Capri I would love your opinion,” I said.

We stepped out on the terrace.

“You know the Italians care a great deal about style. I think for a man, a good suit is an investment in his wardrobe and how he presents. I don’t look at things in terms of resale. And Italy is not Greece.” Mid-conversation, Il Re double-kissed a few Americans who walked over to pay homage.

“So what would you say to those who are buying and selling Birkins?”

“Look,” he said in a musical tone, “when Jackie Onassis used to come to Capri, she wore capri pants, sandals and the big glasses and a T-shirt. Not a lot of gold or the fancy bag. But she had the inner confidence and she was beautiful. She loved herself and it showed. The biggest investment you can make is to love yourself and then you present well.”

“E tu, Richard.” He smiled as we embraced, and his lead sales girl tallied up the new jeans, blazer, shoes, belts and other purchases and presented them to me like well-wrapped confections.

I opened my Louis Vuitton wallet and paid the bill. 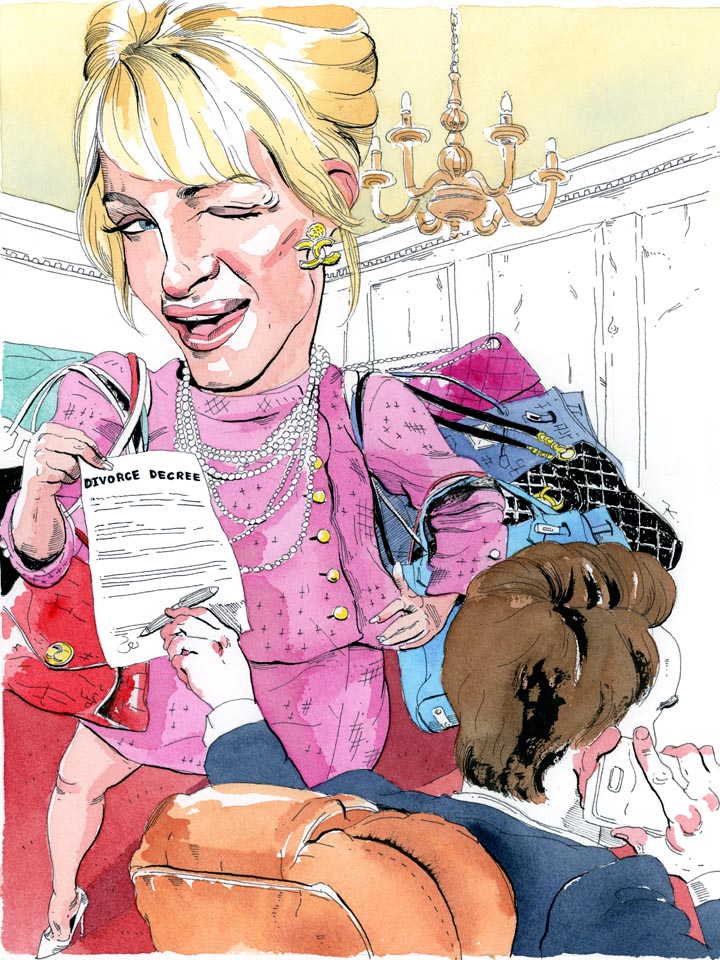