As new, ultra-luxurious Manhattan real estate developments continue to dominate the headlines, it can easy to forget that many homeowners in the city are still struggling with the fallout of the housing market crash—mired in the ongoing foreclosure crisis that has, of late,  worsened statewide, despite the economic recovery.

In Southeast Queens, the problem is particularly pronounced, with 10,000 homes currently in foreclosure, or one out of every 79—the highest percentage in the city—a problem that has been made largely intractable by banks’ unwillingness to abide by federally-mandated loan modification laws, according to Councilmember Rory I. Lancman, who held a press conference with fellow councilmembers Dan Garodnick and I. Daneek Miller Wednesday afternoon outside the Queens Supreme Civil Courthouse.

“Banks, as we know, played a very substantial role in creating the subprime mortgage crisis,” Mr. Lancman said. “New York state in particular and Queens in particular particular were the ground zero for subprime lending practices.”

Mr. Lancman said that banks frequently delay foreclosure conferences to modify homeowners’ loans or show up unprepared; banks are required by law to hold such conferences within 60 days of foreclosures proceedings as part of the federal Home Affordable Modification Program, which requires banks and mortgage servicers to provide eligible homeowners with loan modifications to adjust the monthly payments to an affordable amount.

But as The New York Times recently reported, banks have rejected 72 percent of applicants, or four million borrowers, nationally, a pattern that has been reflected in Queens, legislators say.

“Eighty percent of these banks are not prepared to negotiate in good faith at these conferences, they don’t have the documents… they have turned these conferences into a sham,” Mr. Lancman said, citing the case of one Queens homeowner who had to fill out the application for modification 8 different times, submit bank statements 14 times and verify their income 15 times.

The banks’ unwillingness to comply with the law has made it nearly impossible for homeowners to receive modifications without the help of legal counsel, he added, and the city spends $1.75 million each year specifically on legal services to prevent foreclosure; another $5.4 million goes to other housing legal aid, which includes foreclosure cases.

Foreclosures, moreover, continue to clog the state’s civil court system, according to Jacob Inwald, the director of foreclosure prevention at Legal Services NYC, accounting for more than a third of all civil cases.

“We’re standing here with a very clear message to banks—stop wasting our time,” councilmember Dan Garodnick said. “The recession may be over, but we’ve seen foreclosures continue to spike in New York City, especially in Southeast Queens.”

Loan modification, he emphasized, was not a gesture, but banks’ responsibility.

Councilmembers admitted, however, that as banks are already required by law to offer loan modifications, there is little at the moment that can be done to make them do so—though that could be changed via additional legislation. And, Mr. Landsman added, “one of the things we can do is support the state and federal government into shaming the banks… and I am not the least bit reluctant to leverage the city’s power with the banks to compel them to be good corporate citizens.” 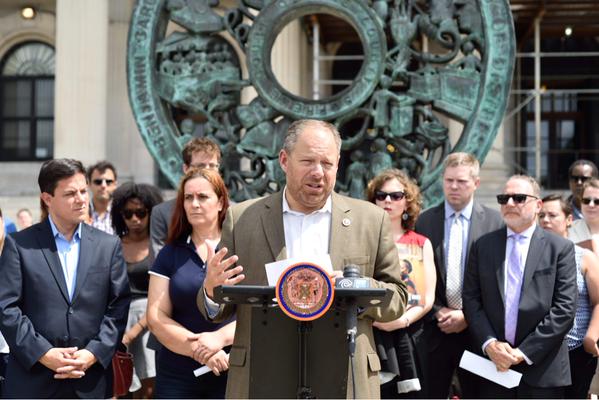