President Obama’s Iran deal is a direct threat to the survival of Israel, in the opinion of nearly 80 percent of Israelis, who believe it will lead to a nuclear Iran. Furthermore, there is a consensus across the Israeli political spectrum, which usually can’t agree on anything.

So I take note when a Jewish Congressman from New York like Jerrold Nadler votes in favor of the deal after getting some personal love from President Obama.

Jerry Nadler has the largest Jewish constituency in the United States. In the six-and-a-half years he’s been in Congress he has never been invited to a personal meeting with President Obama. In fact, Mr. Nadler became something of a pariah in the Obama White House when, days before the 2008 general election, Mr. Nadler was caught on an open mic telling Jewish voters in Florida that Mr. Obama lacked the “political courage” to leave Rev. Wright’s church. But suddenly, with the president convinced that a deal with Iran is critical to his legacy, Mr. Nadler is being showered with love. President Obama lobbied him hard. Personal meetings. Personal letters that were strangely released to the public. And what do you know? It worked. Nadler got weak at the knees and came out in favor of the deal. Had Nadler agreed to vote against it, then the entire Democratic Jewish Congressional delegation in New York would have voted against it as a bloc. He is the only one to break ranks.

But Jerry insists that his vote had nothing to do with getting presidential attention. Rather, to defend his support of the deal, Nadler put out – get this – a 5,000-word manifesto.

Methinks he defendeth too much.

What Mr. Nadler omits in his 5,000 words is just how dangerous Iran truly is. Iran is the foremost sponsor of global terror, with its tentacles spreading from the Middle East to Europe, Africa and South America.

And Mr. Nadler must have been working those phones pretty hard. Shortly after his announcement, Jewish political activists like Ezra Friedlander were already publishing defenses of Mr. Nadler on Orthodox Jewish websites like Yeshiva World News. When it comes to lobbying it seems that retaining access is indeed everything.

Mr. Nadler’s manifesto is riddled with ridiculous statements like this one: “International sanctions will be suspended only after Iran’s compliance with these required steps, a process that is likely to take 6–9 months.” Perhaps Jerry missed the story about Russia already selling long-range missiles to Iran this week, or how half the foreign ministers of Europe have already traveled to Tehran to do business.

Mr. Nadler goes on to say, “This agreement is not built on trust. It is built on inspections and monitoring to verify compliance, and to detect any violations or cheating. While criticisms have been made of the monitoring and inspection provisions, they are more thorough and intrusive than in any previous agreement.”

I guess he missed the IAEA secret memorandum, finally leaked last week, that allows Iran to self-monitor its Parchin installation, or the fact that Iran has 24 days to delay inspectors at its other sites. As for his words that these inspections are more intrusive than any previous agreement, I assume he’s referring to the extremely effective agreement negotiated with North Korea by the very same Wendy Sherman.

Mr. Nadler throws around general statements like, “The terms of the agreement prohibit the Iranians from ever developing, or attempting to develop, a nuclear bomb,” when he knows full well that sunset clauses in the agreement after 10-15 years make a mockery of his claim.

What Nadler omits in his 5000 words is just how dangerous Iran truly is. Iran is the foremost sponsor of global terror, with its tentacles spreading from the Middle East to Europe, Africa and South America.

The United States (“The Big Satan”) and Israel (“The Little Satan”) are the primary targets of Iran’s wrath. The United States is reviled for its role in supporting the Shah’s rule prior to the revolution, its decadent values that lead Muslims astray, its criticism of Iran’s abuse of human rights, and its deep political, military and economic involvement in the region.

As the Jewish State, Israel is viewed as a cancer in the body of Islam that must be excised. Jews have no place in the Islamic heartland, except as dhimmis (second-class citizens) and the idea that they should rule over Muslims is intolerable. Iran has resorted to crass anti-Semitism, including sponsoring conferences denying the Holocaust, and Iran’s leaders have repeatedly promised to annihilate Israel.

Could Mr. Nadler not have at least demanded that President Obama publicly condemn Iran’s promised holocaust before the deal goes ahead?

The consequences of Iran obtaining a nuclear bomb are catastrophic – for Israel, the Middle East, and the entire freedom-loving world.

One of the main components of Iran’s foreign policy is the use of terror to advance its interests, funding killers like Hezbollah that target men, women, and children, blowing them up, shooting them, in the most public, horrific way.

Iran is also one of the principal sponsors of the regime of Bashar Assad that has already killed more than 200,000 innocent Arabs.

Iran also serves as one of the major backers of the terrorist group Hamas, providing funding and advanced rockets and other weapons that have been used against Israel.

The State Department describes the current situation of unrest in the Middle East as follows: Iran “arms militants, including Hamas, Hezbollah and Palestinian Islamic Jihad, and continues to play a disruptive role in sustaining violence in the region, particularly Syria.”

Iran’s tyranny is not limited to areas outside its borders. Blaspheming the prophet, homosexuality and adultery (in some instances, even if possible rape was involved) can be punished by death. Thousands of political prisoners have been arrested, tortured, raped and executed over the years.

The consequences of Iran obtaining a nuclear bomb are catastrophic – for Israel, the Middle East, and the entire freedom-loving world. Israel would be under existential threat from a nuclear strike and the mere warning of such a response could deter Israel from taking measures against Hamas, Hezbollah, and Islamic Jihad. Worse yet, is the possibility that Iran could give one or more of these groups a bomb.

The international community reached a rare consensus that Iran should not be allowed to have nuclear weapons and the UN Security Council enacted a series of resolutions imposing sanctions on Iran, which were supplemented by additional restrictions by the US and its European allies. The goal was to persuade Iran to cease all its research on nuclear weapons and enrichment of uranium that could be used to produce them. These sanctions have been very effective at weakening Iran’s economy.

Now, President Obama has negotiated a weak deal which surrenders to Iran their entire nuclear infrastructure which is allowed to remain intact, albeit with modifications.

Congressman Nadler capitulated to the President’s charm offensive, and that’s a shame. But he must not be allowed to misrepresent just how porous the deal actually is.

Rabbi Shmuley Boteach is the international best-selling author of 30 books, winner of The London Times Preacher of the Year Competition, and recipient of the American Jewish Press Association’s Highest Award for Excellence in Commentary. He served for 13 years as Rabbi to the Jewish students of Oxford University. He will shortly publish “The Israel Warrior’s Handbook.” Follow him on Twitter @RabbiShmuley. 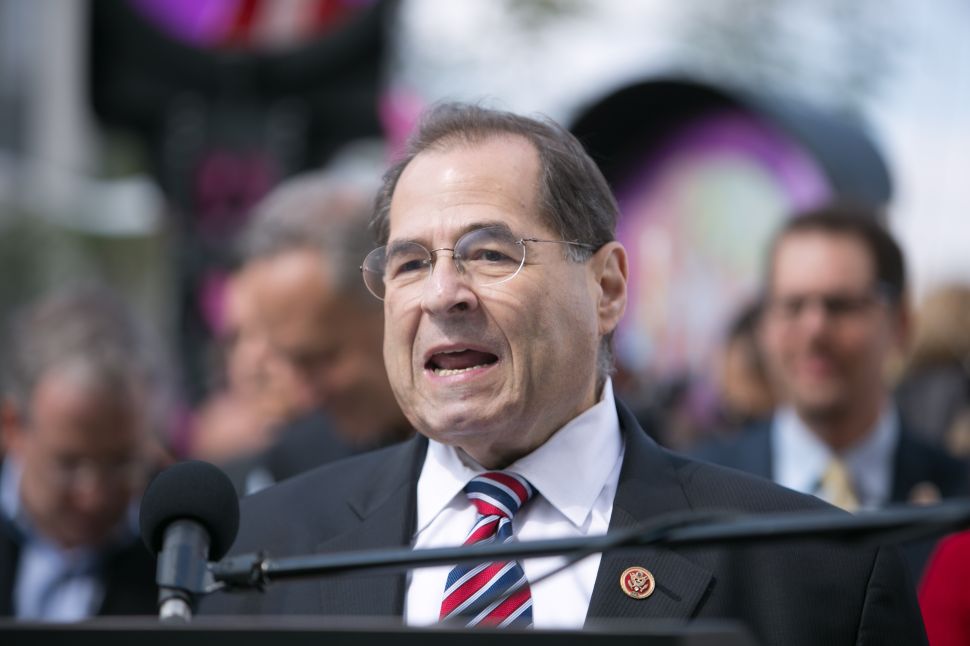