Mayor Bill de Blasio is considering a controversial idea to tackle the controversial issue of bare breasts in Times Square—opening up the area’s pedestrian plaza to car traffic again.

The mayor—who has launched a task force headed by Police Commissioner Bill Bratton and City Planning Commissioner Carl Weisbrod to determine how to ban body-paint-wearing ladies and costume characters from soliciting cash—said he was open to ending pedestrian plazas in the busy district. It’s an idea floated by Mr. Bratton, who believes it could make it more difficult for the “entertainers” to ply their trades.

“Commissioner Bratton and I have talked about that option. That will be considered by the task force,” Mr. de Blasio said during an unrelated press conference in the Rockaways. “Now, that’s a big endeavor and like every option, the option comes with pros and cons. So we’re going to argue about what those pros and cons would be.”

The pedestrian plaza was created under former Mayor Michael Bloomberg, and Mr. Bloomberg—who wasn’t sure about the idea when it was first pitched to him—credited it with reducing pollution, making streets safer for pedestrians, and for encouraging more commerce, according to an ironically titled WNYC article about how the plazas were there to stay when Mr. Bloomberg departed in 2013.

The woman—sometimes dubbed desnudas in Spanish—have come into the political spotlight after the Daily News has put the painted ladies on the cover of its newspaper several days in a row. But it’s unclear whether the idea of turning pedestrian plazas back into streets as a solution will have much support from other politicians.

“The City Council is considering its legislative options but the Speaker believes in and supports keeping pedestrian plazas,” Eric Koch, a spokesman for Council Speaker Melissa Mark-Viverito said.

Comptroller Scott Stringer, who backed the plazas as Manhattan borough president, said shutting them would be a “serious overreaction.”

“The introduction of the pedestrian plazas has been a positive change to the urban landscape, giving Times Square much-needed open space and improving pedestrian safety,” Mr. Stringer said in a statement. “To shut it down would be a serious overreaction to what is essentially a quality of life enforcement issue.”

Councilman Dan Garodnick, who represents half of Times Square, struck a similar tone.

“The Times Square plazas have provided a safe haven for pedestrians who previously had to navigate very narrow and overcrowded sidewalks right next to fast traffic,” he said. “Let’s not throw the baby out with the bathwater here.”

The task force will also be considering other options for regulating the photos-for-tips operations that have become endemic to the tourist hotspot, including new laws—as the mayor believes no laws are currently being broken. It is not a crime to panhandle in New York City, nor is it illegal for women to go bare-chested. But Mr. de Blasio argued that what’s happening in Times Square is a clearly planned business enterprise, which ought to be open to regulation like other businesses.

“The current activity is not per se against the law, but if we add additional laws that address the obvious business nature of what’s going on… it will allow us the possibility of and the ability to very aggressively enforce those laws,” Mr. de Blasio said.

Elected officials, perhaps sensitive of the gender dynamics at play—after all, the male Naked Cowboy has worked shirtless in Times Square for years without much pushback—have repeatedly tried to tie the issue less to nudity and more to aggressive panhandling.

“Per se why would a costume character be a concern?” Mr. de Blasio asked today. “It was because of the aggressive approach those characters took to get people to give them money… We see the same thing with the painted women. It’s the exact same reality. That’s my core problem.”

But the mayor, a progressive Democrat, went on to say that in his judgement, it was not appropriate for women to be “display themselves that way.”

“I also would say as a human being and a parent, I don’t think it’s appropriate, in the middle of one of one of the busiest squares in New York City, that women should display themselves that way,” Mr. de Blasio said. “They have a constitutional right. It’s not my choice.”

That judgement might make Mr. de Blasio sound a bit more like former Mayor Rudolph Giuliani than the left-wing mayor who has drawn the ire of national conservatives.

“I don’t think I have ever been accused of sounding like Rudy Giuliani,” Mr. de Blasio laughed off the comparison today.

The mayor heaped praise on the two men heading the task force—Mr. Bratton who presided over the city in the 1990s as crime dropped, and Mr. Weisbrod who was tasked with redeveloping the bad old Times Square. Nonetheless, and perhaps distancing himself from some comments Gov. Andrew Cuomo made yesterday, the mayor insisted today’s Times Square was nothing like the old.

“It’s a place that people are flocking to because they like it, because it’s safe,” Mr. de Blasio said. “There is a nuisance problem. There is a quality of life problem. We take it very seriously.”

Updated with comment from Mr. Stringer and Mr. Garodnick.

Please read Ari Paul: Why the Mayor Should Rethink His Approach To Times Square 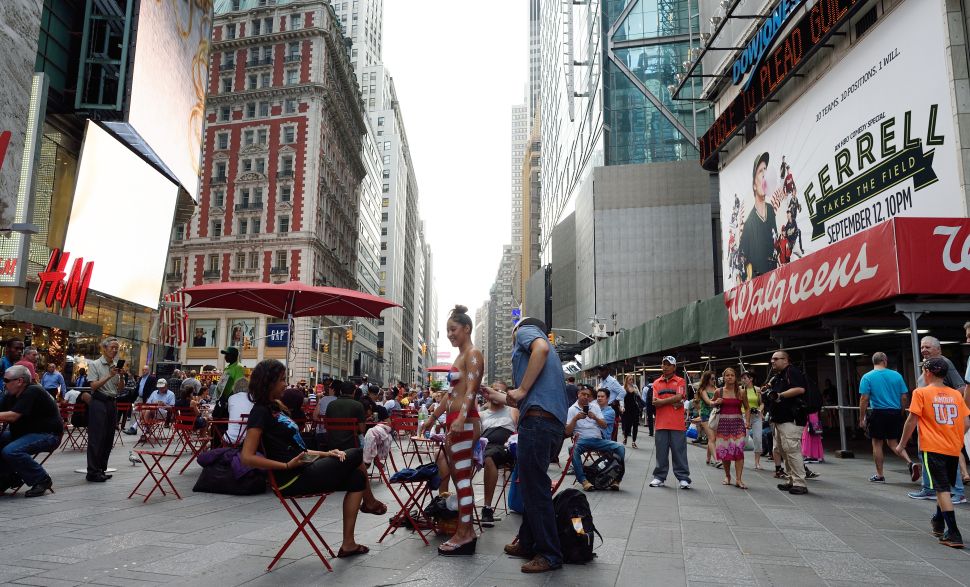