Mayor Bill de Blasio today refused to discuss his decision to stay at the gym for nearly two hours in the middle of a six-hour Staten Island stand-off in which a firefighter was shot twice by a man police have identified as a Bloods gang leader.

“We’re briefing you all on a very serious situation, and that’s just not a serious question,” Mr. de Blasio curtly replied during a press conference at a Staten Island police station when asked about his gym schedule.

The alleged shooter, Garland Tyree, was killed this afternoon, ending the stand-off that began at 6 a.m. when a task force of federal and NYPD officers tried to serve a federal warrant at the home in Staten Island’s Mariners Harbor neighborhood and were met with heavy smoke coming from under the door—which police now say was due to a smoke bomb they found in the home. Shortly after FDNY Lt. James Hayes entered the apartment to investigate the smoke, Tyree shot him twice in the lower extremities, officials said today during a press conference.

After hours of negotiations, Tyree said that after speaking to his mother—who police flew in on a department helicopter from Delaware—he would exit and surrender, police officials said today. But instead of exiting peacefully, Tyree fired shots from inside the apartment at department vehicles, and then exited while continuing to fire shots from a fully automatic AK-47, Mr. Bratton said. Officers returned fire and killed Tyree.

But despite calling the situation “very serious,” it apparently was not serious enough to interfere with Mr. de Blasio’s morning gym routine, which involves a drive from his Gracie Mansion home in Manhattan to the Park Slope YMCA in his old Brooklyn neighborhood. Mr. de Blasio’s ill-timed work-out was first reported by NY1’s Grace Rauh, who said it appeared the mayor was at the gym for two hours—or at least, his detail was: Mr. de Blasio left through a back door, possibly to avoid Ms. Rauh and her camera.

Mr. de Blasio’s spokeswoman Karen Hinton first said on Twitter that the mayor was at the gym for 80 minutes, then said on Twitter that he arrived at 9 a.m.—about three hours after the stand-off began and the firefighter had been shot—and left at 10:40 a.m, which amounts to 100 minutes. Ms. Hinton clarified that the mayor’s workout was 80 minutes, but he stayed at the gym to make phone calls.

“Mayor de Blasio was on calls with both Fire Commissioner Nigro and Police Commissioner Bratton about the situation on Staten Island throughout the morning, starting at 7 am, and he continued receiving multiple updates until he departed for Staten Island. This includes leaving the gym to make and take a series of calls from approximately 10:40 to 11:15, when he departed for Staten Island,” Ms. Hinton said in a statement. “The mayor has met with the wounded firefighter and his fellow firefighters at the hospital, and will soon update the media on both the situation on the ground in Staten Island and the wounded firefighter’s condition.”

During his press conference, the mayor spoke at length about his time with Mr. Hayes in the hospital, saying the firefighter was in good spirits and making light of his condition and calling him a “proud Staten Islander.” He heaped praise on first responders.

“It’s a day when they all handled their jobs in exemplary fashion. There’s a lot to be proud of today in the way our first responders handled something you just can’t be prepared for,” Mr. de Blasio said.

Before entering the apartment, Mr. Hayes spoke with Tyree about the smoke, Mr. Nigro said.

The incident comes as the mayor has struggled to overcome a growing perception of rising crime and disorder in the city, fueled in part by intense media coverage of homelessness and a 10 percent spike in homicides this summer. A recent Quinnipiac survey found that despite continued record low crime, most New Yorkers ranked quality of life the lowest since 1997. Earlier this summer Mr. de Blasio repeatedly noted that the rise in violent crime was largely isolated to gang disputes—but today’s shoot-out is an example of gang violence spilling beyond gang-member-on-gang-member assaults. Sources speaking to the Staten Island Advance described Tyree as the leader of the Bloods gang on the East Coast, and the paper noted his long rap sheet in the borough.

The gym detour is just another chapter in Mr. de Blasio’s complicated relationship with Staten Island, the city’s most conservative borough, where the mayor is exceedingly unpopular according to opinion polls. Last summer saw the mayor grappling to deal with fallout from the death of Eric Garner, a black man who died when a police officer used an apparent chokehold to wrestle him to the ground in an attempt to arrest him for selling untaxed cigarettes. There have also been Staten Island controversies of a significantly less dire nature—Mr. de Blasio’s use of a fork to eat pizza, his few visits to the borough, and his dropping of its marmot mascot, Staten Island Chuck, among them.

Updated with additional comment from Mr. de Blasio’s office to clarify the length of his time at the Park Slope YMCA. 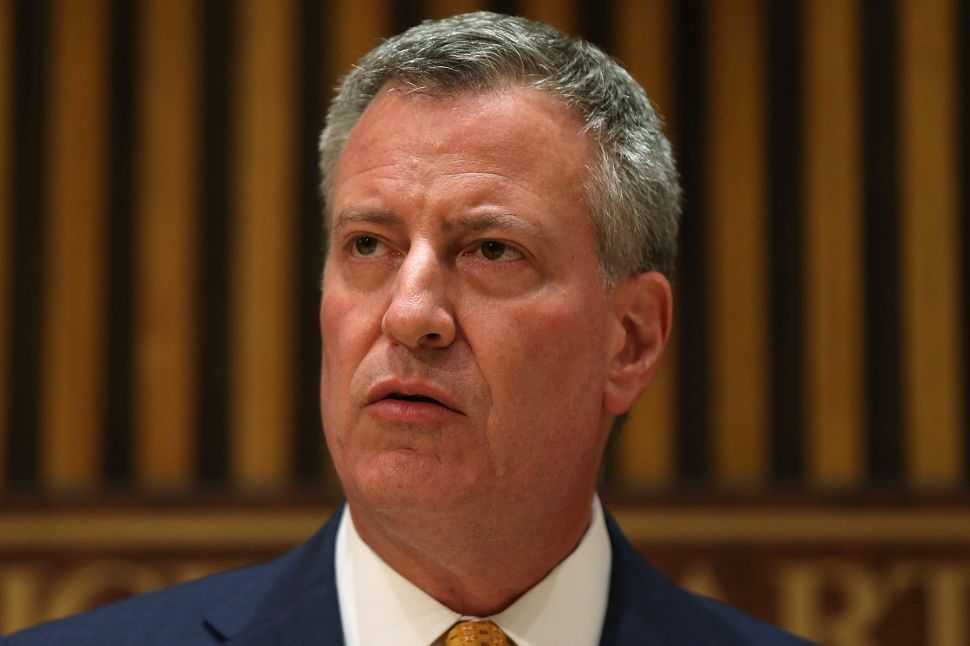