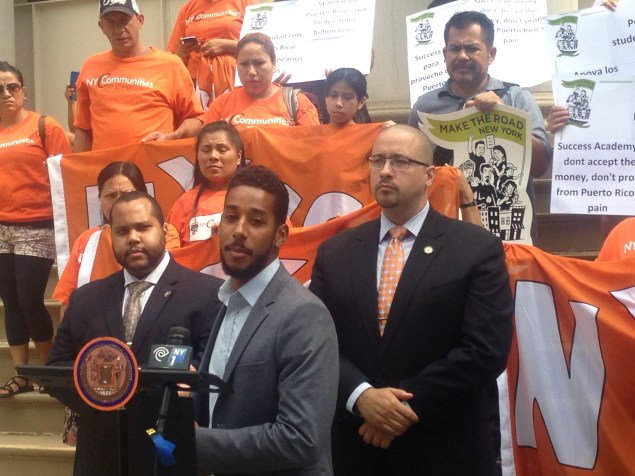 Latino elected leaders joined liberal anti-charter school activists on the steps of City Hall to demand that Success Academy Charter Schools return an $8.5 million donation from hedge fund manager John Paulson because of his role in the Puerto Rican debt crisis—where the government is slashing education spending in a desperate effort to balance its books.

Standing with liberal groups like New York Communities for Change and the Working Families Party—both of which have ties to teachers unions and the de Blasio administration—the politicians argued that Success, the largest chain of charter schools in the city, was both profiting from austerity pains in Puerto Rico and sending a message to students with roots in the island. Mr. Paulson last year hailed the island as the “Singapore of the Caribbean” after his firm Paulson & Co. scooped up $120 million in tax-free Puerto Rican municipal bonds last year.

“This is blood money that he’s making off the island,” said Bronx State Senator Gustavo Rivera, a native of Puerto Rico. “This is the same money that’s actually flowing to Success Academy.”

“Everybody here who’s potentially benefiting from this massive economic disaster in Puerto Rico, don’t use this as an opportunity to aggrandize yourself,” he said.

It was a sentiment Brooklyn Councilman Antonio Reynoso, another Dominican-American, echoed.

“Tell me who your friends are and I’ll tell you who you are,” Mr. Reynoso said, quoting a popular Spanish proverb. “Right now, the message Eva Moskowitz is sending to us and the diaspora of Puerto Rico is that her friends are false, and they take advantage of the terrible financial policies in Puerto Rico that have crippled the residents and the citizens of Puerto Rico.”

Mr. Paulson also has a stake in several hotels and resorts in the territory. Several outlets have reported the billionaire, who also has holdings in banks and utilities in Greece, is in fact taking a bath on his investments as the island has begun to default on the debt—though the New York Times and CNBC allege that Paulson & Co. quickly sold off its shares of Puerto Rican bonds shortly after buying them.

Many liberal advocates blame federal policy, which curtails the commonwealth’s trade, inhibits its ability to collect taxes and limits its aid from Washington, for the debt crisis. They have called on Congress to pass a bill that would allow the territory to restructure its municipal debts the same way a state would—a power Puerto Rico does not currently possess.

Paulson & Co. did not immediately respond to requests for comment. Ms. Moskowitz, however, defended both the financier and her decision to accept his money. She noted Mr. Paulson has given to numerous other organizations, including the Central Park Conservancy and Harvard University, and argued the money would allow students in the five boroughs to access a better education.

“Success Academy is proud to accept money from John Paulson, one of the the country’s leading philanthropists,” she said in a statement sent to the Observer. “His gift will benefit thousands of New York City children who would otherwise be forced to attend failing schools.” 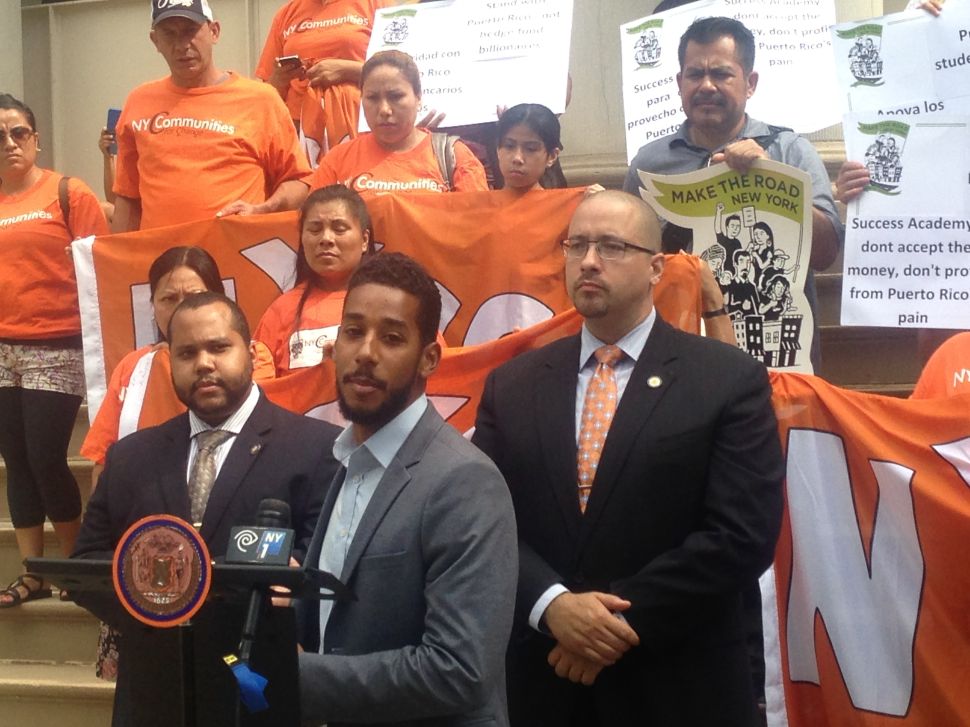