Among Democrats, there has been a great deal of talk for many years now about the possibility of evolving demographics potentially affecting the course of presidential politics in several states that are currently safely Republican. The two that invariably come up most often are Texas and Arizona.

It is no mystery why Democrats are keen on either of these states: the growing Hispanic populations in both states, coupled with the increasing propensity of Hispanic voters to vote Democratic, has led some on Team Blue to believe they can contend, at least in presidential races, in both of these southwestern states—perhaps soon.

In Texas, U.S. Census Bureau estimates as of 2014 indicated only 44 percent of the state’s 26 million residents were non-Hispanic whites, with Hispanics making up 38.4 percent. Coupled with the state’s African-American population, coming in at 12.4 percent, black and Hispanic Texans now make up a majority of the state’s population.

The numbers are somewhat less tilted toward non-whites in Arizona, and yet, Hispanics do make up 30.3 percent of the state’s population, with non-Hispanic whites accounting for just 56.7 percent.

And yet, neither state is yet close to flipping to Team Blue in presidential elections, based on the most recent results and expert analyses provided to the Observer. Texas, which hasn’t voted Democratic in a presidential election since 1976, went for Mitt Romney in 2012 by more than 1.2 million votes, with Mr. Romney crushing President Obama in the Lone Star State, 57.2 percent to 41.4 percent.

Dr. James Henson, director of the Texas Politics Project at the University of Texas at Austin, told the Observer via e-mail that it will take more than demographic changes alone to move the needle in the state.

“I think that after the initial flush of ‘demographics are destiny’ talk in the Texas Democratic Party, people’s expectations have gotten more realistic—especially, of course, after the 2014 (midterm) election,” Dr. Henson said. “The core problem, of course, is the comparatively low turnout rate among Hispanics, though the flip side of that is the increasing lock the Republican Party of Texas has on the white vote.”

Dr. Henson referenced a Gallup survey that indicated Texas Hispanics are less locked in for Democrats than Hispanics nationally, who gave President Obama 71 percent of their votes in 2012

“Hispanics in Texas identify with the Republican Party at higher rates than their counterparts in other comparable states,” Dr. Henson said. “It’s not as if there is a rush among Hispanics to become Republicans, but the baseline attitudes that make Texans overall more conservative than the national mean also tend to apply to Hispanics, though of course there is a somewhat unique dynamic to this.”

Arizona, which the president’s team made some early noises about contesting in 2012, supported Mr. Romney by slightly more than nine percentage points. That marked the 15th time in the last 16 elections that Arizona voted for the GOP presidential candidate, the exception being 1996. The last time it had gone Democratic before 1996 had been in 1948.

According to a report issued in 2012 by the Morrison Institute for Public Policy’s Latino Public Policy Center, based at Arizona State University, Latinos are on course to bring about significant changes in Arizona politics: “Unless there is an unforeseeable sea change in Latino voting patterns, Arizona is destined to become a much less Republican-dominated state, perhaps even changing from red to blue in the coming decades.”

But here’s the kicker: “The change will be slow.” In fact, the report estimates—based on current ethnic trends in partisan identification—that Democrats will only achieve parity with Republicans in Arizona in 2030. That’s still more than four presidential elections away, so this developing trend, in and of itself, is unlikely to make Arizona competitive in the upcoming contest.

So for Democrats who would like to expand the map, and create more holes in the electoral dike than Republicans have fingers to plug them, where to turn? One possible answer that doesn’t get as much attention as Texas or Arizona, but that appears more promising—at least based on its recent presidential election performances—is Georgia.

Although the Peach State hasn’t gone Democratic in a presidential election since 1992, Georgia was relatively close in 2008 and 2012. President Obama only lost Georgia by slightly more than 5 percentage points in 2008, and in a less congenial 2012 environment, the president lost the state by slightly less than 8 percent. The president performed relatively well in the state even though he did not devote significant resources to competing there.

With Georgia’s population growing rapidly—it is now estimated by the U.S. Census bureau to be the nation’s eighth-most populous state—and much of that growth fueled by migration into the surging Atlanta area by African-Americans and young professionals, one might easily conclude that the Democratic Party would have Georgia on its mind. This, after all, is a very similar formula to the one that has turned Florida and Virginia blue in the last two presidential elections, and North Carolina purple.

While it is highly unlikely that the Democrats will flip states like Texas, Georgia and Arizona in 2016, the good news for them is that they probably don’t need to.

However, Dr. M.V. Hood III, professor of political science at the University of Georgia, is not convinced that Georgia is any likelier than Texas or Arizona to move in a leftward direction in the coming decade. He noted that the historic nature of President Obama’s campaigns and the resulting spike in African-American turnout may have meant that his relatively good performances in Georgia were outliers.

“Black turnout has been up, and a lot of that corresponds with Obama’s two presidential runs,” Dr. Hood told the Observer during a recent telephone conversation. “Midterm election turnout has also been up during that time. One question I have about 2016 is: Will black turnout continue at the same pace, or will it see a dropoff?”

Dr. Hood noted that Republicans have moved into a dominant position in Georgia since the dawn of the 21st century. They captured the governorship in 2002 for the first time since Reconstruction, while at the same time capturing a U.S. Senate seat that had been considered safely Democratic. The GOP has held the governorship ever since and now holds both Senate seats, 10 of Georgia’s 14 U.S. House seats, and just barely short of two-thirds of the state legislature. While Dr. Hood does expect that in-migration to Georgia from outside the South will ultimately benefit the Democrats, he doesn’t see it happening in the immediate future.

“I’m not viewing Georgia in the next 10 years as being very competitive,” Dr. Hood said. “That’s my opinion for now. If some of these things shift or change, I may have to change my opinion.”

If these experts are correct, the Democrats may not have any room to grow in 2016 beyond their spectacularly successful electoral results of 2008. But it isn’t all bad news for Team Blue.

In fact, the Democrats start the 2016 presidential campaign in a very advantageous position. Looking at the last six presidential elections, there are 18 states, plus the District of Columbia, which Team Blue has captured every time, for a total of 242 electoral votes. That figure represents 89.6 percent of the 270 electoral votes required to retain the White House in 2016. If Democrats can retain those 18 states and D.C., then just adding Florida, with its 29 electoral votes, would put the Democratic nominee over the top and into the White House.

That 242 figure doesn’t even take into account three other states—Iowa, New Mexico and New Hampshire—that Democrats have won in five of the last six elections. Add all three of those in and Team Blue starts at 257, needing to add only Virginia’s 13 electoral votes to win.

Republicans, meanwhile, have only 13 states they have won in each of the last six elections, accounting for only 101 electoral votes. If we add in nine additional states that Team Red has captured in each of the last four elections, plus Indiana—which has gone Republican in every presidential election but one since 1964—Republicans still only get to 190. That’s 80 short of what they would need to recapture 1600 Pennsylvania Avenue.

In short, unless the Republicans make inroads behind the Dems’ vaunted “Blue Wall,” Team Red would nearly have to run the table to recapture the White House next year. So while it is highly unlikely that the Democrats will flip states like Texas, Georgia and Arizona in 2016, the good news for them is that they probably don’t need to. 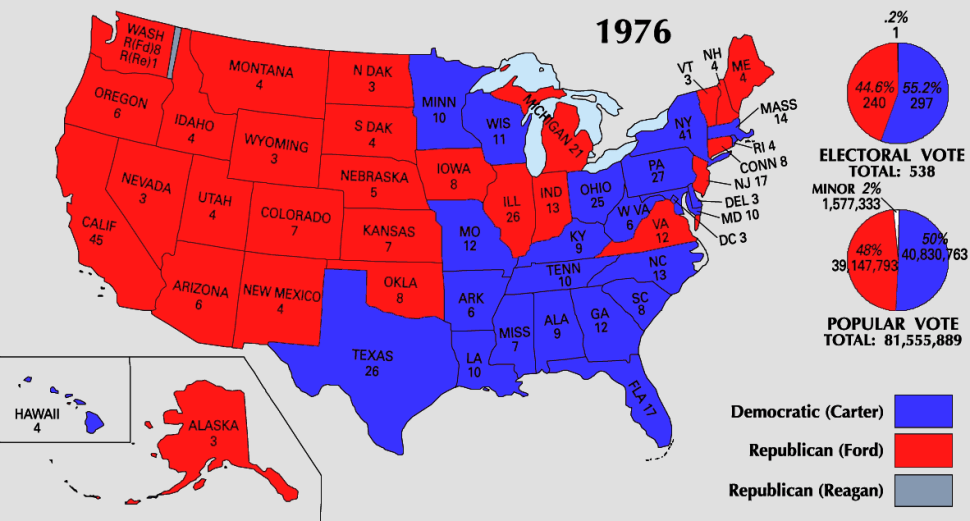