The night the Iran nuclear deal was announced was a sleepless one for Harvard Law Professor Alan Dershowitz, utterly distraught by the terms of the agreement.

“I got up and emailed my eBook publisher and said I have an idea. What if I do an eBook that could be out in time for the congressional debate? He thought it was a great idea,” Dershowitz explained in an exclusive interview with the Salomon Center for American Jewish Thought. “He gave me two weeks to write it. He got it in eleven days.”

Fears of Iran obtaining a nuclear weapon have haunted supporters of Israel and advocates of Middle East peace for over a decade, stoked by frequent public reminders by back-to-back regimes of the Islamic Republic that their goal is the annihilation of the Jewish State.

“This book took me less than two weeks to write and ten years to research, so I’ve been thinking about and writing about this potentially for ten years,” explained Dershowitz. “I wrote my first long article about this in 2005. I had my ideas and I’ve been following the deal very closely. As soon as the deal was announced, I read it and annotated it, and the pages appear as an appendage to the book.”

Dershowitz explains that he has been writing and lecturing about the threat of a nuclear Iran for over a decade. He has discussed the subject directly with President Obama.

Fifteen days after Dershowitz decided to write The Case Against the Iran Deal: How Can We Now Stop Iran from Getting Nukes?, it was released on Kindle and the following day was the number one international Kindle best seller.

“People want to read about the deal. People want to be informed; they want to read the actual text of the deal. They want an informed judgment as to what’s good about it, what’s bad about it,” said Dershowitz. “There are some positive elements, but in my view most of the elements are quite negative and it virtually assures that Iran will get the bomb within a decade.”

Dershowitz, who has been called by Newsweek “the nation’s most peripatetic civil liberties lawyer” and one of its “most distinguished defenders of individual rights,” wrote his latest book not just to educate the public, but to have it serve as a call to action with the hope that citizens will contact their representatives and encourage them to vote against the Iran deal.

“I wrote the book, keeping in mind people I’ve known for years, Senator [Chuck] Schumer, Senator [Elizabeth] Warren, Senator [Ed] Markey, Senator [Kirsten] Gillibrand, various United States senators, Democrats and also some Republicans,” Dershowitz explained. “Clearly I want to influence the outcome of their vote by engaging directly with the senators and congressmen, first with my own writing and ideas. Second, by encouraging their constituents to read it and write to them, call them and urge them to do the right thing.”

He added, “This is not merely an academic book for posterity. It was designed to affect real policies in real time.”

Dershowitz explains that he has been writing and lecturing about the threat of a nuclear Iran for over a decade. He has discussed the subject directly with President Obama.

In his book, Dershowitz writes, “President Obama himself seemed to agree—before his election to a second term—that were Iran to ever develop nuclear weapons, it would be a ‘game changer,’ and he promised he would ‘do whatever it takes’ and ‘everything that’s required’ to ‘eliminate’ this ‘grave’ and ‘real’ security threat not only to the region but to the U.S.”

I asked the liberal icon, in regard to President Obama’s perspective, “What changed?”

Dershowitz believes there are “two theories” that may answer this pressing question.

“The cynical theory, which seems to be supported by the data, is that once he was out of politics, that is, once he couldn’t run again and once the House and the Senate were firmly in the hands of Republicans, he was going to do what he always wanted to do and he was less than completely candid with those of us whom he told that the military option was on the table and that Iran would never be allowed to develop nuclear weapons.”

“The other theory is that he genuinely changed his mind when he saw that Iran had an opening for negotiations. And I leave it to the reader to judge which of those theories is true.”

Dershowitz says that in his book he proves “conclusively” that Mr. Obama changed his policy.

“He took the military option off the table, and that was an extraordinarily naïve and wrong thing to do because that allowed the Iranians to negotiate with us as equals,” said Dershowitz. “And I’m not the only one who has said this. Many liberal Democrats I’ve spoken to believe we made a tragic negotiating mistake, that what we should have done was said to the Iranians: Look—You’re never, ever going to be able to develop nuclear weapons. That’s American policy, and we’ll stop you, whatever it takes.”

By negotiating from a position of strength, Dershowitz believes a deal could have been reached to lift the sanctions, with Iran agreeing to dismantle their nuclear program and permitting 24/7 inspections.

“Now the problem is that we negotiated as equals and we were playing checkers against the people who invented chess, and they checkmated our president and our secretary of state,” Dershowitz said. “The end result is that now we are going to be equals because they are going to have nuclear weapons, and once they have nuclear weapons they are essentially equals, we can’t take them on, we have no viable military threat against them, so it was a double disaster.”

Dershowitz reminds his readers, “in American democracy, we the people, the majority rules; and if the majority of Americans oppose the deal it will ultimately be rejected, if not by this administration, then by the next. In the end, the court of public opinion will decide.

Pressing the professor on this point, I asked, “Wouldn’t public opinion or the perspective of future administrations be rendered moot by the current administration agreeing to the negotiated deal?”

Dershowitz explained that future administrations can put the military option back on the table. He cited the Preamble and General Provisions of the agreement in which Iran reaffirms that it will never, under any circumstances, seek to obtain, develop or secure a nuclear weapon. He believes that future administrations must regard this part of the agreement as a pivotal part of the deal, even if it’s not in the body of deal, “and we will enforce it, and that’s American policy.”

Dershowitz noted, “At the end of the book, I proposed legislation that the policy of the United States be that the preliminaries of the deal is our policy and we hereby authorize the president now, if that policy is violated, to use whatever military force is necessary to prevent Iran from developing a nuclear weapon. That is what we should do now. That’s an alternative to either outright acceptance or outright rejection of the deal.”

An ardent supporter of Israel, Dershowitz believes that this deal makes war between the Jewish State and Iran “more likely.” He also warns that Iran’s battle with ISIS is an “excuse” to build a large conventional military force closer to Israel.

While much of the media focus has been on the Iran deal’s impact on Israel and the Middle East, Dershowitz also fears for the safety and security of the United States. He believes the deal assures Iran will get a nuclear bomb within ten years and allows the Islamic Republic to develop intercontinental ballistic missiles without much constraint.

Dershowitz continued, “I think this will be his legacy in terms of international relations and I think it will result in an increase in the nuclear arms race, an end to anti-nuclear proliferation, an increase in the likelihood of war, and a greater gulf between Israel and the United States. All of which he promised would not happen.” 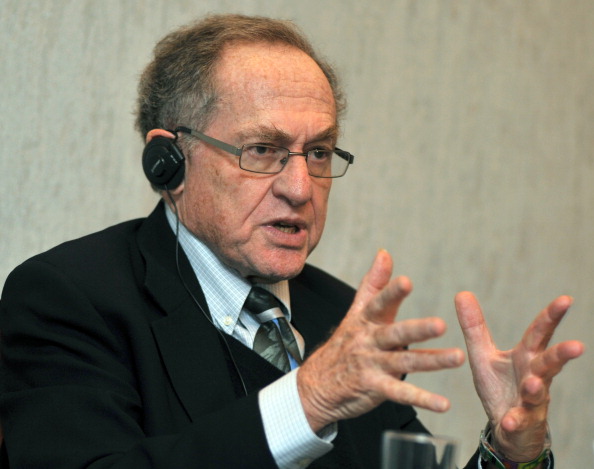