Comedy fans heard what seemed to be a familiar voice defending Mayor Bill de Blasio this morning on WNYC’s Brian Lehrer Show: “Louis, in the Village.”

A man who sounded an awful lot like comedian and actor Louis CK, and who shared his first name and the neighborhood where the comic is frequently spotted performing, called in to the popular radio show to jump into a discussion of the mayor’s “optics” problem—his apparent inability to capitalize on his successes in recent polls and in the press.

“You know, I really like this mayor, and it’s bothered me that there’s sort of a culture of clickbait in the news right now that only little negative stories get attention,” Louis in the Village told Mr. Lehrer and his two guests, New York Times reporter Michael Grynbaum and Politico reporter Azi Paybarah.

Almost immediately after the call, speculation began that the listener was actually Louis CK—who earlier this month spent a day shadowing Mr. de Blasio around City Hall and to a municipal budget meeting, with Mr. Lehrer’s Twitter account quickly responding to a question from a listener:

You're not the only one thinking that, @sheiman. Wonder if it really was @LouieFX…? https://t.co/XBKrYnEjvw

The WNYC account also followed up to say they were “pretty sure” the comedian had called in.

Hold the press, we're pretty sure Louis C.K. just called into the @BrianLehrer show…anyone else hear that? Can someone text him and ask?

Whoever the caller was, he took issue with criticism of the mayor for not touting his achievements to the public.

“To me that’s a huge waste of time,” the caller said. “I don’t want a mayor that spends all his time bragging and taking victory laps.”

The caller took particular issue with a recent page one Times story about piling missteps—going to the gym in the middle of a stand-off, his walking away from an effort to cap Uber, spats over Legionnaires’ disease—getting in the way of Mr. de Blasio’s work on issues like housing or pre-kindergarten.

“I’m a little disappointed in the New York Times, which is my newspaper, for writing an article that says those things accumulate to a real negative,” the caller said.

The Observer reached out to Louis CK’s press representative but hasn’t heard back about whether the comic was indeed the caller. (On Twitter, WNYC’s account noted the call was anonymous so they don’t have a way on determining for sure who it was.)

If it was him, it wouldn’t be the first time Louis CK took on the press on behalf of the Mr. de Blasio. At this year’s Inner Circle Show, a roast of the mayor put on by members of the press, the comic played Mr. de Blasio’s interpreter—bashing the press when the mayor kept his own criticism more polite. “If you weren’t here, he would fix everything in three fucking days,” the comic cracked.

Other allies of the mayor in the City Council and activist communities, meanwhile, are slated to criticize the media this afternoon—at a press conference to rebut recent media portrayals, particularly in the New York Post, that they argue is vilifying the homeless.

You can compare the audio of “Louis from the Village” to the well-document voice of Louis CK below.

Click here to “Louis from the Village” On WNYC, whose call comes around 18:50 minutes into the show.

Compare that to Louis CK on Conan decrying cell phones: 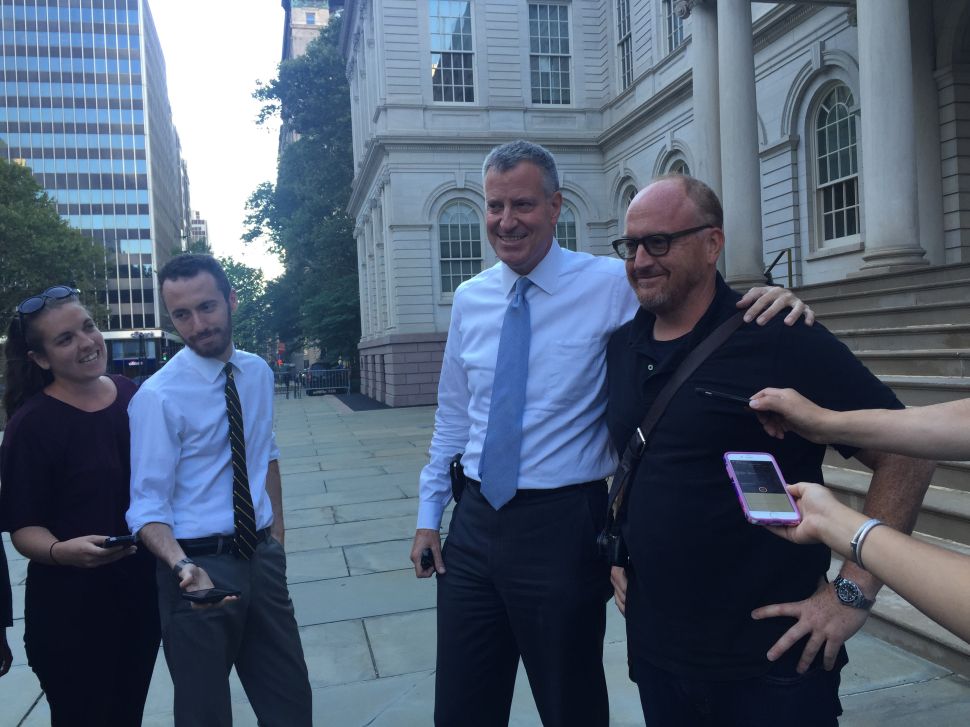