In this weekend’s New York Times, Edward Frame wrote a dishy, behind-the-scenes essay about his experience as a captain at a restaurant in the city with three Michelin stars. “Dinner and Deception,” read the stark headline. “Serving elaborate meals to the super-rich left me feeling empty.” The article is complemented by some shadowy illustrations by Owen Freeman, which lend it intrigue and mystery.

And the piece is mysterious, mostly because Mr. Frame leaves the restaurant and its chef unnamed. By now, discerning readers have concluded that the place described in the article is Eleven Madison Park, in the Flatiron District. One key detail gives it away: Mr. Frame describes a sign in the kitchen that reads “Make It Nice,” which hangs in the kitchen at Eleven Madison Park. Plus, there are only six restaurants in New York with three Michelin stars, and it’s no secret that Eleven Madison Park has punctilious service, as a recent Grub Street piece reveals.

Mr. Frame, who is 27, confirmed in a phone conversation on Monday afternoon that the restaurant is indeed Eleven Madison Park. “The cat is out of the bag on that one,” he told the Observer. But he seemed disappointed that readers were so interested in finding out the identity of the restaurant, which he chose not to name. Most of the blog posts written about Mr. Frame’s article were focused on that detail. (“Which NYC Restaurant Is a Gluttonous Sex Playground for the Superrich?,” read a Gawker headline.)

Mr. Frame also took issue with the fact that most readers saw the piece as an indictment of the seedy culture of fine dining in New York, as well as the decadent lives of the uber rich. “That’s not what I wanted to accomplish by writing the piece,” Mr. Frame said. “The reason I kept it anonymous is because I think it’s a more general meditation on the nature of the work.”

You can hardly blame readers for not seeing it Mr. Frame’s way, given the presentation of the article—which he had no control over—and the incriminating details he included.

“In a playground for the superrich, I was an overpaid chaperone wearing a bespoke suit,” Mr. Frame writes in a paragraph that one could read as particularly damning. “Gluttony was common. So was sex; more than once we had to interrupt coitus in the restroom . Once a woman asked to leave her baby at the coat check. When the maître d’ explained that dinner lasted at least three hours, she stared back at him, unfazed. ‘Yes, I know.’ Grown men wearing Zegna and Ferragamo would sit at the bar chanting, ‘We are the 1 percent!’ ”

Mr. Frame admitted that his tone was at times critical. But he told the Observer that, over all, he enjoyed working in the service industry—that it can, indeed, be “life-affirming.” He “tremendously respects” the cooks and servers alongside whom he once toiled. He is now a graduate student at the New School, getting his master’s in journalism. He has never been published before, and he said he submitted the article to the Times through the standard channels. “Somebody picked it out of the slush pile,” he said.” (It was edited by Peter Catapano, a Times opinion editor.)

He spoke with the Observer because he felt that readers hadn’t understood the piece in the way he had intended. “What I wanted to explore was the psychology of a certain kind of work that entailed this kind of dividedness that can be pleasurable but also kind of strange,” Mr. Frame said. “I think that’s something that’s not just prevalent in the service industry but a feature of modern work in general, and I thought that would be an interesting subject for a personal essay.”

That subject is certainly present in Mr. Frame’s piece—there’s a paragraph on Marx’s “estranged labor” and Adam Smith’s nail-cutters—though it was overshadowed by the culture he describes. Instead of starting a conversation about the nature of work, Mr. Frame’s essay mostly ignited a guessing game about the identity of a restaurant. 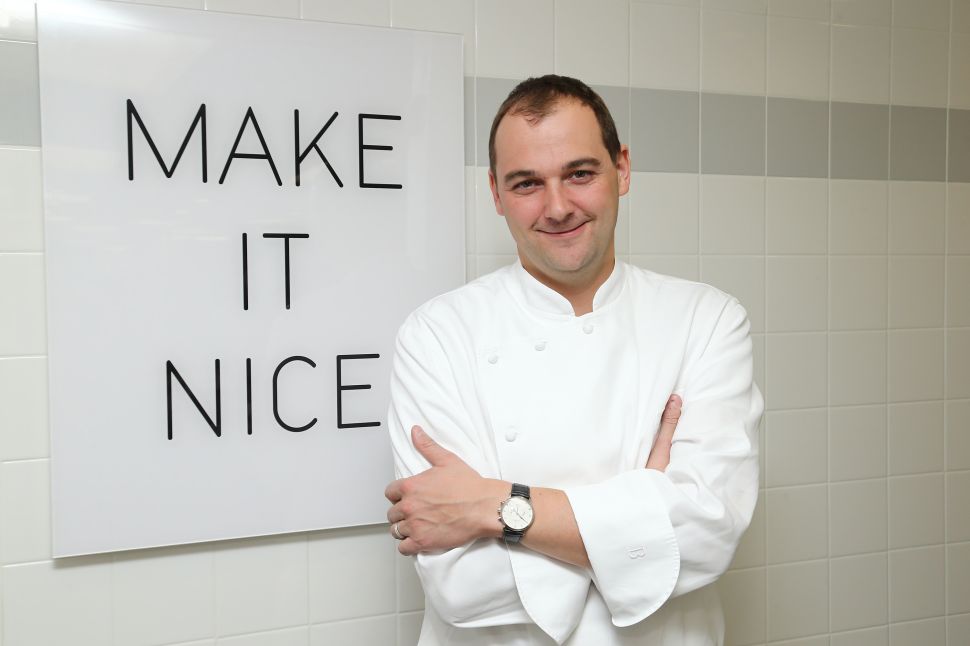