Scoring the dream rental—good space, great location for something resembling an affordable price—has long been the true unofficial sport of New York, with “what’s your rent?” passing for a perfectly acceptable (if gauche) introductory query at social events. But with deals in short supply and increased competition—Manhattan residential vacancy rates now hover around 1.13 percent, according to Citi Habitats—the rental stakes are higher than ever before. And in an era in which paying the lease price (and above) is no guarantee of triumph, coming up with creative inducements can help close the deal.

With few exceptions, cash is king, and offering to pay above the asked monthly rent is now a standard negotiating tactic. To really stand out, some would-be tenants even offer a year’s rent up-front. That’s what Brooklyn playwright Marcy Lovitch did to get a one-bedroom in a Carroll Gardens brownstone. “I’d been looking for an apartment for awhile and was down to less than a week left to find a place before I had to vacate my old apartment,” she told the Observer. “My landlord figured getting $31,000 all at once would save him a lot of headache.” Having been successful with that ploy once, when it came time to renew her lease, Ms. Lovitch offered to pay another six months in advance in exchange for foregoing a proposed $75 a month rent hike. “Parting with another $15,000 definitely gave me pause, but in the end I’ll save $600 over the course of the lease.”

Getting rent in one lump sum doesn’t appeal to everyone. “Some landlords don’t like the year up front because it messes with their tax bracket,” pointed out Douglas Wagner, a broker at BOND. “If they pay quarterly, that could have an impact on their tax liability.” In addition, accepting the money in advance means being locked into a relationship with a tenant who may turn out to be less than ideal.

“If the tenant is obnoxious or difficult or breaks the terms of the lease by, say, subletting the apartment, it’s much harder to enforce the lease or evict if you’ve accepted the rent in advance,” said Tammy Hsu of Citi Habitats.

One way would-be renters, particularly those with less-than-stellar financials, woo landlords uninterested in accepting an upfront payment is to offer a bigger security deposit. “I’m seeing, last year and this year, especially, landlords getting four [months], six, even a year in security,” said Mr. Wagner.

When an offer of cold cash alone seems unlikely to gain favor, some prospective tenants up the ante with other inducements. “I’ve seen everything from clients dropping off cupcakes with their application, or a really good bottle of wine, to offering the use of a sports car for a week,” said Itzy Garay, a broker with Town.

“Savvy clients will look around at what they have access to and use it to their advantage,” said David J. Maundrell, president of AptsandLofts.com. “That could be getting someone a table at a hot restaurant or club or tickets to a big game.”

Lack of hospitality or entertainment contacts can spur would-be tenants to come up with more practical enticements. “One client offered to renovate the outdated kitchen on their dime,” said Ms. Garay, adding, “it didn’t work.”

One broker, who asked not to be named, mentioned a situation in which a client had offered sexual favors in return for being placed at the top of an application list.

However, sometimes offering to take care of a building problem can help make your case. “In some of the older apartments that have linoleum or bad carpeting covering the original hardwood floors, I’ve had clients who’ve told landlords they’d re-do the flooring themselves in order to secure a lease,” said Mr. Maundrell. “Some have offered to do light maintenance on the property, like taking care of the recycling for the building in exchange for consideration.”

Ms. Hsu recalled a client who was an optometrist. “She owned her own practice and was constantly offering free eye exams and discounts on frames,” she says.

Is there a limit on what a determined New Yorker will offer to secure a rental lease? One broker, who asked not to be named, mentioned a situation in which a client had offered sexual favors in return for being placed at the top of an application list.

Other tenants have found less obvious ways to leverage their assets to put together a winning bid. “Last summer there were multiple applications for a two-bedroom with a fireplace and a garden in that very picture postcard part of the West Village,” noted Mr. Wagner. “Everybody wanted this apartment, and of course everybody was trying to outdo each other.” In the ensuing bidding war, the rent, which started at $5,000, ballooned up to $6,000. However, this battle of the checkbooks was decided by a leftfield offer. “The triumphant bidder sent over a portfolio on a beachfront property that he owned in St. John and instructed the broker to let the landlord know that if his application was accepted he would not only pay the price but also give the owner and his family a week’s free vacation.”

Of course, not everybody has a beachfront property that they can barter or unlimited reserves of cash to win a bidding war. Sometimes the personal touch works. “I’ve had clients include a personal letter detailing why they love the apartment,” said Ms. Garay. “They included photos of themselves, their family and their pets.”

Mr. Wagner recounted the story of a recent rental of a Perry Street one-bedroom. “The asking price was $4,000 and there were multiple applications,” he said. “One couple from out of town wrote a love letter to the landlord about why they were moving to New York, how much the apartment spoke to them and how much it felt like home.” They also made sure to compliment the landlord (an amateur woodworker) on the improvements he had made on the place himself. Their bid won.

And then there are the acts of flat-out whimsy. “A couple in Chelsea who owned a building on one of the tree-lined blocks in the west 20s were considering multiple applicants to a one-bedroom,” remembered Mr. Wagner. “Overnight, a would-be tenant covered the entire stoop in flowers so that in the morning the owners, who lived in the building, would be overwhelmed with the display. It really showed their level of affinity.”

They didn’t get the apartment. 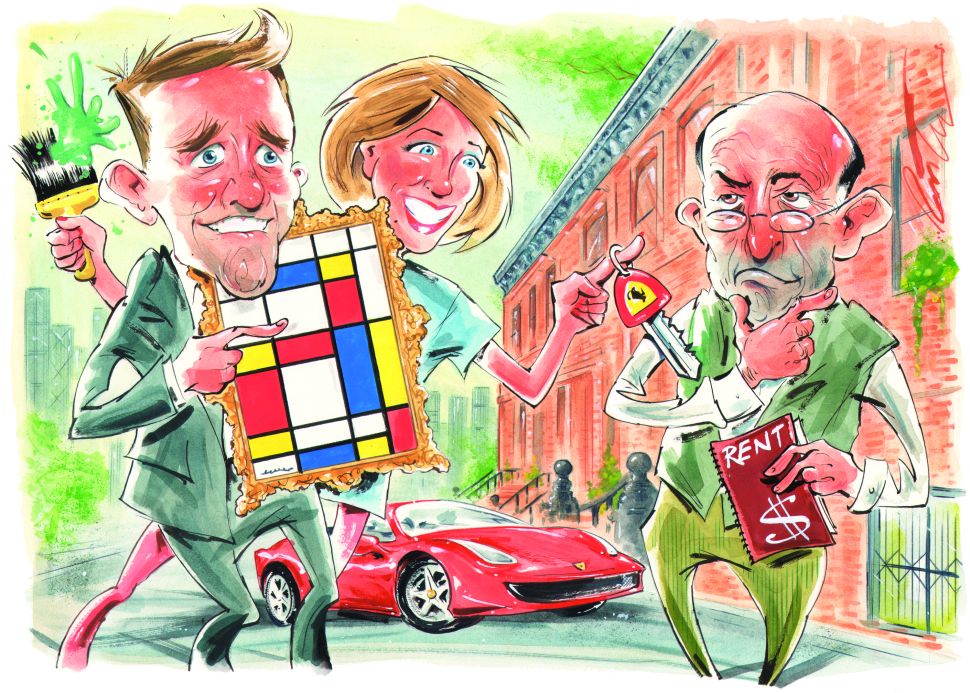