It isn’t often than a guest on Fox News Channel can say things like this without being interrupted, shouted down or ridiculed. But Megyn Kelly wisely kept almost silent while one of Wednesday night’s guest spoke from a broken heart and a shattered life.

“We’ve got to do something about crazy people getting guns,” the man told Kelly. He said the governor of Virginia promised to help do “whatever it takes to get gun legislation to shame people, to shame legislators into doing something about closing loopholes in background checks and making sure that crazy people don’t get guns.”

The speaker was Andy Parker, father of Alison Parker, the Roanoke news reporter shot to death on live television Wednesday morning a bitter former TV station reporter who felt persecuted because he was both black and gay.

He also killed Adam Ward, her cameraman. Their interview guest, Vicki Gardner of the local Chamber of Commerce, was wounded but is expected to survive. The shooter – former WDBJ reporter Bryce Williams (whose real name is Vester Lee Flanagan II) – died of a self-inflicted gunshot wound.

It wasn’t television’s first live murder. That one came on Sunday, Nov. 24, 1963, when Jack Ruby, a Dallas nightclub owner, shot Lee Harvey Oswald, who had killed President John F. Kennedy two days before. But Wednesday’s killings were the ultimate reality programming of the self-made video era.

Not only did the killer wait until the camera showed the reporter, he also recorded the murders himself and posted the video on the internet in a stroke of meta-McLuhanism. If it bleeds, it leads, they used to say. Indeed, their killer saw to it

And he was multi-media. In a manifesto faxed to ABC, he said he wanted to start a race war, just like Dylan Roof, a white Confederate flag zealot who murdered nine African-American in a Charleston (S.C.) church earlier this summer. (In Wednesday’s event, the killer was black, the victims white).

“As far as Dylan Roof, you (expletive) want a race war?” the killer wrote. “BRING IT THEN, YOU WHITE (expletive).”

Ms. Kelly, who often exploits issues of racial strife, virtually ignored this dangerous edge to the story, as did most other cable news stations and major network evening newscasts. But Ms. Kelly – increasing edging out Bill O’Reilly and Sean Hannity as the star of Fox prime time – dominated the evening with a searing interview of not only Parker’s father but also her fiancée, a local TV anchor and co-worker named Chris Hurst.

And in an awkward digression, Mr. Parker compared his own daughter to Ms. Kelly.

“We joked with her that she was the perfect Fox News girl,” he said. “She was pretty, she was blond and she was extremely smart.”

Even Ms. Kelly’s second major “get” showed up a colleague. After Mr. O’Reilly complained that Jorge Ramos of Univision refuses to visit “The Factor,” Kelly gleefully told her audience “Guess what? He’s here next.” She interviewed him at length.

So powerful was Ms. Kelly’s emotive interview with those who loved the dead reporter that it became a significant part of Lawrence O’Donnell’s show in the following (10 p.m.) hour on MSNBC. Mr. O’Donnell’s “Last Word” opened with an irrelevant story, for this news cycle, about the Iran nuclear negotiations. That seemed strange and out of sync.

After the first commercial break, the re-writing of the script became obvious when O’Donnell began to use clips from Kelly’s show before extensive discussion about the shootings. In the 9 p.m. hour, while Kelly was slamming the competition with her exclusive dual interview, Rachel Maddow on MSNBC presented an incomprehensible show that began with a confusing story about false filing for presidential candidates that tried to be funny.

Then came a feature comparing how Presidential candidate Donald Trump insulting Mr. Ramos of Univision was akin to President Richard Nixon sparring with Dan Rather of CBS four-plus decades ago. When she finally got around to the shootings, she offered only a four-minute wrap-up of the day’s events without depth or perspective.

It was only slightly better on “CNN Tonight” with host Don Lemon, when reporter Chris Cuomo tried to debate presidential candidate Jim Gilmore into arguing about gun control. Mr. Gilmore –former governor of Virginia – refused to take the bait and chewed up valuable minutes with boilerplate Second Amendment talking points straight from the National Rifle Association.

When Mr. Lemon interviewed Dr. Ben Carson – a surgeon running for the Republican Presidential nomination – Mr. Carson also brushed off such questions: “People are the problems, not so much guns.”

One of few high moments on “All In” with Chris Hayes at 8 p.m. on MSNBC was guest Charles Pierce of Esquire saying how we have “crossed some horrible Rubicon” . . .”Somethings’ come loose in the country . . . Frankly I’m worried about it.”

One of the best missed opportunities came on ABC’s “World News Tonight” when reporter Pierre Thomas voiced over a video of the killer and said “Here he is in one of his stories holding a gun, a man slowly descending toward madness.”

Nice get, except that the words at the bottom of the screen – the “lower third” in TV talk – obscured the most important part of the scene – his hand on the gun.

But for pure sensationalism and cynicism, none could top “The O’Reilly Factor” at 8 p.m.. on Fox. After opening with a long scolding of Mr. Ramos for questioning Mr. Trump, Mr. O’Reilly eased into the shooting segment by showing a freeze-frame of the terrified reporter as she was shot.

As the picture stayed on the screen, the audio continued with the sound of eight shots and nine female screams. It was cut like the trailer for a horror film. They showed it twice, exploiting it far more graphically than any other cable or over-the-air outlet.

After mailing in the rest of the story with already known facts, Mr. O’Reilly made great time for former comedian Dennis Miller, who amused his host with wise cracks about the penis of Vladimir Putin, the President of Russia.

This is the debut of a new Observer column that will cover television news. 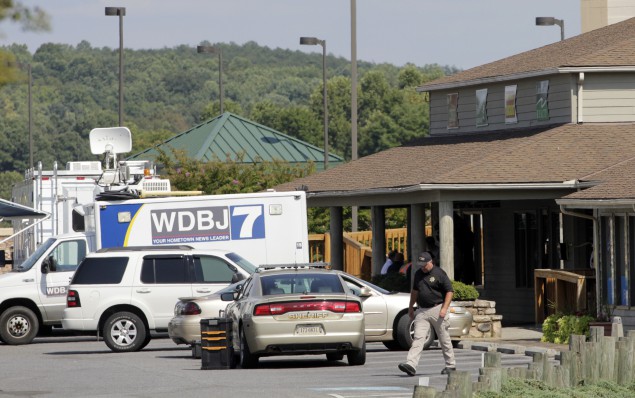