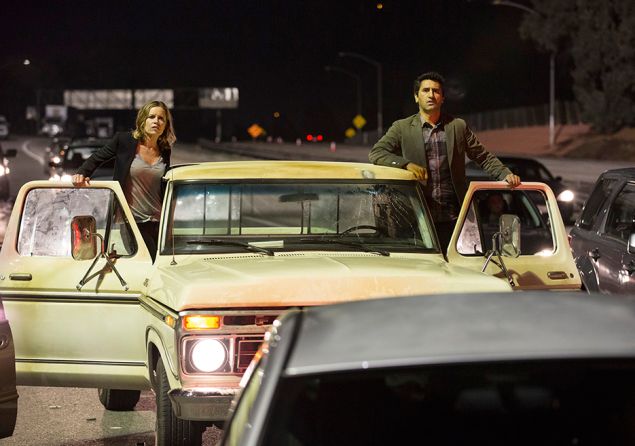 In keeping with the longstanding tradition of characters reading a book or watching a movie that not-so-subtly foreshadows upcoming events, high school English teacher Travis Manawa (Cliff Curtis) is teaching his students To Build a Fire by Jack London on the eve of a zombie apocalypse. To Build a Fire is a simple short story about human v. nature, in which a man travelling with his dog runs into a series of mishaps in cold weather and freezes to death. Fun stuff. As Travis says to that classic lazy student who could be something if he just got his act together, London is trying to teach us “how not to die.”

And when we boil away all the history and the source material and the hype, that’s really all Fear the Walking Dead can be about. If an outbreak occurred in a city as densely populated as LA that killed without reason or prejudice and then brought you back to “life” to continue spreading, what’s the best way to stay alive?

Which is all well and good, but Fear the Walking Dead on a pilot alone doesn’t quite make a strong enough argument for itself. Spinoffs are a strange enough thing as is. I’m sure we’re all aware that Fear the Walking Dead is branched off from AMC’s The Walking Dead, Robert Kirkman’s harder-to-kill-than-a-zombie comic series turned TV juggernaut. And if you weren’t aware until now, well, welcome to context clues 101.

But the strange things about spinoffs is that right out of the gate they need to spend just as much entertaining as they do justifying existing in the first place. If we already spent so much time in the bar from Cheers, do we need to leave it to spend time with Frasier Crane? If we already experienced Breaking Bad, do we need to learn the origins of Saul Goodman? Fear the Walking Dead tries to make the argument that after spending so much time wallowing in a world that at this point has accepted it is one, big zombified frowny-face, we now need to see how it all started.

Which works on one level — it’s just plain scarier. Horror is always more frightening when that horror is new and confusing. It’s refreshing to see junkie teen Nick Clark (Frank Dillane) reacting to a human eating another human’s face like it is mind-shatteringly disturbing, and not an annoying inconvenience. I’d rather see people fleeing in confused horror from zombies than mope for days on end in an abandoned prison like “well this is my life now.” It is far more alarming to watch characters fear the walking dead than be the walking dead. At the very least, the name makes sense.

But where Fear the Walking Dead stumbles is that it is way too interested in making sure we understand the personality quirks of our main characters. Again, Nick is a junkie and thinks he hallucinated any and all zombie activity because of laced drugs. Travis is a divorced English teacher with an estranged son, but he’s currently dating Nick’s mother Madison (Kim Dickens). Madison is a guidance counselor at the high school that needs to learn it is definitely okay to expel the kid who brings a knife to school even if you have a good relationship with him. Madison also has a daughter Alicia (Alycia Debnam-Carey) who cannot wait to go to college. She has a boyfriend, but they made plans to meet up later in a horror show so he is probably dead.

That’s it, and the pilot decides to keep the upcoming epidemic to the outskirts of the story. Which could have worked, if paced better. Instead, unnecessarily large chunks of the episode let us know that yes, Nick has a drug problem and his family is worried they can’t take care of him anymore and yes, Alicia is a successful student who just needs to get out of this high school town, man. (I am usually the first reviewer to harp on cheesy dialogue, but Alicia and her boyfriend’s conversations are exactly how two high school senior art students would talk before graduating. I have the Facebook posts from 2009 to prove it.)

When the slowly looming horror to come does rear its head, it is occasionally thrilling. The cold open in the drugged out church is as disorienting and visceral as Walking Dead at its best. But occasionally it’s ridiculous, almost like writers Kirkman and Dave Erickson and director Adam Davidson remembered they needed to include that story point among the family drama. Case in point: The teachers are watching news footage of a car accident victim getting off the stretcher to bite the EMTs, before cops finally have to put him down. Meanwhile, one of the teachers narrates every action in the video. It might genuinely be the most annoying 30 seconds of television so far this year. “Ah, he’s getting up! Ah, they’re shootin’ him. Ah, he’s getting up again!” This is a TV show, not a novel. We see it. We see the video.

Also, would high schools really close early because of this news footage? Either the public is aware this is serious or they’re in denial. You can’t have it both ways, Fear the Walking Dead.

The pilot ends with Nick meeting up with his former friend / current drug dealer Calvin, who takes him to a secluded area of the dried up LA river system. As anyone who has been taking in any form of entertainment since the 1920s knows, this is where characters take other characters to kill them. Which is exactly what Calvin plans to do (although I’m a little confused as to why, besides “Nick is whiny as hell” and “all drug dealers are inherently evil.”) The two struggle for a gun, and Nick shoots Calvin in the chest. Nick is a crying mess and, after finding Travis and Madison, brings them to see Calvin’s body.

Calvin’s body, of course, is now shuffling slowly towards people in the hopes of eating their flesh. This is a shocking development for Madison and Travis, who spend the final scene mostly staring wide eyed, slack jawed, and almost-bitten. But Nick, after an hour and a half of episode, is a zombie pro at this point. He runs Calvin down with a truck not once, but twice.

Which, on one hand, is a strange development and a lingering problem for the Walking Dead universe as a whole. Sometimes the “adapt or die” premise is sped up, and the character who spent half an hour blubbering and apologizing for killing someone spends the back half hour with guns blazing. Yes, Nick had seen affects of the walking dead earlier, but I don’t know if he understood it enough for his moral compass to immediately point to “kill with a truck.” Not five minutes earlier, he was crying in his mother’s arms.

But on the other hand, that is actually interesting in the world of Fear the Walking Dead. Apparently, “how not to die” in this scenario is to adapt to the times, to reach peak bearded Rick Grimes, and do it quickly.

Funny enough, there are actually two versions of To Build a Fire. The well-known version was published in 1908 but the original, written in 1902, ends with the main character suffering frostbite but surviving the cold. He comes out the other side of his terrifying experience scarred mentally and physically, but wiser. Both have their merits. Fear the Walking Dead, slow in its pilot but promising, needs to decide which version of this story it wants to be. Does it want to emphasize the importance of “not dying,” or illustrate how characters can see death literally walking towards them, and realizing that “not dying” is not the same as living? 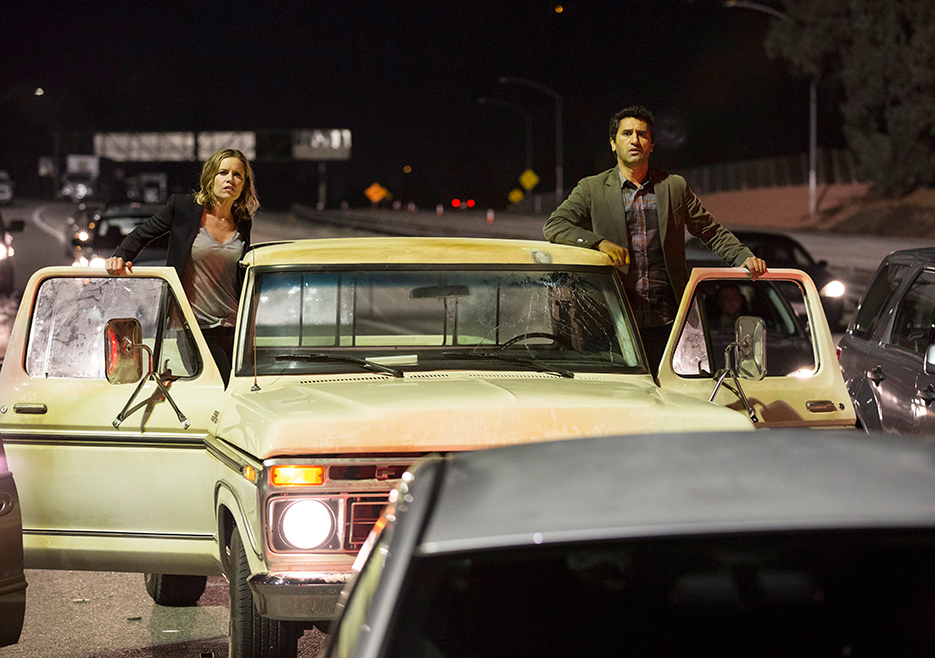