Shortly after, he was shot by a white police officer, Darren Wilson. Ever since, the St. Louis suburb has been plagued by civil disorder at the heart of controversy over the systemic racism within police departments across the United States.

A local chapter of the national organization, Oath Keepers, has sparked additional controversy over its presence during protests in the city, as members patrolled the streets of Ferguson armed with assault rifles, legally permitted by the state of Missouri’s open carry law that allows individuals with concealed weapons permits to openly display firearms, unless it is done in an “angry or threatening manner.”

Recently the group has gained attention with the announcement a few weeks ago that they planned to arm protesters of color to demonstrate that gun laws and the freedoms granted by Missouri’s open carry law should be upheld without bias to race. According to Sam Andrews, the organization’s board of directors and founder Stewart Rhodes objected to holding the demonstration, causing Mr. Andrews and the rest of the members of his chapter to sever ties with the organization. Mr. Andrews cited the group YETI (You Exterminating Tyrant Ideology), will continue planning and executing the operation, working with a City of Ferguson liaison to ensure the demonstration doesn’t interfere with traffic and safety precautions are taken. Mr. Andrews also claims the Oath Keepers leadership has provoked several chapters across the country to splinter from the organization due to racist sentiments from its leadership.

Both the St. Louis County Police Department and protesters have criticized the former Ferguson Oath Keepers chapter, which some regard as a right wing “patriots” militia. Its presence during Ferguson protests seemingly capitalize on the high profile racial tensions of Ferguson to promote their pro-gun agendas, but for Sam Andrews, the head of the Ferguson chapter of Oath Keepers, the protests are just an opportunity to serve the community.

Despite breaking with the parent organization, Mr. Andrews still strongly believes that its presence played a role in keeping the piece. In an exclusive phone interview with the Observer, Mr. Andrews made a startling comparison.

“On Sunday, August 9th, we didn’t patrol and there were 57 shots fired and over 150 arrests, including injuries sustained by reporters from the New York Times and St. Louis Dispatch. The next night, we did patrol and there were only 3 shots and 22 arrests before we began at 9 PM, and none occurred once we got out there.”

According to Mr. Andrews, the Oath Keepers compensates for the empty promises of St. Louis County Police Chief Jon Belmar to protect the city and its citizens. “Belmar has told a lot of lies and put misinformation about us out into the media,” added Mr. Andrews, suggesting that his new splinter group Yeti will serve much the same function but without the racial baiting.

“We can’t fix Ferguson’s problems by giving every citizen a gun, but through proper safety and training, we can help citizens protect themselves and their property without having to rely on an over-militarized police force. Belmar has exhibited his ignorance of Missouri’s gun laws, which is insane, because if you don’t know the gun laws and the citizens’ rights surrounding guns, you shouldn’t even be carrying one.” Mr. Andrews believes the demonstration will prove important in standing up to county police forces that have reached beyond their authoritative bounds on many occasions. Despite these sentiments, Mr. Andrews doesn’t overtly side with the protesters or the police force, citing that both groups have to purge the unlawful members within their ranks before peace in Ferguson can be achieved.

St. Louis County Police Chief Jon Belmar has called the group’s actions during protests “both unnecessary and inflammatory.” The Southern Poverty Law Center has claimed the Oath Keepers, including the Ferguson chapter, have “dangerously inflamed convictions of conspiracy” and a “history of complicating volatile situations.”

Mr. Andrews described these criticisms as false accusations to try and portray his group as a racist hate group, which is why he sought to put further distance between his new group and its former parent. “We wouldn’t tolerate any member of our group showing a semblance of bias.” Mr. Andrews adds that protesters and police have to abide by the same set of rules, honoring the constitutional rights of everyone. “We accept all individuals from all walks of life. All human life is sacred and we’re just here to protect people, whoever they are.” 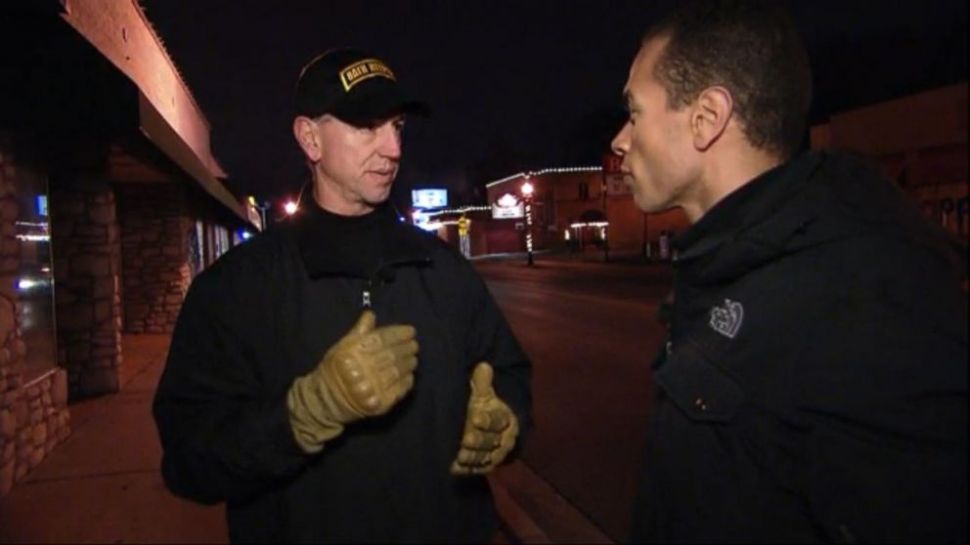