Lesniak at a Bayonne hearing in June.

This week, the Superior Court upheld a ruling that would force ExxonMobil to pay $225 million to the state for environmental damages caused by the corporation’s oil refineries in Bayonne in Linden.

The Christie administration is lauding this as a victory, claiming that the corporation originally insisted they owed nothing and this deal was the first time they agreed to contribute a significant sum. Others, like state Senator Ray Lesniak, believe that the ruling is unfair to N.J. residents and want the corporation to shell out significantly more. Around $8.75 billion more.

The Exxon issue has been a point of contention in New Jersey since the lawsuit was first filed in 2004. The Christie administration has admitted that damages to wetlands were “staggering,” yet the agreement—pennies on the dollar to the original suit—is seen by many as Christie’s way of brushing environmental issues under the rug.

This week we take a look at this issue because, although a settlement has been reached, it is not likely to drop off the radar any time soon.

In 2004, back when Democrat Jim McGreevey was still governor, the state filed a lawsuit against ExxonMobil for around $8.9 billion, alleging that the staggering amount was needed to remediate oil spill issues in the northern part of the state. Fast forward to 2012, when Christie was already at the helm. Then, he claimed that the state would accept $325 million, a significantly lower sum than the McGreevey and Governor John Corzine administrations were pursuing. ExxonMobil did not accept that amount. Now, three more years have passed and the number has tumbled to the even-lower figure of $225 million.

State Senator Ray Lesniak (D-2) is a long-time environmental advocate. With the Sierra Club in his corner, last month, Lesniak called for the invalidation of the settlement, claiming that it barely scratched the surface of what was needed. Christie has been fighting those claims, hailing the deal for being a victory against a corporate client.

Lesniak is expected to launch an appeal over the deal. He believes that Judge Michael J. Hogan of the Superior Court can be swayed due to acknowledgement that the settlement is “far smaller than the estimated $8.9 billion in damages.” Also, according to Lesniak, the indefinite delay of the $1 billion Morses Creek cleanup in Union County—an area which is both a wildlife habitat and flooding buffer—is in direct violation of the Spill Act.

Lesniak has environmental groups on his side. Today, the Sierra Club released a statement saying that the deal “isn’t a settlement; it’s a sellout.” Other groups in his corner include Environment New Jersey, the Delaware Riverkeeper, and Clean Water Action.

An appeal has the potential to keep the issue on the table well in to the next gubernatorial administration. With Lesniak vying for the spot alongside Jersey City Mayor Steve Fulop—who has made environmentally conscious policies a part of his tenure—the issue could likely fall into the hands of a more “green” governor. 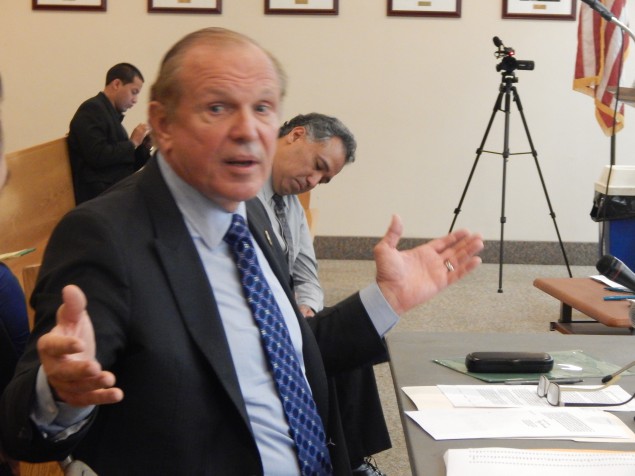