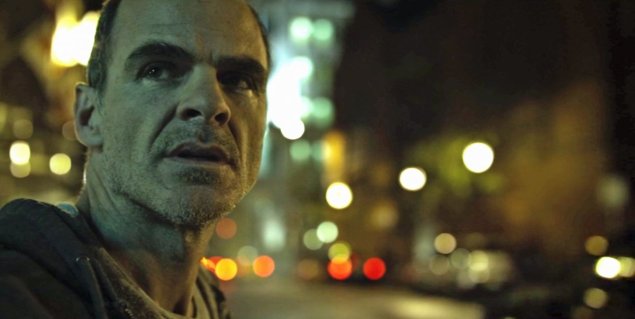 Michael Kelly as Doug Stamper on House of Cards. (Netflix)

(Spoilers for House of Cards abound! Read at your own risk.)

Season three of House of Cards is Doug Stamper’s moment to shine. Recovering from the traumatic brain injury and hobbled by a cane, the presidential henchman’s tightly coiled persona begins to unravel in gruesome ways. He slaps his doctor in the face out of frustration, and breaks his arm so severely after falling in the shower you can glimpse the bone. He starts self-medicating with painkillers and syringes full of alcohol, and before long lost all the vestiges of self-control that had been his predominant character trait for two seasons. We see Doug’s home life–as sterile as you imagine his soul to be–become overrun by his well-adjusted and well-meaning brother and his wife (who shows up announcing she’s from “a big family of huggers,” as Doug looks appropriately horrified); as well as the nephews that he had never met. President Frank Underwood and wife Claire distance themselves from him, and he goes to the opposition with potentially ruinous material about Claire’s abortion before revealing it to be a long con: his loyalty to Frank had never wavered, even as his sense of self disintegrated.

In a period marked by a cultural obsession with the inner lives of fixers–Ray Donovan, Olivia Pope and Michael Clayton–Underwood’s right hand man was long the white space in House of Cards starkly-rendered painting: his brutal efficiency, lack of theatrics, and unquestioned loyalty to the Underwoods could have certainly kept him as a dependable (if vague) loyalist.

But not as played by actor Michael Kelly.

While Mr. Kelly’s Emmy nomination this year has put him in a league with formidable contenders–Peter Dinklage as Tyrion in Game of Thrones, Jonathan Banks in Breaking Bad’s prequel Better Call Saul, Alan Cumming’s oozy Eli Gold on The Good Wife and Jim Carter, butler of Downton Abbey–all these terrific characters have all been utilized better in better seasons. (The exception being another Netflix nominee: Ben Mendelsohn as the shiftless brother Danny Rayburn in the first season of Bloodline.)  But Doug Stamper never got more evil, or more interesting, than in HoC’s most recent season.

Despite what David Simon of The Wire might have you believe, residents of Baltimore–the home of Crabby Dicks, the Ravens, John Waters and Divine– aren’t well-known for their perspicacity. Yet on a recent sunny Thursday afternoon at Thames Street Oyster House, I witnessed a perhaps singular experience between of fandom when a man approached Mr. Kelly during our lunch interview.

After asking for a photo opp with his son, and telling us about his other son, at Georgetown (also a fan of the show!), the man clapped Kelly on the back. “I love your acting, man,” he announced. “It’s really…subtle.”

Later, a woman in a cast would call out from the street, with a touch less nuance, “I KNOW YOU! WE LOVE YOU IN THAT SHOW!”

If acting was to be judged by how far a person’s own personality is subsumed to inhabit a character, Mr. Kelly is an obvious choice to win for his Emmy nomination this year for his portrayal of an increasingly conflicted fixer whose feelings never quite reach the murky surface of his expressions. Loose-limbed, laid-back and with a constant cock-eye grin, Mr. Kelly is the kind of guy who, when telling a story about his friend Woody Harrelson, makes you think “Of course this guy is friends with Woody Harrelson.”

Kelly looks so different in person than he does in the multitude of shady government henchman roles he’s held up to this point, it’s strange to see increasingly intoxicated Bal’morians clocking him at a glance. Especially since he–both Kelly and his fixer alter-ego– are so restrained (at least for the first two seasons) on a show that acts as a vehicle for much bigger names than their own.

“There this one note I took away from my first call with (showrunner) Beau (Willimon),” Kelly recalled at the Oyster Bar, cracking open a lobster claw and sucking down the meat. “He said, ‘Look, the main thing is that in the first season, I don’t want you to emote.’”

Kelly punctuates many of his stories with that sort of easily-ready, lackadaisical Southern chuckle most associated with a pre-2014 Matthew McConaughey. “I was like ‘All right, I can definitely do that. I can ‘not emote.’” 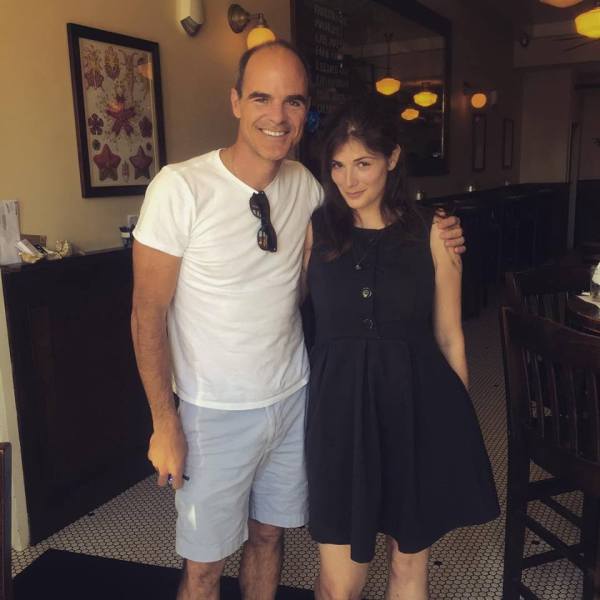 Actor Michael Kelly and I pose for the cutest “last known location” photo ever.

But Kelly himself emotes quite a bit, and the comment that most resonates with him is the several times he’s heard (or read on social media) people talking about seeing him in real life and being “creeped out” by a smiling Doug Stamper.  While auditioning for the role of John Krakauer for the upcoming film Everest, he watched videos of the Into Thin Air author and asked his agent if casting wanted him to “do John.”

“No,” she explained. “They want you to do yourself.” He sent back his audition tape reading the lines in a naturalistic way, and heard back an hour later with a note. “That was great, but we really want to see more Michael Kelly.”

They weren’t talking about the REAL Kelly, but the various government-affiliated suits that had culminated in the ultimate role of Stamper: a sort of ubermensch of hench. A mentee of Arthur Penn, the former Artistic Director at the Actors Studio, Kelly’s breakout role came playing a sheriff’s stooge after stage managing and understudying all the male roles for one of the studio’s productions, and he’s played to type ever since. You can see him if you’re looking, playing some agent of law and/or order in The Adjustment Bureau, Changeling, Now You See Me, Generation Kill, Kojack, Dawn of the Dead, Law-Abiding Citizen, The Good Wife, Persons of Interest, Criminal Minds: Suspect Behavior and the upcoming Julia Roberts vehicle, The Secret in Their Eyes.

“I always had work,” he said about his early years in acting. “I just never quite made a living.”

Kelly had auditioned over a period of months for different roles in House of Cards–including Peter Russo, The Washington Herald’s political editor Lucas Goodwin as well as its editor-in-chief, Tom Hammerschmidt–though he was not prepared for director David Fincher’s cryptic note at the end of their first meeting: he could play any of the parts, he was told, but Fincher wanted him to try for another character on tape, when he got home. Kelly wracked his brain, trying to think of who else was in the show, but it was his manager who pointed out that the most likely character was Stamper, a character who is at first presented as more a tool of power than a person with his own motivations and agency.

The initial scripts didn’t bother Kelly: in fact, “I said, ‘Look, as long as we keep seeing him do these devious little things he’s going to do, then that’s interesting to me. The guy who is going to fix shit.’” 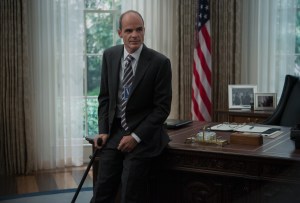 But it’s when Stamper stops being able to fix shit that his character takes center stage, revealing himself to be not only capable of feelings, but frighteningly incapable of controlling them. In a cliffhanger second season finale, the camera closes in on what we assume to be Doug’s corpse: his lifeless body, alone in the woods and bleeding from the head, a result of being hit with a rock by his fleeing captive Rachel Posner, the former prostitute coerced by the Underwood camp into leading Congressman Peter Russo off the wagon. Over the two seasons, Stamper had become increasingly obsessed and possessive of Rachel, a complicated relationship that Kelly describes as “part paternal, part wanting her to mother him, and partly sexual.” (In a certain ultra-creepy second season moment, he forces her to read to him from A Tale of Two Cities; a book his mother had read to him, while he curls up next to her, the implication being that he might kill her girlfriend Lisa if she doesn’t comply.)

“There’s this…this person, she’s not even in my life except on the edges, making things blurrier,” Doug admits in an AA meeting–one of the few things we learn about his character first season is that he is sober. “It doesn’t tempt me to drink, it’s more like she feels what’s like when I was drinking, when I couldn’t get enough. No matter how many drinks I had I wanted another. I…I don’t want to be with her. I mean I…I do, but…more like she’s my daughter…my mother…I don’t know, this is fucked up…”

[youtube https://www.youtube.com/watch?v=e8_wyuMqIIU%5D
“I should cut her off,” he finally concludes. “The way I did with booze.”

All the while, he hunts for Rachel. And by the time he eventually finds her, ties her up in the back of a van, and digs the grave for her out in the middle of the desert–that Kelly’s performance becomes one of the most compelling of 2015, not the least because he speaks and emotes so little that even the slightest flicker of doubt on his face register as deeply as any fourth-wall speechifying of Frank’s. By the time Stamper’s head swivels reluctantly when Rachel demands he looks her in the eyes so she can plead for his life, Stamper has been dragged, Nosferatu-like, from the shadows of political espionage and we see him clearly for the first time: not a man who felt too little, but one who perhaps felt too much. In a show oversaturated with swagger, Stamper was a man whose still waters ran very, very deep. And his ultimate decision regarding Rachel came at no small cost.

“This wasn’t a story about recovery,” Kelly said of his character’s arc: one that could gamely sum up the entire thrust of the third season of House of Cards. “This was a story about finding a way back to the Underwoods.” 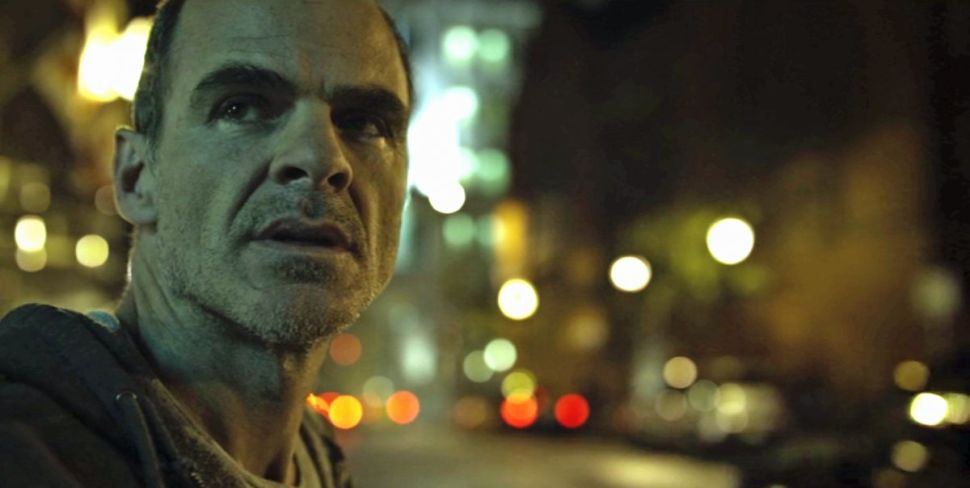