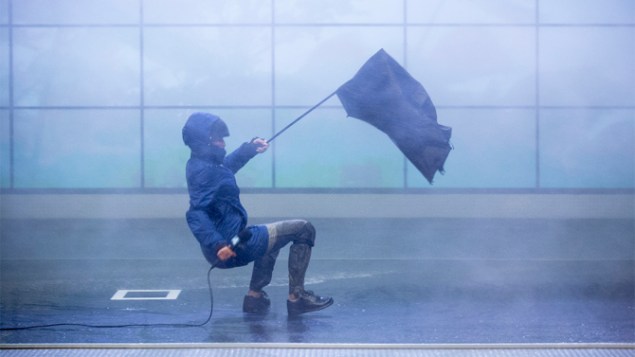 Hilarious spoof meets reality competition show. Only the genius minds behind Funny or Die could take the all too familiar reality show competition format and turn it on its ear, making a hybrid show that’s laugh out loud funny and quite serious at the same time.

The results are available for public viewing via Funny or Die Presents America’s Next Weatherman which debuts on TBS Saturday night. The winner of  ANW receives $100,000 and an appearance forecasting the weather on New Day on CNN, TBS’s sister network.

The series was created under the guiding hand of reality competition guru Mark Burnett, he of Survivor, Shark Tank, The Apprentice and The Voice – and about a bazillion other shows.

“Mark and his company came to us a few years ago and they said, ‘what if we do a competition show with all the troupes – challenges and eliminations and all of those things we culturally know, but what if we did it to find a weatherman,’” explains Joe Farrell, Executive Producer of ANW.  “We spent a good amount of time developing it and created the challenges with real stakes. We didn’t want it to feel too much like a spoof because we want you to care about who wins. Mark straight out said to us, ‘you can poke fun at everything I do, but you have to make people care about people winning and losing.’ So we took that to heart when we created this series.”

When the call went out for contestants, Farrell admits that he was surprised by the response. “It was really amazing to see how many people just love the weather!”

After a nationwide search, the field was narrowed to 12 aspiring forecasters who run the gamut from, “People still in school, people who have been on TV, some for several years, and a few amateur storm chasers,” says Farrell. “We were truly surprised by how many people spend their time following the radar and the Doppler and things like that.  This show doesn’t make fun of people because of that interest. It sort of celebrates what some might consider an eccentric interest, but it’s a very real interest.”

Before a single episode has even aired, Farrell says some real life meteorologists have already tried to throw some shade on the series. “Yeah, there are some meteorologists that are already up in arms about this thinking that we’re making fun of it what they do and while we do poke fun at it we’re also showing how really hard it is. I think everyone deep down thinks, ‘oh I could do that and it’s really a lot harder than it looks.”

Farrell knows that the subject matter of the weather is no laughing matter either, saying, “We had to be very conscientious because the weather for many people isn’t something that they find inherently funny because it can be deadly. What we’re focusing on here is the reporting aspect of it and how important that role really is.”

Featured in the series is a custom made television studio where the contestants face challenges, are judged by a panel of experts, and where the elimination rounds occur. “We worked with Mark on establishing the look of the series,” says Farrell. “He talked about how on Survivor there’s the island and in The Apprentice you have the boardroom and on The Voice you have the spinning chair. All of those shows have a world and on this series that world we decided that that world has to be a local news station, so we have our studio.”

Like any other competition series, the contestants are faced with tasks that they need to overcome to continue on the show. “We were able to highlight skills that you really need to have to be a weatherman. It might have been [NBC Weatherman] Al Roker, but someone said, ‘The weatherman on a news team needs to be able to have fun – they need to be able to deliver the tough weather stories but at the same time they need to be able to go to the state fair and be with the people in the community and be likeable.’ So we needed to lean into all areas not just the science and not just the silliness.”

Farrell points to a rather unconventional method his team used to create the challenges for the contestants.  “Well, we looked at a lot of news bloopers online.  I admit it, I love bloopers. And, everyone can identify with something going wrong when you’re on live television. It could be a failure with the green screen or a name that trips someone up. So we looked at that stuff and we took the things that really could happen to you when you’re a news professional and then we put these people in those extreme situations to see how they would handle it.”

Serving as host on ANW is actor Matt Oberg (The Comedians), who is clearly modeling himself after other reality show hosts, with a bit of a twist. “Yeah, he’s this bumbling guy who’s a bit of a stuffed shirt and yet he’s also deeply insecure.  We didn’t want him to be mean or aggressive but you see that many ways he’s trying to make it himself.  He’s a great improviser and we love what he came up with in this role. Sometimes the contestants aren’t sure what to make of him and his quips and that creates some very funny moments.”

Farrell admits that the title of the series itself might court just a bit of controversy. “Yes, it’s called America’s Next Weather-MAN, but that’s only because so many people use that term. We have some amazing women on the show so it’s not like we’re excluding anyone, it’s just the best title, rather than using ‘weatherperson’ which just sounds awkward. So we’re in on the joke that the title is a little inappropriate.”

What turned out not to be not altogether funny for Farrell was his immediate connection with the contestants and his concern about their status as the series progressed.  “We’d been developing the comedy part for so long and we knew how funny some of this stuff could be and I was all into that so when we actually had people coming in to compete, I was completely surprised by how much I cared about them right away! Each of them deserves to win. I couldn’t get over how sad and bad I felt when people would get eliminated. Mark [Burnett] said in one of our first meetings that by the second episode viewers need to think, ‘I can’t believe I’m still watching this silly show, but gosh darn it, I need to know who wins.’ It didn’t take me until the second episode, I was in right away and I couldn’t believe how emotionally invested I was from the start.”

ANW is an amalgam of comedy and competition in the truest sense, assures Farrell, as he says, “Yes, this show is really silly at times and you can’t believe what people are willing to do, but at the same time, the stakes are very real – there’s a shot at a dream job and $100,000 on the line. We made a very concerted effort to find a balance so that we weren’t all spoof and we’re not an all-out battle either. I think this show celebrates competition reality in a very unique way, so if you like that I think you’ll feel satisfied. I think we’re going to poke fun at the tropes in ways that people haven’t seen before without making people feel bad for loving this kind of show. I love Survivor, I watch it every season, but I’m able to poke fun at it with this show and that doesn’t make me like it any less. So check it out. Come for the fun and I guarantee you’ll stay to see who becomes America’s Next Weatherman.”

America’s Next Weatherman premieres Saturday at 11e/p on TBS. 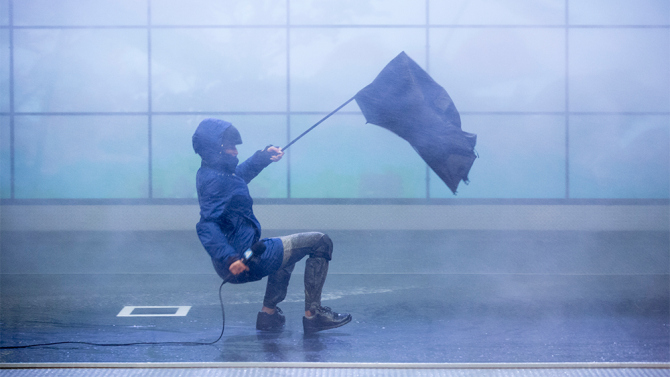