Surprised? Why would I be surprised that a back-up New York Jets’ linebacker sucker-punched Geno Smith in the locker room and broke his jaw—perhaps also ending Smith’s role as the team’s starting quarterback?

So the quarterback being socked in the jaw over a $600 debt is merely one in a series of existential moments for this team, many of which I witnessed first hand, and so many of which involved quarterbacks. I’ve often wondered whether these off-the-field things happened in, say, Cincinnati, or Kansas City. Or do we have a louder voice here in New York and odd doings get magnified? Or is it just Jets’ karma?

I had been covering the team for just a few weeks back in 1975, and I started to wonder about Joe Namath’s odd gait. It turns out just before training camp, he was permanently slowed when he tore a hamstring while -skiing in the Bahamas. But the public didn’t learn about that for two years. He had essentially lost his mobility while all of us wondered how come he wasn’t as good as he used to be.

I’ve often wondered whether these off-the-field things happened in, say, Cincinnati, or Kansas City. Or do we have a louder voice here in New York and odd doings get magnified? Or is it just Jets’ karma?

In fact, quarterbacks on the Jets seemed to be cursed. Joe’s successor, Richard Todd, came in limping one day. “What happened?” I asked.

He explained he had been watching television. He got up to turn it off, banged his foot into something—and broke a big toe. He finally returned to practice—and a teammate stepped on the other big toe, breaking it.

And Todd’s successor, Matt Robinson? Well, he decided to arm-wrestle with a teammate in their apartment a few days before the season began. Robinson tore his right thumb, but hid the injury from Coach Walt Michaels. When Robinson attempted a pass late in the opening game, he couldn’t throw it far enough, it was intercepted, and the Jets lost. Michaels, so angered that Robinson had hid the injury, never let Robinson into a game again.

But not everything bad happens as a result of contact. The 1984 Jets had started well, and cornerback Bobby Jackson was a leader of the defense. Before one practice he was stretching his hamstring—and tore it, popping it so loudly that teammates in the locker room thought a gun had gone off.

That same season, Ken O’ Brien, the California golden boy, lost his quarterback starting job because he had to appear at a training-camp trial that involved his teammate, Mark Gastineau. Both had gotten into a bar fight (not with each other) and the trial dragged on so long that O’Brien couldn’t keep his job.

Some years later, Neil O’Donnell was returning to his starter’s role with the Jets after being sidelined with a shoulder injury. As he had done hundreds of times before, he warmed up before the game. And then, somehow, impossibly, he tripped on the painted yard-marker and tore a calf muscle.

Sometimes Jets get injured in a game—doing it to themselves. Like the time in 1985 fullback Tony Paige, the team’s leading touchdown-scorer, celebrated by leaping in the end zone and landing on his ankle, which, of course, he sprained.

And who could forget that Mark Sanchez suffered a blow to his pride when he ran into the sizable ass of teammate Brandon Moore in 2012. Sanchez lost the ball, which was returned for a touchdown, a play immortalized as the “butt-fumble.”

But I have my own favorite among all the ass-backward things that have happened to the Jets. This was a locker-room moment. Gastineau had fallen, hard, for Brigitte Nielsen, the 6-foot Swedish actress and ex-wife of Sylvester Stallone. And Gastineau wanted everyone to know it.

“Watch this,” he said in the locker room before one practice. He took off his underwear. There, on his left buttocks, he had tattooed his inamorata’s name, “Gitte.” He paraded around, shaking his behind.

The next day one of the Jets alerted me: “Don’t go away.” On cue, all the players took off their pants, dropped their jocks, and showed their fannies. They all had the word “Gitte” painted on. So it’s not all tears with this team. It only seems that way. 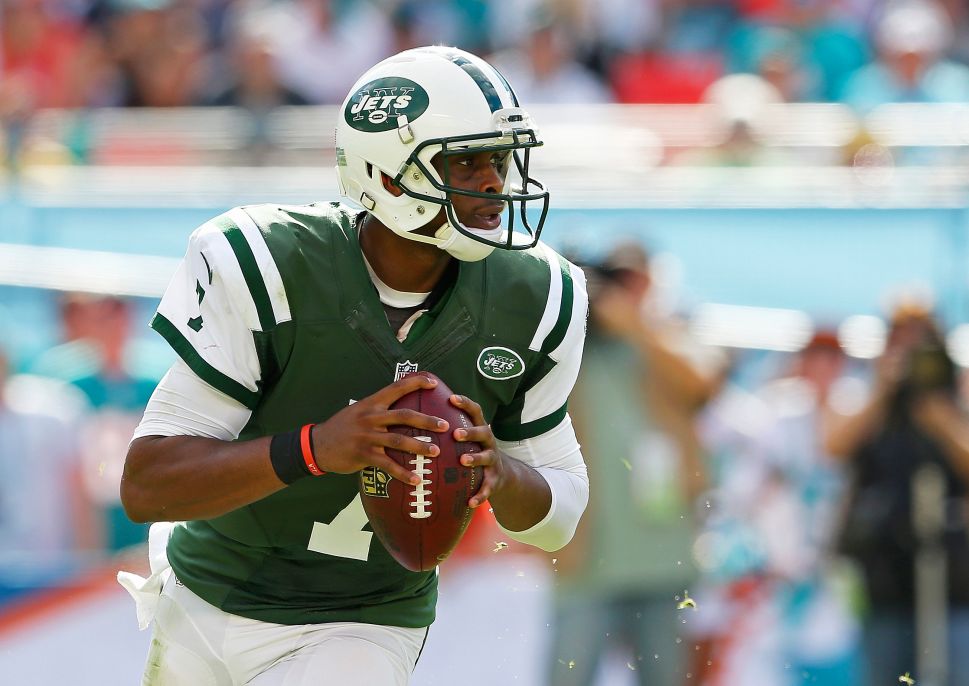