It has been a busy couple of months for Gigi Hadid. She was named the new face of Topshop, posed for W magazine’s September cover, and even adopted a kitten.

But let it be known Ms. Hadid is not taking any breaks to soak up the last rays of summer. The model jetted to Sydney, Australia this week, where she has been promoting Guess’ newly-launched Spring 2015 collection.

August 4: Ms. Hadid met with fans at Myer Macquarie Centre at 1 p.m., wearing head-to-toe Guess. It may currently be winter in the Southern Hemisphere city, but that did not stop Ms. Hadid from wearing her hair in beachy blond waves.

That same day, Ms. Hadid wore a black Marciano dress to the launch of Guess’ Spring 2015 Collection at The Butler in Potts Point.

August 5: Today, Ms. Hadid made an appearance at Guess’ Bondi Junction store at 2 p.m., wearing a Marciano top and Guess pants. Fans took to Twitter to share coveted photos of themselves with Ms. Hadid.

Later, Ms. Hadid donned a white Marciano dress with a plunging neckline to hit up the launch of the David Jones Spring/Summer 2015 collection. When it came to her hair, she swapped the loose waves of the day before for a straighter, sleeker look.

August 6: Ms. Hadid visited with fans at the Westfield Miranda shopping center. A fan, who goes by @oahesis on Twitter, shared the following photo on the social media site:

We hope Ms. Hadid at least gets to relax in sweats on the plane ride home. 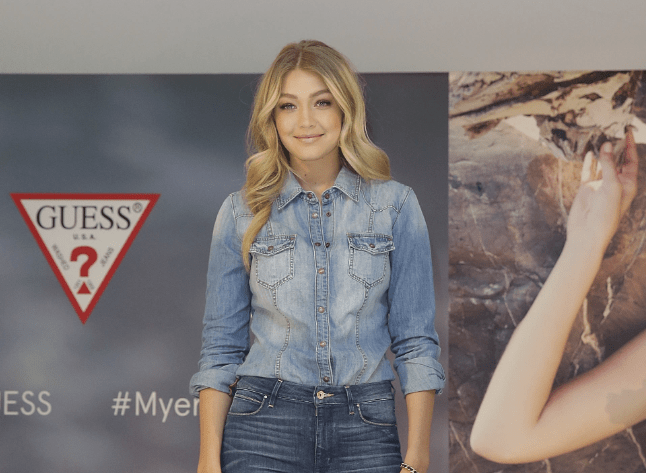