The national organization behind a recent media blitz demanding the resignation of the New York City Housing Authority chairwoman has simultaneously been trying to sell politicians on a proposal that could allow the group to develop under-utilized public housing property, a proposal that would undermine her plans for revitalizing the moribund authority, the Observer has learned—and helping them is an ambitious Brooklyn congressman rumored to be eyeing a challenge to Mr. de Blasio in 2017.

Last month, staffers for several Brooklyn elected officials received an invitation to a July 22 meeting in the district office of Congressman Hakeem Jeffries at the Shirley Chisholm State Office Building in the neighborhood of Fort Greene, Brooklyn. The purpose of the conference was to hear a proposal to “infill” large tracts of open space at public housing developments with between 10,000 and 20,000 units of senior citizen housing. Presenting the plan were leaders of the Metro Industrial Areas Foundation, a faith-based organization that has developed large numbers of low-income homes in impoverished parts of the borough through its local chapter, East Brooklyn Congregations—and which has demanded Shola Olatoye, the NYCHA chair appointed by Mayor Bill de Blasio, step down.

“Congressman Jeffries in partnership with Rev. David Brawley, Father Ed Mason, Grant Lindsay and East Brooklyn Congregations and Metro Industrial Areas Foundation would like to send an invitation to staff to attend a briefing to discuss New York City public housing and the need for quality affordable housing,” a copy of the invitation, obtained by the Observer, reads. “Land is one of NYCHA’s few resources. East Brooklyn Congregations suggests that the city should use this land to develop new and affordable senior housing.”

No elected officials, not even Mr. Jeffries, were present for the meeting, though the congressman’s district director Tasia Jackson—who sent the invitation—was. Sources who attended told the Observer that the Metro-I.A.F. proposal, which the organization hoped to get support for from the various politicians represented, was poorly received by nearly all the staffers besides Ms. Jackson.

This was because Ms. Olatoye already has her own plans for “infill”—leasing or selling undeveloped plots at NYCHA properties for new construction—which are at the heart of her NextGeneration initiative to reverse years of disinvestment and massive deficits. The plan calls for using the vacant space for 13,500 below-market apartments and 3,500 market-rate units for multiple age groups, with a goal of generating some $800 million in funds for the perpetually broke authority.

Constructing new senior housing would likely not reap the same revenues for NYCHA—but it would grant the developer control over a sizable pool of federal subsidies and jobs in areas where both money and employment are scarce. Sources present at the briefing told the Observer the leaders of EBC implied that they should have a hand in building the new senior housing, and the invitation hinted as much.

“East Brooklyn Congregations and Metro Industrial Areas Foundation have built thousands of affordable homes across the city, but there is much more work to be done,” the invitation reads, noting that EBC is currently building an 81-unit senior building on a former parking lot at the Linden Houses in the neighborhood of East New York, a project approved under former Mayor Michael Bloomberg’s administration which the group claimed already has 3,000 applicants.

Just a few weeks before the meeting at Mr. Jeffries’ office, the same Metro-I.A.F./EBC leaders protested outside City Hall demanding Ms. Olatoye resign her position because of what they alleged were slow responses to tenant requests for repairs and bureaucratic ineptitude—a day after having leaked their plan to call for her ouster to the Daily News.

EBC acknowledged the meeting took place, but denied that its proposal was at odds with NextGeneration and insisted it had in no way promoted itself as a potential developer at the meeting. Nonetheless, a top official at the organization that the Observer spoke with acknowledged that the EBC plan would eat up virtually the entire capacity of the infill project as envisioned by Ms. Olatoye, whose plan would include only a limited number of units reserved exclusively for the elderly, and refused to name any other organization that could potentially build the senior housing it had proposed.

EBC told the Observer it was seeking Ms. Olatoye’s resignation to increase accountability for maintenance issues at NYCHA—and to create an “environment” more favorable to building senior housing.

“We are calling on Mayor de Blasio to require that any new housing construction on NYCHA land remain affordable and for seniors,” Mr. Lindsay, EBC’s lead organizer, said in a statement to the Observer, highlighting the growing population of aged residents in public housing. “We are in discussions with several city, state and federal officials to challenge Mayor de Blasio to get more focused on these efforts.”

EBC would not say whether it approached Mr. Jeffries and asked him to arrange the meeting, or whether he had approached them, but instead stated that it had an “ongoing relationship” with the congressman.

Mr. Jeffries, elected to the House in 2012, is viewed as one of the New York delegation’s rising stars and has become one of Mr. de Blasio’s most vocal critics in the black community—which polls show to be the mayor’s base. The congressman’s attacks on everything from what he perceives as Mr. de Blasio’s failure to enact his campaign promises of police reform to the mayor’s response to the Legionnaire’s Disease outbreak in the Bronx have fueled speculation he will challenge the mayor in the Democratic primary in 2017.

He acknowledged that his office had hosted the July 22 meeting, but claimed to have no knowledge of the specifics of the EBC plan. Still, he argued to the Observer that the concept had merit.

“The effort to create senior housing on NYCHA land is a very important one that I completely support,” the congressman told the Observer. “It’s certainly worthy of serious consideration.”

Mr. Jeffries declined to fully endorse the Metro-I.A.F. demand that Ms. Olatoye resign, but instead took the opportunity to rip the mayor.

“I don’t want to comment on personnel that’s at the discretion of the mayor of the City of New York,” he said. “I think the problem may be less about what the chairperson has been able to do, and more with respect to what is the will at City Hall to make sure public housing residents can live in the safety and dignity that they deserve.”

His rhetoric curiously echoed that of Mr. Brawley—the high-power pastor of St. Paul’s Community Baptist Church in Brownsville, Brooklyn—who penned an editorial in the Daily News the day of the demonstration for Ms. Olatoye’s resignation, a piece that also hit the mayor more than his public housing chairwoman.

“He appointed a smart and decent new chairwoman, Shola Olatoye, and then failed to provide her with the political support to do her job,” he wrote. “Far too often, the mayor uses people like Olatoye as fronts and then undermines them by micromanaging matters from City Hall.”

City Limits noted in its coverage of the City Hall rally that nearly all the invective was focused on Mr. de Blasio. Mr. Brawley stepped up his attacks on Mr. de Blasio on NY1’s Inside City Hall last month, even though the ostensible purpose of his appearance on the show was to explain the calls for Ms. Olatoye to step down.

“Not only are we asking for the chair to step down, we’re really asking for the mayor to step up. Provide leadership. How about giving some more time, hands-on time, to the issues of public housing, instead of taking the 21 days off to go around the country promoting your ideals,” he told host Errol Louis. 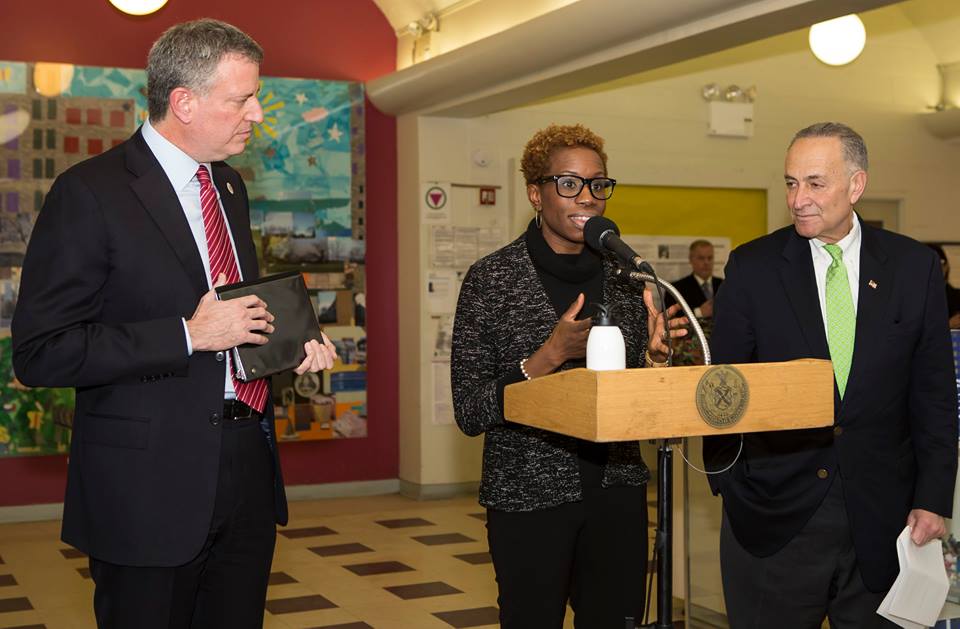