In season 3’s first episode “Antipasto,” Hannibal asked Bedelia Du Maurier a very important question after dealing ill-fated dinner guest Antony Dimmond a near fatal blow to the head. When it comes to Hannibal’s rampant carnage, is she an observer or is she a participant. It’s a question that everyone who gets absorbed into Hannibal’s orbit needs to asked themselves. Oftentimes there’s no simple answer, even though the popular belief is that Hannibal has a way of making those around him believe the choices he impressed upon them were actually their own free will.

In what looks like a giant university lecture hall, Dr. Du Maurier is selling the “observer” side of the coin, as she pushes the fiction that she was an unwilling hostage in Hannibal’s jaunt to Europe, leaning on her well-constructed alibi that she took on the Lydia Fell identity after Hannibal robbed her of her own by pumping her full of drugs.

Will Graham enters into Dr. Du Maurier’s impressive performance and all but restrains himself from breaking into a sarcastic slow clap at the end.

“You didn’t lose yourself in Hannibal,” says Will.  “You crawled so far up his ass you couldn’t be bothered.”

Will’s not wrong in pointing out the well-constructed bullshit Dr. Du Maurier spun to keep herself out of jail and from which she eventually profited. However, the venom in Will’s tone seems to be of a jealous lover confronting a romantic rival. It’s not like Will hasn’t fantasized about running off with Hannibal and now he’s standing face to face with the person who actually got to do it.

Before indulging any more of Will’s “brides of Frankenstein” trip down memory lane, she coldly strolls out of the room and informs him that he’ll have to make an appointment.

It’s during this appointment that we see more of the real Dr. Du Maurier, aka Bedelia the participant. Much of what we know about Bedelia has centered around her maybe defending herself and maybe murdering a patient who attacked her. In a flashback during a conversation with Will, we revisit a session with said patient Neil, hinted at in the season opener by a corpse played by Zachary Quinto.

At this point, Neil has had enough of being gaslit by Hannibal, who was likely using whatever he was calling light therapy to induce seizures in him. After almost swallowing his tongue while Hannibal passively watched, Neal is rattled and paranoid. The fact that Bedelia is coldly recommending Hannibal’s course of treatment isn’t calming him down.

“You’re just as twisted as he is,” Neil says, before experiencing a mild seizure and swallowing his own tongue.

Up until this point, we were led to believe that there was some grey area in Bedelia’s interaction with Neil and that she reacted out of some real or imagined fear for her life. The actuality is that instead of clearing his airway and removing his tongue from his throat, Bedelia  fisted the guy to death. Seriously, she shoved her fist down his throat rather than remove his tongue.

In the scenes with Neil/Will we get a real grasp of Bedelia’s controlled cruelty when she makes the analogy of how one should react to passing by a broken bird.

Naturally, Will wants to save the broken bird, given that it’s vulnerable and he’s a bit of a broken bird himself. Will didn’t really have to say as much, his perpetual pack of rescue dogs pretty much speaks for itself. Unsurprisingly, Bedelia responds to vulnerability by wanting to crush the bird. Perhaps this is why, unlike Will,  she was the Bride of Frankenstein that was able to actually join Hannibal behind the veil.

As for Hannibal, he’s still locked away, and threatened with the indignity of getting sprayed in the face with mace should he make too quick a move while being given the phone. Once he’s given privacy to talk to his “lawyer,” he and Dolarhyde retreat to his memory palace where the two can sit face to face in Hannibal’s office and bask in each other’s praise. Dolarhyde is actually in the real office given that he broke into Lecter’s office in order to fake the lawyer’s phone call.

Aside from that Dolarhyde believes he is indeed morphing into The Great Red Dragon, with an impressive tail and wingspan, his relationship with Reba is progressing nicely. She does her best to diminish his obvious insecurities about his appearance, relaying their coworkers general consensus that he is mysterious, handsome, and the effect of the hairlip is negligible at best. A few shots of Richard Armitage in his boxer briefs  bolster this consensus.

Their bonds are made even stronger when Dolarhyde brings Reba to the zoo hospital to check out a tranquilized tiger before it undergoes oral surgery to fix a broken tooth. The way she caresses the tiger is as sensual and intimate as the way she caresses the knots of his back dragon tattoo in their later tryst. She is the woman bathed in the sun and, like the tiger, she is the sedative that is keeping Dolarhyde’s inner monster sedate. The inner turmoil forces him to visit the actual William Blake painting and turn the priceless artifact into a meal. On the way out after consuming the artwork, he crosses paths with Will, but manages to toss the broken bird on his back, before escaping.

Still, Will saw his face. He still can’t figure out how or why Dolarhyde is choosing his victims, but he did managed to see the killer’s face. Of course, that may not mean much in the grand scheme of things now that Hannibal and Dolarhyde have linked up and are in constant communication. Plus, through some wiley maneuvering, Hannibal has grabbed Will’s address and phone number from Chilton’s fill-in secretary.

The phone scene has been depicted three times so far and Brian Cox’s performance is far and away still the best.

How do you not giggle at the way Cox’s Hannibal smarms “Well, zip that little pointer right on down to the letter G”? Mads Mikkelsen’s “I’ll dance at your wedding” was a nice touch, but he came off more like what Bedelia always described as a man wearing a carefully constructed  person suit. 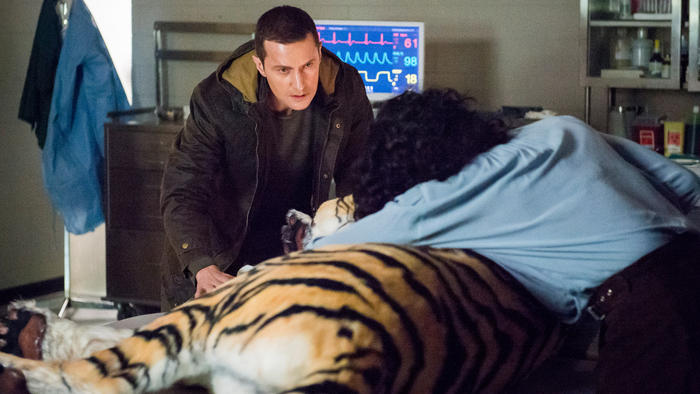